Republic UK have built up quite a case against the roving British trade ambassador, Andrew Windsor. Republic campaign manager Graham Smith sets it out.

Republic have just written to UK Trade and Investment (UKTI), the employer of Prince Andrew, to lodge a formal complaint against him and call for an investigation into his conduct. The allegations are stacking up, yet so far the UKTI has done nothing but defend him against all the evidence.

I think it is pretty clear that if anyone else had such a litany of allegations against them they would be expected to refute them clearly and unambiguously or resign. Certainly no MP or civil servant would be able to act as if nothing has happened as Andrew seems to do.

Some obvious questions arise from this: why has the government refused to act and why does Andrew continue in a role for which there must be many better qualified candidates?

It’s not difficult to conclude that the answer to both questions is “the Queen”. Such bare-faced nepotism is something you might expect in Libya or pre-revolution Egypt. It’s not something that should have any place in a democratic society.

Here is my letter to UKTI:


I am writing to submit a formal complaint against the UK Special Representative for Trade and Investment, the Duke of York.

Over the past three years a catalogue of serious allegations have been made in the media against the Duke, most recently concerning his friendship with the convicted sex offender Jeffrey Epstein and links to the Gaddafi regime in Libya.

The key allegations are as follows:

Friendship with Jeffrey Epstein
The Duke is known to be friends with Jeffrey Epstein, a businessman who spent 13 months in jail from 2008 for soliciting prostitution from underage girls. It is also alleged that the Duke holidayed and had daily massages at the Florida mansion where teenage girls were abused by Epstein.

Given the current tumult in Libya, these alleged links risk seriously damaging the UK’s international standing and have led to former Foreign Office minister Chris Bryant MP to call on the Prime Minister to ‘dispense with the services’ of the Duke.

Appearance of conflict of interest
The Duke’s official role takes him regularly to Central Asia, North Africa and the Middle East, and in recent times he has increasingly been visiting these areas privately as well. It is also widely suspected that the Duke holds significant personal business interests in these regions.

The potential for a conflict of interest is clear, yet – unlike politicians – the Duke is not required to formally declare his interests. It is therefore impossible for the public to judge whether the Duke is personally gaining from his official role.

For example, serious questions have been raised over the sale of Sunninghill, the Duke of York’s former home. It was allegedly purchased by Timur Kulibayev, the son-in-law of the president of Kazakhstan, for £3m over the asking price, even though there were no other bidders and it had been languishing unsold on the market for five years. It has since been claimed by an exiled businessman seeking asylum in Britain that laundered money was used to buy the property. Given that the Duke has visited Kazakhstan on many occasions in his official role, it essential that all his dealings are seen to be above board.

Criticism from senior diplomats
The Duke has received serious criticism, both publicly and in private, from senior figures. Sir Ivor Roberts, former ambassador to Italy, Yugoslavia and Ireland, has said that the Duke is frequently ‘rude’ and offensive to foreign dignitaries. Simon Wilson, Britain’s Deputy Head of Mission in Bahrain from 2001 to 2005, described him as ‘boorish’ and ‘rude’ and said he ‘frequently refused to follow his brief’ and did ‘exactly the opposite of what had been agreed in pre-visit meetings with his staff’.

Furthermore, Tatiana Gfoeller, Washington’s ambassador to Kyrgyzstan, wrote in a secret cable published by Wikileaks that the Duke spoke ‘cockily’ during an official engagement, leading a discussion that ‘verged on the rude’.

Comments on Al-Yamama arms deal
The Duke is is said to have condoned offering bribes for lucrative contracts during a meeting in Kyrgyzstan two years ago. In a cable published by Wikileaks, Washington’s ambassador to Kyrgyzstan Tatiana Gfoeller claims the Duke called the Serious Fraud Office ‘idiots’ for investigating claims of bribery surrounding BAE Systems’ Al-Yamama arms deal with Saudi Arabia.

Cash for access allegations
The Duke’s former wife, Sarah Ferguson, was exposed by a News of the World sting operation in which she promised to obtain access to her former husband in return for £500,000. She told the reporter: ‘That opens up everything you would ever wish for. I can open any door you want, and I will for you. Look after me and he’ll look after you … you’ll get it back tenfold.’ While the Duke categorically denies the allegations, they have yet to be formally investigated by UKTI. 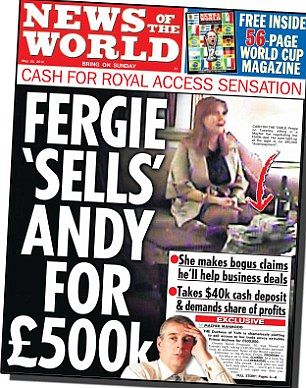 These allegations, if true, breach both the Civil Service Code of Conduct and the Seven Principles of Public Life.

The Civil Service code of Conduct states that officials must ‘always act in a way that is professional and that deserves and retains the confidence of all those with whom you have dealings’. It also states that civil servants must not ‘use information acquired in the course of your official duties to further your private interests’ or ‘be influenced by improper pressures from others or the prospect of personal gain’.

The Seven Principles of Public Life say that all those in public service must ‘act solely in terms of the public interest’, ‘submit themselves to whatever scrutiny is appropriate to their office’ and ‘declare any private interests relating to their public duties’.

Had any one of these allegations been made against another public official, such as an MP or civil servant, they would result in immediate suspension followed by an internal investigation and quite probably resignation or dismissal.

It is clear that the continued speculation about the Duke’s friendships, business interests and professional conduct risks bringing UKTI, the Department for Business, Innovation and Skills and the Foreign Office into disrepute. Yet, to my knowledge, UKTI has taken no formal action to resolve the allegations or mitigate the effect they may be having on your organisation’s reputation.

We make no claims as to the veracity of the allegations against the Duke. We simply ask that they are treated in a manner that reflects their seriousness, as they would be if made against any other public servant.

If you continue to refuse to investigate these allegations then we will have no option but to submit a complaint to the Parliamentary Commissioner for Administration.