The Australian flag on Invasion Day: To burn or not to burn?

Despite burning the Australian flag not being a crime, a heavy-handed police reaction has helped the authorities and the media to vilify and prosecute peaceful Australia Day protesters in Sydney, writes John Passant.

TO BURN OR NOT TO BURN, that is the question. New South Wales Public Order and Riot Squad answered with a premediated and violent "No!" on Invasion Day (aka Australia Day) on 26 January.

The police attacked the peaceful protest with a fire extinguisher. This is part of their attempt to suppress free speech and Indigenous protests. Such protests challenge the myth of Australia and highlight the indigenocide.

First Nations people are an everyday target of the capitalist state and their police. Their very existence challenges the myth of an equal society founded in peace and built on democracy. It highlights the indigenocide that killed and continues to kill culture, land and hundreds of thousands of people. To paraphrase Patrick Wolfe, indigenocide is a structure, not an event.

Australian society steals their children, and their land.

The Invasion Day protests put the issue not just of disadvantage but of indigenocide on the table. As the chants in Melbourne and elsewhere make clear, there is no pride in genocide.

Also being chanted by demonstrators was:

"Always was, always will be, Aboriginal land!"

Until these chants are not only recognised as true but made real then there can be no justice in Australia.

Prominent Indigenous activist Celeste Liddle argues a treaty would be the first step to healing. As I, too, have written, taking up Celeste’s argument, changing the date won’t fix the systemic problems, including the fact Australia is founded on and lives on indigenocide.

The Invasion Day protests attracted a lot of support across the country. The demonstration in Sydney was big. Police reports said 5,000. In Melbourne it was huge, with tens of thousands people there, according to The Age. Some said 50,000.  As the inaction continues – and sops like Recognition are a diversion from the real issues – and the misery continues, the anger will only increase. The protests will mobilise more people next year and 26 January will be a more and more target of anger in the years to come.

Nineteenth century reactionaries like Deputy Prime Minister Barnaby Joyce can tell us to crawl back under our rock all he wants. This "we are all Australians" bullshit is wearing thin, as young people can’t buy homes (and moving to Tamworth is not an option, Barnaby), as inequality grows and grows, and as his government attacks the most vulnerable, including pensioners, refugees and Centrelink recipients. National pride, amplified a million times on Australia Day by capitalists, their politicians and media, is about hiding those attacks and the indigenocide.

Truth "is disappeared" when it threatens the interests of capital. Thus, for example, I had the "pleasure" of reading the front page article from the Daily Telegraph on Friday – the day after Invasion Day – about the "violent" protest in Sydney. 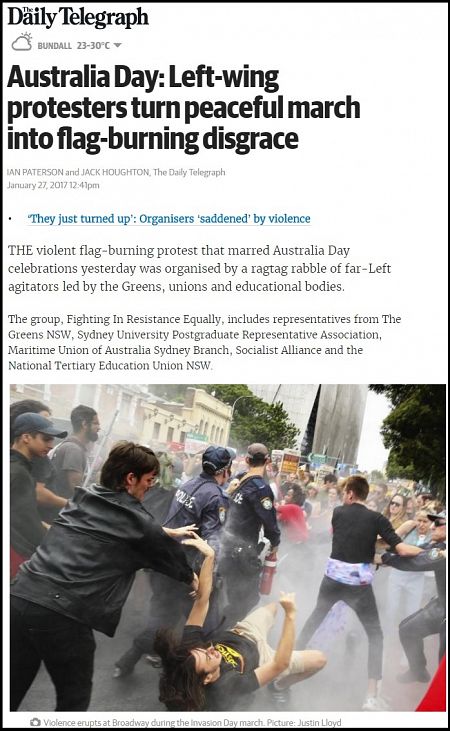 The only violence I could see in the video was from the police against protesters. That didn’t stop the Daily Telegraph talking about a flag-burning disgrace, violence, ratbags and sliming the Greens, the National Tertiary Education Union, the Maritime Union, Socialist Alliance and others for being part of it.

The cops and media claimed a protester had lit a flag. This is untrue. As to the flare, a white man ran at an Indigenous woman and let it off. There is some footage and it is being looked at to determine who this white man was. A fascist or an agent provocateur, perhaps?

One of the people there said:

"When the riot squad hit so did civilian neo-Nazis. The police allowed them to come in on their attack. I saw the Nazi brigade trying to punch Aboriginal peoples."

Contrary to the Torygraph report, police described the protest, apart from their attack on protesters, as peaceful. So which was it, straight media and cops.

Not unnaturally, protesters tried to resist the violent attack. The police injured a woman. Police arrested a man for the usual trifecta of made up charges: assaulting police, malicious damage and resisting arrest.

This time it was the turn of the Sydney Morning Herald to engage in propaganda. The person arrested was Greens’ member Hayden Williams — who also, according to the reporters, was a member of the recently formed Greens' anti-capitalist group, Left Renewal. However, reliable sources in the Greens tell me he is not, in fact,a member of Left Renewal at all.

The SMH report is part of the rapidly Murdoching Fairfax newspapers’ attempt to influence or inflame the debate about the divisions in the Greens. We couldn’t have a socialist group in the (former) party of protest but now mainstream and essentially neutered organisation, could we? Neoliberals on bikes like Richard Di Natale and Bob Brown certainly think not.

Also reported in the SMH was the allegation that Williams was the flag burner. But hang on, according to the Merdeocracy, that was Birrugan Dunn-Velasco, wasn’t it? Get your stories straight Murdoch and wannabe Murdoch Press. Leaving aside the fact there was no flag burning, those of us on the left must support anyone arrested at these protests and not fall for the lies of the police, politicians and media.

Untruths about these protests is just another example of the alternative facts the ruling class peddle to divide us all.

Of course, if an Indigenous person sets fire to the flag then it is not a tactical question — it is a question of them fighting against their oppressor. We, on the left, have to support them.

They are resisting the same group of oppressors who are also attacking wages, crippling unions, cutting health and education spending, avoiding billions in tax, locking up refugees in concentration camps and vilifying Muslims. We have a common enemy — the ruling class.

There can be no justice in Australia for all of us until there is justice for the original Australians. That means Treaty negotiations, recognition of sovereignty and paying rent. Burning the flag makes the anger and disgust with the way things are obvious.

The whole history of social and industrial movements shows that negotiating with the oppressors and exploiters does not stop them oppressing and exploiting us. Our task has to be to challenge the status quo, of things being done in the same old ruling class way, of resisting oppression and exploitation. Doing that has the potential to radicalise the movement and in its radicalisation lies the possibility of victory.