It has left many people appalled. Even Malcolm Fraser, the former prime minister, was compelled to state that Tony Abbott’s reaction to the report showed he had not changed his "bully-boy" leadership style at all.

During question time, standing beside the dispatch box, Abbott claimed that the HRC report was

The accusation is that HRC President Professor Gillian Triggs timed the report to embarrass the Government. Former Immigration Minister Scott Morrison has also been doing the rounds, saying the report doesn’t deal with “facts".

Perceived political threat is always an excellent way to gauge the real values, as opposed to the professed ones, of those under attack. We froth at the mouth when we think something is slipping away from us. What then is recommended in the report that spooks Abbott and Morrison so much? What unseemly stuff is Abbott so afraid of?

You would think that, at all levels of government, there would be a default setting that considered the impacts of policies on the well-being of children, particularly in light of the Royal Commission into sexual abuse of children in care. That leaves only one other conclusion, that the recommendations of the report are somewhat detrimental to the Government’s aims.

In way of background, the inquiry included internationally recognised medical experts in all detention centre visits and involved the expertise of a range of child psychiatrists, paediatricians and health professionals.

The overarching finding of the Inquiry

'... is that the prolonged, mandatory detention of asylum seeker children cause them significant mental and physical illness and developmental delays, in breach of Australia’s international obligations.'

Former immigration ministers Chris Bowen and Scott Morrison agreed at the Inquiry that holding children for prolonged periods in remote detention centres does not deter smugglers or asylum seekers. There is no rational explanation for doing so, unless it is being used as a form of punishment. To punish children for the mistake of their parents because it makes us feel more secure and powerful? Now that would be alarming.

The report is quite explicit. The minister for immigration and border protection has failed as guardian of the children. The report recommends that this function, so essential to the Government’s obligations and responsibilities, be taken away from the minister and bestowed upon an independent body or person.

Some things in the report are sickening to contemplate.

If the above was occurring in our local school or health centre there would be public outrage. The secrecy around Operation Sovereign Borders has hampered genuine public debate and as the report says so succinctly, HRC has given voice ‘to the otherwise unheard – and now largely unseen — asylum seekers detained in remote parts of Australia.”

To return to our initial question: Why did the Prime Minister (who only days ago declared that the “bully-boy” was no more) attack the Human Rights president with such vitriol. She is just pointing out what health experts are in total agreement about — children in our care are being mentally and physically harmed.

The answer is simple: the "Stop the Boats" answer is only a solution if you accept cruelty and misery inflicted on children as being acceptable. In fact, it is not a solution but a humanitarian disaster. A problem created by bad policy.

How come the prime minister stood at the dispatch box and skited about his Manus and Nauru solution? It appears our prime minister is the lone wolf here. Howling his sick chant of congratulatory cruelty and neglect.

The report exposes an obvious humanitarian concern. There is also a secondary one. Surely we want our future citizens in a state of sound health. So that, like the thousands of refugees before them, they can start contributing immediately to our nation. We don’t want them injured beyond repair by our dark revengeful need to humiliate and punish them.

Nations like citizens are dynamic and are either degraded by hatred or illuminated by generosity. History clearly demonstrates that when one trend gains ascendency, it may take many years to pull it back. In terms of human rights and humanitarian care, Australia presently teeters on the ridge of a watershed.

I return to the forced removal of children to another camp-child and mother torn apart-on our watch and in our time. The prime minister stands in parliament and calls for laurels and honours to be bestowed upon himself and his minister for such neglect and cruelty. If it quacks like the end of the Roman Empire...if it waddles like the end of the Roman Empire...Caligula...Nero. You can make up your own mind.

Perhaps fair-minded Australians are ready to adopt and implement this report, now that the Lone Wolf has howled outside the door. 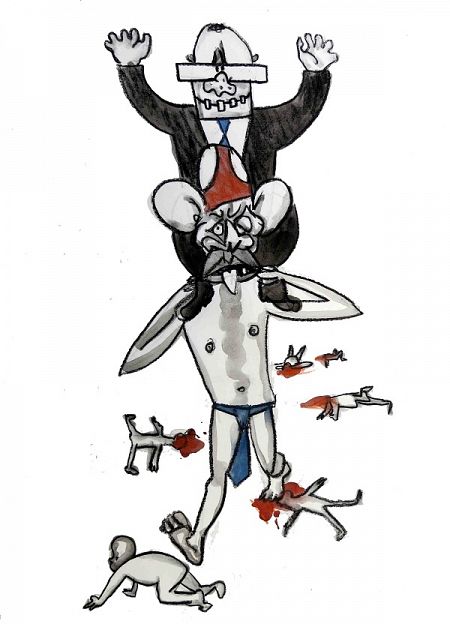 Original @JohnGrahamArt, including the above, available from the IA store.