Ireland has a long history of republican struggle. David McKenna explores the link between Irish republicanism and its influence on the Australian republican movement.

IRISH republicanism appeared in Australia at a very early stage. It is important to note that for a time the British had a policy of deporting and exiling Irish political prisoners to Botany Bay. So it is not surprising then that the two major nineteenth century rebellions in Australia were lead by Irishmen.

One such rebellion is called the Castle Hill Rebellion or alternatively the Irish Rebellion. In the Colony of NSW in March 1804, a rebellion of 200 convicts against British colonial rule was led by two Irish republicans, Philip Cunningham (a veteran of the 1798 uprising in Ireland) and William Johnston. Martial law was imposed for a time and nine of the rebels, including Cunningham, were executed. It should be conceded that the rebellion was more about harsh treatment rather than a call for an independent republic, although this was probably the unstated bedrock of the movement.

Two Irish nationalists, William O’Brien and Sir Charles Duffy both came to Australia. O’Brien, a Protestant, was associated with an armed insurrection in Ireland in 1848 before he was transported to Hobart in 1849. Duffy was an Irish nationalist and a Dublin barrister. He was imprisoned in Ireland under the Treason Felon Act but emigrated to Australia a free man in 1855. He was elected to the Victorian Legislative Assembly and rose to become the 8th Premier of Victoria. He was a vocal supporter of the move towards Federation and Irish Home Rule.

Our most famous rebellion was in December 1854 at Ballarat Victoria. In this uprising, thousands of aggrieved gold diggers led by Irishman Peter Lalor formed the Ballarat Reform League and swore to:


‘endeavour to supersede such Royal prerogative by asserting that of the people, which is the most royal of all prerogatives, as the people are the only legitimate source of all political power’.

Soon afterwards, the Eureka Stockade at Ballarat was attacked by British soldiers early on Sunday morning December 3rd 1854 resulting in the death of 22 diggers. Lalor himself suffered an amputated arm and eventually rose to become Speaker of the Victorian House of Assembly. A new, more democratic Constitution was eventually adopted. Dr. H. V. Evatt, former Leader of the Australian Labor Party wrote, ‘Australian democracy was born at Eureka’. 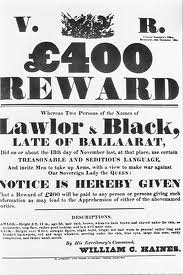 One of our most famous Irish-Australians was the bushranger Ned Kelly. His famous Jerilderie letter of 1879 had shades of republicanism throughout. For example, in his description of his nemesis Constable Fitzpatrick, he wrote:


‘And that Fitzpatrick will be the cause of greater slaughter to the Union Jack than Saint Patrick was to the snakes and toads of Ireland’.

Kelly goes on to denigrate Irish policemen as having:


‘...deserted the shamrock, the emblem of true wit and beauty to serve under a flag and nation that has destroyed massacred and murdered their fore-fathers by the greatest of torture … many a blooming Irishman rather than subdue to the Saxon yoke were flogged to death and bravely died in servile chains but true to the shamrock and a credit to Paddy’s land’.

In Ireland the bloody 1916 Easter Uprising brought Irish republicanism to a head. A treaty with Britain followed in 1922 which led to the establishment of the Irish Free State in the south. The constitution of the Irish Free State was replaced in 1937 with a new liberal democratic constitution and Ireland finally declared itself a republic in 1949. Northern Ireland remains a part of the United Kingdom to this day.

More recently the Republic of Ireland itself has become a popular source of inspiration for Australian republicans. The Constitution of Ireland is touted as a good example of a modern democratic republican constitution. The Irish constitution establishes an independent state based on a system of representative democracy and guarantees certain fundamental rights, along with a popularly elected President, the separation of powers and judicial review. The constitution may only be amended by referendum.

In particular, the Irish direct election model is often cited as a good example for Australia. Direct election is where the people exercise their sovereignty and directly elect the Head of State, as opposed to parliament simply appointing the Head of State. The Irish President is largely a ceremonial position with seven year terms. Most notably, there is a sensible process for vetting Presidential nominations which requires endorsement from the national parliament or from four city councils. It is worth remembering that one of the main reasons the 1999 republic referendum failed in Australia was because the people did not support parliamentary appointment.

Recent polling in Australia has shown that most people would support a directly elected Australian Head of State to replace the British monarch.

Interestingly, the British themselves are finally questioning the discriminatory laws governing their Royal Family. In March last year, the British parliament received a private members’ bill aimed at giving women equal succession rights to the throne and lifting the ban on royal heirs marrying Catholics. At present, women are given second preference to men in the rules of succession to the throne and Catholics are barred from marrying a member of the Royal Family. This is a throwback to the 1700s when laws were passed to require the British monarch to be a member of the Church of England as a way of stopping the Catholic sympathiser James from returning to the throne.

So where has this history of Irish republicanism led us? Today a majority of Australians support an Australian Head of State and many cannot see the benefit in having a foreign monarch as our national leader. Many feel it’s time we were lead by one of us. Many of us would support the Ballarat Reform League’s oath that “the people are the only legitimate source of all political power”.

We have reached a point in our history where we should become truly independent and democratic. We have matured as a nation since Federation in 1901. Since then we have volunteered in several major wars, survived the 1930’s Depression, hosted the Olympics Games twice, hosted the Commonwealth Games on four occasions, presided over a relatively harmonious political system, and we scrupulously uphold the rule of law. Aren’t we now mature enough to completely run our own affairs?