Immigration Minister Scott Morrison has been secretly kidnapping children and sending them to where they are certain to be arrested by a regime famed for its torture, extrajudicial killings and genocidal tendencies.

How many children he has kidnapped and sent there is not known.

He has boasted that by doing this and keeping the details from us he has "stopped the boats".

But two boats have come in the last month.

One from India, whose child passengers he has kidnapped also and proposes to send, not back to India. but to the same semi-genocidal regime.

The other came from Sri Lanka and its 41 people – 37 Sinhalese and four Tamils – have been sent back there and arrested on their return. Their crime is having left there, and some, we are told – ‘the ringleaders’ – will serve two years in a prison as ill-reputed as Abu Ghraib.

Implausibly, Scott Morrison thinks that doing these things has been in our national interest.

He calls it "taking the tough decisions" — that kidnapping and traumatising children who may then be killed by their eventual captors "sends a message" to the "people smugglers" who are, he proclaims, much worse people than himself — though they try to bring children to a good place where they might prosper, while he sends them to a bad place, where they might be orphaned, ostracised, impoverished, or killed.

‘Orwellian’ barely covers what S&M has been up to, and ‘Kafkaesque’ also seems, as an adjective, insufficient.

He has been kidnapping children and women – including pregnant women – and sending them into harm’s way and, in Parliament, boasting that his method is working and assuring the national good.

What he has done, in fact, is akin to the lynchings of black men in Alabama in the 1950s — widely thought in even those days to be unfair and to have put a damper on tourism to that scenic state.

That what he has done is a war crime seems barely worth mentioning.

Like Eichmann, he has arranged the transport of captured innocents into harm’s way. Like Pinochet, he has ‘disappeared’ their names and fates from recorded history.

Have any of his captives died yet?

Well, three young men have set themselves on fire and an amiable architect has been murdered by three or four people Morrison will not name and will save, if he can, from arrest and imprisonment.

It is likely, though not certain, one or two of his ‘transferees’ will die, or have died, in Sri Lanka.

Assisting in murder, or covering it up, is a crime in most jurisdictions — and so is child abuse, which, over three weeks of imprisonment at sea, he is about, I would think, to be guilty of, as well. In most normal jurisdictions, he would already be serving 12 to 15 years.

But this is a different place of late.

Here, he is thought a potential prime minister. Here, he is praised as Abbott’s "most effective" minister and, at forty-eight, his likely heir apparent.

How far we have come in 10 months — since the days when Oakeshott and Windsor decided what was best, and gave their reasons in public forums, and secrecy was minimal.

And sending them into harm’s way. 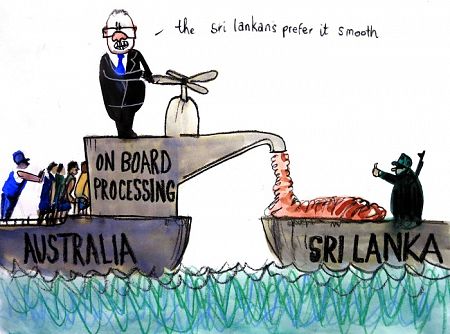