Australians mourn the passing of one of this country's superlative talents, 'La Stupenda', Dame Joan Sutherland. Whilst we should applaud her musical gifts and contribution to Australia opera, one of the aspects of Sutherland that seems to have been lost in the many obituaries she has received is that she did have a darker side to her character rarely revealed to the public. Roy McKeen looks at comments Dame Joan made to a 1994 gathering of David Flint's Australians for Constitutional Monarchy, an organisation for which Joan Sutherland was a patron.

DAME JOAN Sutherland was one of those Australians who say they love Australia but won’t live in Australia. Her home was in Switzerland where they have different income tax laws. Yet she had the audacity to sing ‘There’s no place like home’ at the Sydney Opera House during one of her rare visits “home.”

In 1994, Dame Joan addressed a lunch organized by Australians for Constitutional Monarchy and said: 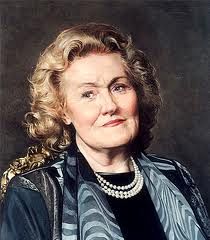 “I was brought up having a British passport and it upsets me that I don't have a British passport now. When I go to the post office to be interviewed by a Chinese or an Indian - I'm not particularly racist - but I find it ludicrous, when I've had a passport for 40 years".

The reference to her passport and being interviewed at the Post Office by a Chinese or Indian and the obligatory “I am not a racist” statement reminded me of my friend Jock McGregor.

Jock was the proud holder of an Australian passport. He had served in the Royal Australian Air Force during WWII and had been seconded to the Royal Air Force in the U.K.. He had flown more than 100 sorties over Germany in WWII and lived to tell the tale. In his retirement years Jock and his wife Margaret decided to have a trip back to the U.K. to see some old friends and visit  some of the places where he had been stationed.

On the flight from Brisbane to London Jock was seated beside a German gentleman and after a while they got to talking. After a few glasses of QANTAS’s best  Scotch the German admitted that he had been a Luftwaffe pilot in WWII and Jock told him that he had served in the RAF. To their surprise they found that they had both been in the same theatre of war at the same time. Old enmities were forgotten as they reminisced and soon they were showing each other photographs of their children and grandchildren.

When they arrived at Heathrow Airport both Jock and his German friend disembarked. To Jock’s surprise he found that there were two queues for Immigration and Customs.

One line was for European Community passport holders and the other was  marked “Others.” As Jock and Margaret waited in the “Others” queue with fellow Australians, New Zealanders and Canadians they saw the former Luftwaffe pilot whizz through with a cheery wave along with Britons returning home.

At best of times Jock had always been a fiery type. He smouldered as he saw  how quickly the EU passport holders were racing through while he and his fellow Commonwealth passport holders were kept waiting. Jock saw a door marked ‘Air Crew Only.’ He reckoned that all those sorties over Germany qualified him as Air Crew so he picked up his bags, said “Come on, Margaret”. They were confronted by a dark skinned gentleman wearing a turban who asked “Are you Air Crew?”

“A hundred sorties over Germany! Of course I’m Air Crew!” Jock barked. The startled turbaned gentleman quickly stamped Jock and Margaret’s passports and before you could say “Per Ardua Ad Astra” they were through and into the arms of waiting friends.

Every time Jock told that story he laughed uproariously and declared that he was now an Australian republican!