What would happen if Australia followed New Zealand’s example and allowed a fully democratic process to choose a national flag? With support from the Institute for Culture and Society at Western Sydney University, historian and regular IA contributor, Dr Benjamin T. Jones has designed the Alternative Australian Flag Survey.

AT THE DAWN of the twentieth century, dozens of British colonies and dominions proudly waved flags with the iconic Union Jack in the top corner.

As the empire dissolved in the wake of World War II, a process of decolonisation took place and new flags were raised — flags that symbolised independence.

With New Zealand set to vote on a new flag in March 2016, Australia stands as one of the only nations to still cling to its colonial past. Like the republic, the issue of a new Australian flag will not go away until it is finally addressed. A flag is just a piece of cloth but it is infused with meaning. Australia deserves a flag that represents the vibrant, independent nation we are — not the loyal dominion we were.

The Alternative Australian Flag Survey explores attitudes and opinions concerning this vital national symbol. Participants are invited to select their favourite from six popular designs. They are asked what elements they want in a new flag. Should there be an Indigenous symbol? Should it be green and gold? Is the Southern Cross a "must have"? How would Australians like to be represented?

Why We Need A New Flag

The most widely-held falsehood about Australian history is that independence was gained at Federation. Nothing could be further from the truth. On 1 January 1901, six British colonies combined to form a single commonwealth, a dominion of the empire. The official flag was the flag of Great Britain. The official anthem was 'God Save the Queen'. There was no such thing as Australian foreign policy, no Australian navy, no Australian citizenship, even.

Australians in 1901 were legally and psychologically British subjects. When a flag competition was held to design a flag of government – not a national flag – it was assumed that Australia’s belonging to the British Empire must be represented. The approval of King Edward VII was also required.

The Blue Ensign, the uninspiring name of our current flag, won the competition but would not officially become our national flag for half a century. Contrary to some claims, for both World Wars, the Anzacs fought under the Union Flag. Many of the services used various other flags, most notably the Red Ensign but our national flag was the same as Britain’s.

In 1953, Robert Menzies passed the Flags Act and the Queen assented the following year. This Act formally replaced the Union Flag with the Blue Ensign.

When the current flag was designed, there was little freedom or transparency. The 1901 competition was merely a suggestion that required British approval. The process was not democratic. Half a century later – without a public vote – Menzies simply conferred the Blue Ensign upon us.

Happy new year to New Zealand. Will it vote to ditch its old flag in 2016? pic.twitter.com/DFX23gqlIC

A vote on the Australian flag is long overdue but this is also notoriously difficult. Proponents for various flags tend to have one favourite which they cling to and this hurts the effort for a broad change the flag movement.

New Zealand has taken a sensible approach worth adopting. A flag panel was set up to select four credible flags. Following popular demand, a fifth was added. A preliminary referendum from 20 November to 11 December 2015 selected the most popular. The winning design, the Silver Fern, will be pitted against the current New Zealand flag in a second referendum in March.

The advantage of this system is that it allows a credible alternative to be democratically chosen. With infinite flag variations, it is almost impossible for one flag to gain adequate momentum. By offering four and then letting the people choose a favourite, critical mass can be reached. Supporters of the losing designs would be encouraged to vote for the winner.

In the same spirit, here are six credible alternatives to the current Australian flag. Even if you would prefer to keep the current flag, you are encouraged to express your opinion on these designs. There is some information below on each of the designs or you can go straight to the survey. Voting will remain open until 26 January 2016. 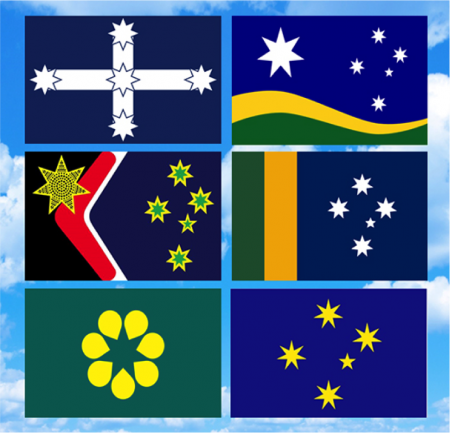 The Eureka Flag is an iconic Australian symbol associated with the Diggers who fought at the Eureka Stockade. The advantage of this flag is that it has a revolutionary history going back to 1854. It is the first flag to be called 'the Australian Flag' and it was flown as an act of rebellion against unjust mining taxes. The original flag is kept at the Museum of Australian Democracy in Ballarat.

A possible disadvantage is that the flag has been appropriated by many groups; unions, communists, white nationalists, and most recently, the Reclaim Australia movement. Some may say it has too much ideological baggage but it is certainly an powerful flag with an indisputable place in Australian history.

The Southern Horizon flag was designed by Brett Moxey and offers a simple but instantly recognisable design. It maintains the Federation Star and the Southern Cross — the two most popular elements of the Blue Ensign. The national colours of green and gold are represented in a wave. This not only makes the flag unique but also represents the hills and plains and Australia's beaches. Significantly, the Federation Star is in the top left signifying that the people and our democratic system, not the British, are the ultimate source of power in this nation.

The Reconciliation Flag was designed by Australian National University academic Dr John Blaxland. The flag is deliberately complex. The argument here is that a new flag should be embedded with meaning. It should be unique and show the world who we are as a people. The traditional Aboriginal colours of red, yellow and black acknowledge our first peoples. The seven point star represents Federation. It is comprised of 250 small yellow dots, representing the distinct indigenous cultures that occupied this land. The red, white and blue indicate our British institutions. The Southern Cross is green and gold, like the wattle.

Ausflag, an independent lobby group for a new national flag, designed a Sporting Flag in 2013. The immediate aim was to give Australian sports fans a patriotic flag to wave, especially during the Ashes and other competitions against England or Great Britain. The flag is another credible alternative to the national flag. The strength of this design is its simplicity, something schoolchildren could draw. It is apolitical with no ideological baggage of the left or right. It represents multicultural Australia, rather than privileging British heritage.

The Golden Wattle is Australia's official floral emblem and Wattle Day is celebrated on 1 September every year. Chair of the National Wattle Day Association, Terry Fewtrell, supports the Golden Wattle flag, arguing that the wattle links us to the earliest human occupation of this continent. Indigenous Australians have used wattle for thousands of years as a season marker, as a source of food and the raw material for hunting and sound instruments. The wattle emblem is made up of smaller spherical flowers. Each flower is arranged in a circle to create the Commonwealth Star in the centre. The individual flowers arranged as one, suggest the idea of diversity, and the unity of our nation.

The 1991 Ausflag competition winner was a simple blue flag with a white southern cross. Academic, Russell Kennedy has modified the Southern Cross design to include yellow stars, linking it to the Aboriginal flag. The blue is retained as a link to the current Australian flag and Torres Strait Island flag. Blue and yellow were also the original colours of the Australian coat of arms. This flag has a strong, recognisable and symmetrical design which can be supported by a genuine unifying claim that people have lived under the Southern Cross in Australia for between 40,000 and 70,000 years.

Even if you prefer another design or would like to keep the current flag, please take a few seconds to vote and express your opinion.

Voting is now open and the winning design will be announced on Australia Day 2016. Please feel free to share this survey widely. Click HERE to vote.

http://t.co/3qZt636i8w Under Turnbull, a republic could be back on the table. First step, change the flag