Why is Australia’s capital city so very different from its original design? Callum Davidson takes us on a stroll down the paths of Canberra's history to find out. 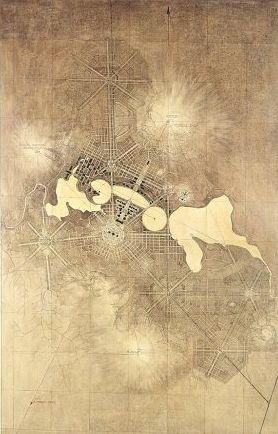 LET'S TAKE A WALK, if you will, through the bustling streets of Canberra.

We can begin at the serene and secluded Lotus Bay and take a leisurely stroll up Darwin Avenue towards Kurrajong Hill. Majestically poised atop the Hill is the towering democratic pantheon known as the Capitol — flanked either side, east to west, by the humble residences of the Prime Minister and the Governor-General. One can’t help but wonder if the distinguished occupants of these dwellings are ever inconvenienced by the raucous festivities that often occur in this open, public space.

To the north, towards the lake, we can see Parliament House resting on the lower Camp Hill. It holds a commanding position at the apex of a great swath of cream coloured government buildings that stretch symmetrically before it — all of them nestled comfortably on the banks of the ordered water feature.

Away from the Executive, let’s meander down Wellington Avenue (which does indeed point directly to the Capital of New Zealand). It’s just a short walk down this hill and we arrive at Eastlake Circle, where we can jump on a train and cross the lake.

As the train trundles along the causeway and over the marsh we can see the theatrically circular East Basin to our left and the rugged swampy sluices to our right. Not long after our departure we approach the grandiose Market Centre. With a spring in our step and a jaunty disembarkation, we arrive in the thick of it all — the main street of Canberra.

The lucky inhabitants of this leafy promenade reside in the premier postcode of the country. The infectious exuberance of daily life behind them lies in welcome contrast to the tranquil gardens and ornamental waterway to the south. As we wander along this prestigious road we can peer northwards and glimpse the casino at the base of Mount Ainslie. From here, it is nary a hop skip and jump to Vernon Hill, where we can visit the grand City Hall.

Adorning the hall, rising an imperious 295 feet, the ornate monument at the centre of the hill captures our attention before we gaze out at the wondrous vista before us. The sublime snow-capped mountains to the south provide a spectacular backdrop as we visually retrace our triangular sojourn through the capital city of Australia.

If you’re not familiar with Canberra, this journey will make no sense.

If you are familiar with Canberra – well – it’s still nonsense. That is, of course, because no such Canberra exists — but it was supposed to.

The story of how Canberra came to be is so well-known that it scarcely needs re-telling; suffice to say it was the work of a young Chicagoan and his wife, who won a competition to design the Capital city of a continent. We even named the lake after him.

Walter Burley Griffin and his eminently capable wife Marion Mahony were the architects behind what has often been described as a work of art. So why is the Bush Capital so very different from the original design?

First, let’s take a trip to the actual Canberra and visit the National Capital Exhibition, which is magnificently perched on the grassy outcrop of Regatta Point overlooking Lake Burley Griffin.

This exhibition is dedicated to the idea of Canberra. If you manage to wade through the school children, you will see maps, artefacts and records on the planning and execution of the Federal capital. Amongst the homage to the past there is a vision of the future.

There at the exhibition, meticulously crafted, is an impressive model of central Canberra with all the familiar parks and structures. There is also what, at first glance, looks to be a number of yellow bars of soap — well organised around the roads and roundabouts. On closer inspection (and instruction) they are the buildings of the future. These yellow models indicate how this glorious capital will take shape in the coming years and make its mark as a world city.

There is an ‘out of order’ sign on it.

“Yeah, we’re pulling it down soon,” a volunteer explains ruefully, “it’s no longer accurate. That’s what happens when you get politics involved — it’s like a brick wall.”

In an accidental nutshell, that is what happened to Walter and Marion Griffin’s plan. From the very beginning, there was disagreement over what shape and functions were needed. Indeed, the only complete work that Walter left behind in Canberra is the austere grave of General Bridges in the Royal Military Academy.

Walter Griffin came from the Prairie School of Architecture and the City Beautiful Movement. And – without delving into the sophisticated minutia of such things – he brought these ideas with him to the Limestone Plains. The concepts that were so artfully installed in the cities of Chicago and Washington D.C. were to be transferred to Australia: a belief in grandeur and beautification that would promote an unparalleled quality of life.

The Griffin’s plan for Canberra skilfully took the City Beautiful Movement and incorporated it into the rugged landscape of the Molonglo Valley. Unlike many of the other entries to the competition – including the two runners-up – their entry put great value on the rolling hills and the rough countryside. It brilliantly integrated man-made geometry with nature. They wanted to make it an Australian Capital.

Central to his idea of an ideal city was the interconnectedness of the necessary sections. The seats of government would mingle with the residential suburbs; the marketplace would merge with the military establishments; the civic centre would be easily accessible from the cultural institutions. And they would all focus on the lake — the grand centrepiece that the community, dignitaries or not, would gravitate to with egalitarian ease.

Sadly, anyone who has spent any time in Canberra knows this is not the way it has emerged in reality.

Walter Griffin arrived in Australia in 1913 and immediately encountered this political ‘brick wall’. After seven frustrating years fighting floodwaters and financial restrictions, Griffin retired from the project and had very little, if any, further say into how his treasured plan would continue.

The great architect would be replaced by a series of bureaucratic institutions — with confounding titles like the Federal Capital Advisory Committee and the National Capital Planning and Development Committee. Later, it was to get even more complicated.

The year after the bicentenary would see the Australian Capital Territory gain – against the will of its inhabitants – self-government. The inaugural Assembly saw the election of three members of the No Self-Government Party and one seat going to the Abolish Self-Government Coalition. Part of the reluctance to take control was the additional red tape that would inevitably ensue — and with the issue of town planning, this was absolutely the case.

Canberra planning has been carved up into two distinct jurisdictions, and if you were to look at them on a map you could be forgiven for thinking it was the cartographic equivalent of the inkblot test. It is the job of the National Capital Authority (NCA) to manage the land that is used by and on behalf of the Commonwealth. They look after such parts as the lake and the Parliamentary Triangle — areas of ‘National significance’. The rest is under the control of the Australian Capital Territory Planning and Land Authority (ACTPLA).

The problem is that the lines between these two authorities are blurry at best and have often resulted in outright confrontation. Budget cuts, animosity with local government and sometimes sheer incompetence have seriously fettered the NCA’s ability to complete, or even pursue, the Griffin legacy.

However, the NCA has a plan — called the Griffin Legacy. In this strategy, they


'...do not seek slavishly to replicate the Griffin design conceived over ninety years ago, but to recapture and enlarge upon the spirit of the concepts that inspired it.'

The noble plan has specific aims to improve Canberra and bring it closer to the original vision. The NCA’s Griffin legacy project is also responsible for the aforementioned model for the future that is now defunct and has to be removed.

There is no doubt Canberra is a marvelous and occasionally spectacular place, and the question of whether or not the city is better off having strayed from Walter and Marion Griffin’s ideal city is constantly debated. But it is certain that, especially with the looming centenary celebrations, the current NCA is incapable of delivering the lofty grandeur so many Australians desire.

They can, however, be refreshingly realistic about this fact, with the Griffin Legacy Project sagely adding:


'Canberra is still young by the standards of most cities, and much of its intended vitality is yet to be realised.'