ANZAC Day and the Frontier Wars: 'The amnesty on ignorance is over'

As we mark another ANZAC Day tomorrow, Tuesday 25 April 2017, it is  time for the people on the continent (now known as Australia) to get back to a national collective truth.

This article provides a counter-balance to the political and mainstream media’s propagation of post-truths and under reporting of significant public interest happenings by examining some of the key events that took place in 2016. Events that require a national discourse, events that world history will undoubtedly record as pivotal defining moments of truth. Soon, we will see how the 2017 ANZAC Day commemorations serve to demonstrate how we the people of Australia respond to the actuality of history.

This article will also explore some follow on suggestions from First Nation delegates who were at the Aboriginal Sovereign Tent Embassy, during the ANZAC commemorations in 2016 — notably, Ngunnawal (Canberra) custodian Uncle Patrick Lock and Warhlubal Bundjalung custodian Uncle Lewis Walker who highlight important ways to move forward on these realities. 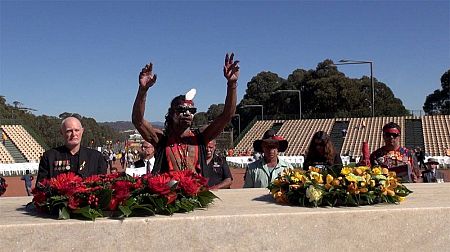 Subsequently, examination of these events show that ideal conditions have been created for 2017 to be the year Australia grows up, stops perpetuating the lies, faces the truth and responds accordingly. The time has long passed since the international community considered Australia a a shining light in human rights — an egalitarian democratic role model in a region teeming with huge human rights abuses.

Instead of being perceived as an ethical role model, much of the world now views Australia as complicit and, at times, a leader in ongoing genocidal policies and practices and environmental destruction.

Here is a short educational documentary on Australia shown to high school students in Norway. It provides an insight into how contemporary Australia is viewed internationally.

Let’s launch into 2017 by reviewing some of the key events from 2016 that are rippling out and rapidly deconstructing the first lie – the colonial myth/story that Australia was discovered and peacefully settled by James Cook – the lie that negates the immense blood stain of 247 years that is 7 generations of bloodshed and genocide of the Original nations of this continent. This is the foundation upon which modern day Australia is built.

1. The truth of the first interaction Britain had with this continent

On the 28 March 2016, at the National Museum of Australia, Canberra – during the final hour of the Encounters exhibition, on loan from the British museum – Rodney Kelly, a direct descendent of Gweagal warrior Cooman spoke out bravely, making a statement of claim on behalf of the Gweagal People for the return of his ancestor’s shield and spears.

Here is the 3 minute original footage taken at the National Museum of Australia Canberra on that day 28 March 2016.

Rodney Kelly has vowed he will continue to fight in 2017 for the return of his grandfather’s shield and the other important cultural artefacts locked away in London’s British Museum.

Mr Kelly researched the journals of Cook, Joseph Banks and Sydney Parkinson, which all tell a similar story of their first contact.

When Captain Cook's marines landed in Botany Bay 246 years ago. “They all tell a story of shots being fired first” Rodney said.

Gweagal warrior Cooman was shot by Captain Cook's marines as they landed in Botany Bay.

“Cook’s crew shot from the boat, they weren’t even on land,” Rodney said.

Cook took the Gweagal warrior’s shield and spears, back to England.

In August 2016 the New South Wales Parliament passed a bipartisan motion acknowledging Gweagal ownership of the artefacts and urging their repatriation.

“When the Shield is returned to Australia, it will be displayed where everyone can visit it, particularly school children, and learn the true history of the invasion of Australia and the Frontier Wars that followed.”

2. The event in 2016 that highlighted the truth of the ongoing genocidal interaction Britain has with this continent

It was noted by Greek dramatist Aeschylus 2,500 years ago that

“In war, truth is the first casualty."

@SomersetBean dear Bean, how are you? Where are you? Here your banner design at the Frontier Wars March last Anzac. pic.twitter.com/wRCTrxRzXA

The Frontier Wars march at the Australian War Memorial on Anzac Day 2016. Over 550 locations of killings that took place across the continent were carried on yellow fabric measuring over 25 metres.

On 30 March, Queensland Premier Annastacia Palaszczuk said it was time to tell the truth:

"For many years, Australian schools and Australian institutions have not told the truth about the way in which Australia was settled."

When asked if she meant that Australia was invaded, Ms Palaszczuk answered: "Yes."

Australia's killing fields, the Frontier Wars, were remembered in 2016 for the sixth time in the annual Frontier Wars Remembrance march to commemorate the people who were slain in the genocidal frontier conflicts that cover this continent.

This undeclared war continues with current genocidal policies that include (but not limited to the following examples):

“... the Federal Government is reluctant to acknowledge the frontier wars even happened."

Mr Lock said the Government needed to acknowledge the truth:

We need for the government to recognise the fact that it was a war, unless they want to call it premeditated murder. 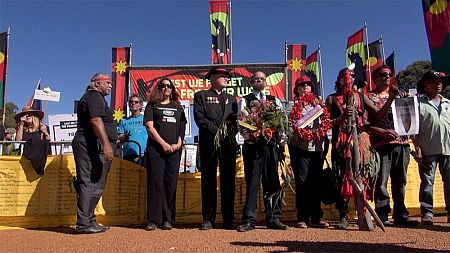 25 April 2016 was the first time delegates and descendants from Original Nations across the Land have been allowed to take part in the ANZAC parade to commemorate those slain in the Frontier Wars. (Image courtesy Sovereign Union) 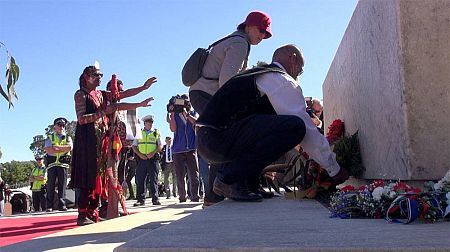 An historic first! A small group of first nation delegates from across the continent were given permission to lay a wreath and participate in a Healing Ceremony for all people massacred in the Frontier Wars.(Image courtesy Sovereign Union)

Each year previous, the procession was blocked by a line of Federal Police who prevented the marchers from laying a wreath at the tomb of the Unknown Soldier at the Australian War Memorial. 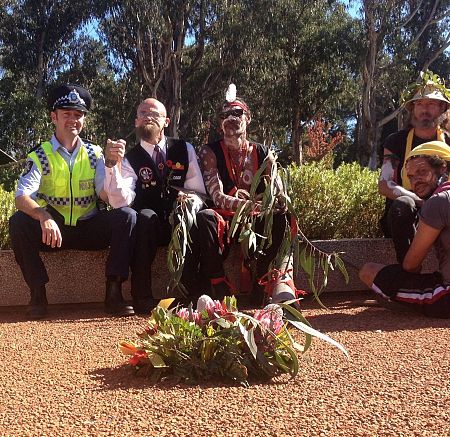 This time the police took a more respectful approach compared to the previous years. 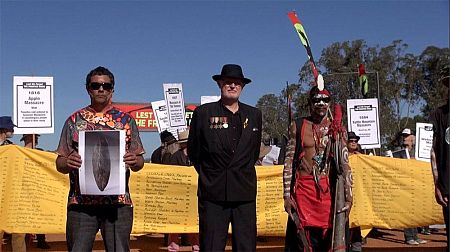 Also in the march, Rodney Kelly carried a photograph (seen above) of his Gweagal ancestor’s shield, which James Cook shot at when he first arrived on 29 April 1770.

Many thanks to Enlightning Productions for the 2016 Frontier Wars Parade and Healing Ceremony (some of the only footage) below taken on ANZAC day Canberra:

Here is the experience of two of the First Nation delegates who were allowed to participate for the first time and lay a wreath at the Stone of Remembrance on behalf of the people slain in their respective nations:

A walk back in Time to bring Us to the Future We Never Left
We were All Here!
In Spirit and Heart
Flesh and Blood
To All of Us Mob

And Paaakantji (Baakindji) custodian Daniel Whyman from Wilcannia NSW had a similar experience of healing that he shares:

I knew the Truth was out there.
We have not gone, we just arrived.
It was good to see other brothers and sisters’ black and white uniting together and acknowledging the “Frontier Wars”.
A job well done for “breaking” through the barriers.

In April 2016, Ngunnawal custodian Uncle Patrick Lock drafted a statement which, in part, offers the Australian Government two options of action resulting from the truth about the Frontier Wars:

1. To Honestly Acknowledge the Factual Truth of the past “Frontier” wars both here and in overseas conflicts.

3. Within three (3) months “Adequately Fund a First Nation gathering Treaty of all Corroborees - that the Traditional Tribal peoples and mob of the Many Rivers of this vast landmass and sea now commonly known as Australia be invited to come together to conciliate first.

“Both for the acceptance of the atrocities committed during the unrelenting ceaseless 228-year war against the first peoples of this continent and as both initiators and accessories to on the ongoing genocidal practices now”.

“And as accessories both before and after the Fact of premediated MURDER of Aboriginal Men Women and Children”.

“We conciliate first amongst the tribes with Treaty of all Corroborees”.

It’s time to Return to Land, People and Governance.

Our way of having Governance is within a Treaty of all Corroborees.

~ Bundjalung Warhlubal Custodian, the Lore/Lawperson of the 13 tribes and 13 sacred rivers that comprise the Bundjalung Nation, 2016

According to the Aboriginal Tent Embassy submission to the Recognise Panel:

'Recognition of Aboriginal Peoples in the constitution must not usurp our continuing Sovereignty. The only resolution of the constitutional issue is by way of negotiated Sovereign Treaties under the supervision of the international community.’

Clearly, 2017 it is the time to set a positive foundation for negotiating treaties with the Original Sovereign Nations of this continent.

The following song was produced by Cat Empire vocalist Felix Riebl in conjunction with the Marliya singers from the Gondwana Indigenous Children’s Choir. The family of Ms Dhu hope that this song written about her death in custody at South Hedland police station, Western 4th August 2014 will draw international attention to their campaign for justice:

Author's note: The title of this piece “Amnesty on Ignorance is Over!” is a quote attributed to Uncle JB (A Birri Gubba Murri man) during a meeting at Nimbin Cultural Centre, early 2016. 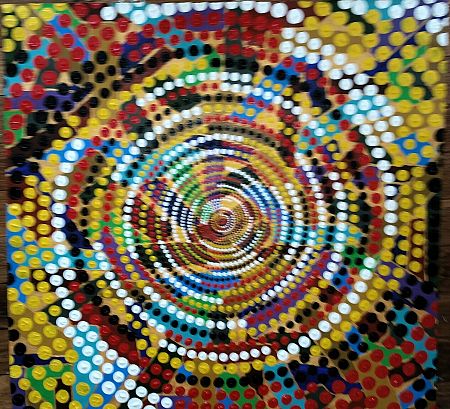 The Hero's Journey: The story of Ben Moghimi

ANZAC Day and the Frontier Wars: 'The amnesty on ignorance is over'

10 March 2013, 10:14am Australia’s Indigenous People are getting politically organised and active, with ...
Join the conversation
comments powered by Disqus
News updates