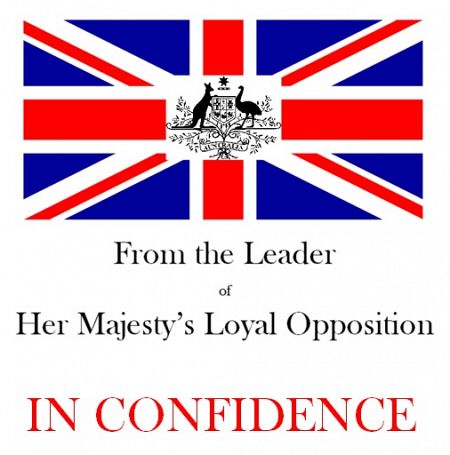 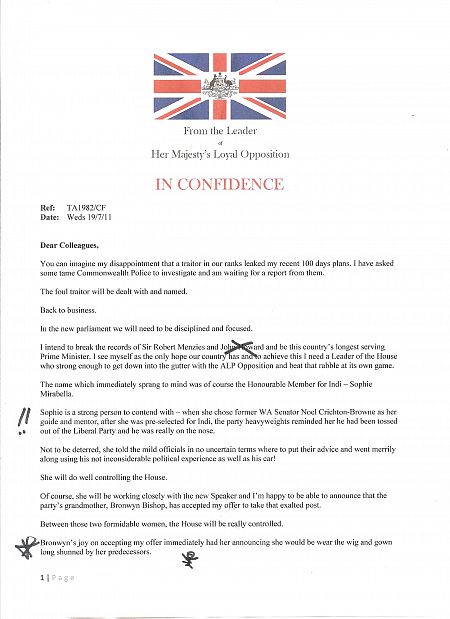 You can imagine my disappointment that a traitor in our ranks leaked my recent 100 days plans. I have asked some tame Commonwealth Police to investigate and am waiting for a report from them.

The foul traitor will be dealt with and named.

In the new parliament we will need to be disciplined and focused.

I intend to break the records of Sir Robert Menzies and John Howard and be this country’s longest serving Prime Minister. I see myself as the only hope our country has and to achieve this I need a Leader of the House who strong enough to get down into the gutter with the ALP Opposition and beat that rabble at its own game.

The name which immediately sprang to mind was, of course, the Honourable Member for Indi – Sophie Mirabella.

Sophie is a strong person to contend with – when she chose former WA Senator Noel Crichton-Browne as her guide and mentor, after she was pre-selected for Indi, the party heavyweights reminded her he had been tossed out of the Liberal Party and he was really on the nose.

Not to be deterred, she told the mild officials in no uncertain terms where to put their advice and went merrily along using his not inconsiderable political experience as well as his car!

She will do well controlling the House.

Of course, she will be working closely with the new Speaker and I’m happy to be able to announce that the party’s grandmother, Bronwyn Bishop, has accepted my offer to take that exalted post. 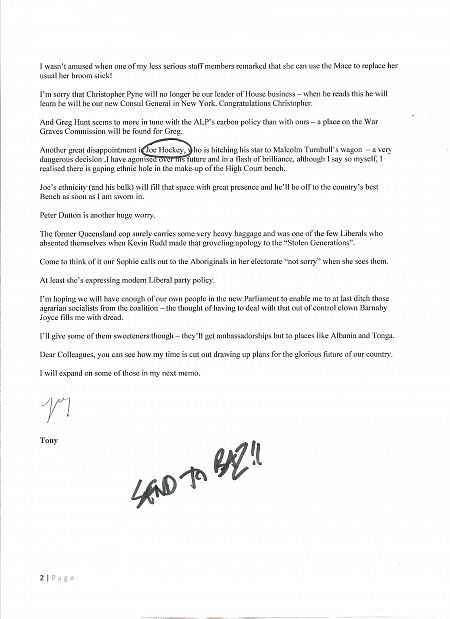 Between those two formidable women, the House will be really controlled.

Bronwyn’s joy on accepting my offer immediately had her announcing she would be wear the wig and gown long shunned by her predecessors.

I wasn’t amused when one of my less serious staff members remarked that she can use the Mace to replace her usual broom stick!

I’m sorry that Christopher Pyne will no longer be our leader of House business – when he reads this he will learn he will be our new Consul General in New York. Congratulations Christopher.

And Greg Hunt seems to more in tune with the ALP’s carbon policy than with ours – a place on the War Graves Commission will be found for Greg.

Another great disappointment is Joe Hockey, who is hitching his star to Malcolm Turnbull’s wagon  – a very dangerous decision. I have agonised over his future and in a flash of brilliance, although I say so myself, I realised there is gaping ethnic hole in the make-up of the High Court bench.

Joe’s ethnicity (and his bulk) will fill that space with great presence and he’ll be off to the country’s best Bench as soon as I am sworn in.

Peter Dutton is another huge worry.

The former Queensland cop surely carries some very heavy baggage and was one of the few Liberals who absented themselves when Kevin Rudd made that groveling apology to the “Stolen Generations”.

Come to think of it our Sophie calls out to the Aboriginals in her electorate “not sorry” when she sees them.

I’m hoping we will have enough of our own people in the new Parliament to enable me to at last ditch those agrarian socialists from the coalition – the thought of having to deal with that out of control clown Barnaby Joyce fills me with dread.

I’ll give some of them sweeteners though – they’ll get ambassadorships but to places like Albania and Tonga.

Dear Colleagues, you can see how my time is cut out drawing up plans for the glorious future of our country.

I will expand on some of those in my next memo.