Lachlan Barker reviews the last week of sporting action, which has seen Australia do well in a wide swathe of sports. And go Kyrgios and go the Socceroos tonight! 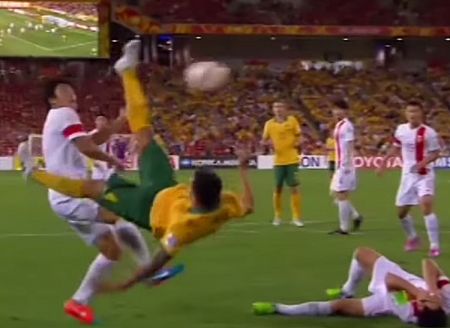 That goal by Tim Cahill against China last week, which arguably cemented his place as the Socceroos best ever player (Image via YouTube)

SPORT THIS PAST WEEK has followed the script, with Australia doing well across a range of sports.

In the soccer, Australia made it through to the semi-finals of the Asian Cup, defeating China PR 2-0 in the quarter finals.

Australia’s goals were both scored by Tim Cahill, one an overhead kick that was truly a sight to behold.

It was competent victory by Australia, and everything coach Ange Postecoglou could have wanted, particularly winning in regulation time, thus sparing his players the extra fatigue that comes from a tied match going to extra time.

However, it was on the other side of the knockout draw that the big surprise of the tournament occurred. The United Arab Emirates (UAE) defeated holders and favourites Japan.

Scores were tied at 1-1 after ninety minutes and then there then followed a scoreless period of extra time. So, the two teams then went to the lottery of a penalty shootout, which the UAE won 5-4, with Omar Abdulrahman slotting the kick that buried Japan and sent the Gulf state through to a semi-final against Australia.

While Australia probably breathed a sigh of relief to know they would not now be facing Japan, one hopes they are professional enough to know that no one makes a semi final in any tournament by accident and so the UAE will be no easy beats.

The semi final is tonight, Tuesday night, 27 January, with the broadcast live on the ABC from 9pm AEST — blissfully free of ads.

The other semi-final saw Korea Republic (formerly South Korea) defeat Iraq 2-0 and so go through to the final, where – hopefully – Australia will be their eventual opponents.

And speaking of ads, I would like to have a real go at Channel Nine for their "coverage" of the Tour Down Under.

The bike race finished on Sunday, but it was not an enjoyable experience. I saw bits and pieces during the week but, on Saturday, 24 January, I was in a position to watch for the bulk of the day’s racing.

I came into the broadcast about an hour in and, after a few minutes we went to an ad break, I hit the mute button and then waited for the broadcast to begin again. It duly did, but then, to my consternation, after seemingly only a few pedals had been turned in anger, we went to another ad break.

At first, I thought I was imagining things – maybe there was some broadcast quirk that meant we had to have a couple of ad breaks close to each other – but then it happened again.

Right, I said, so I got out my stopwatch, opened a spreadsheet and began timing; the results are displayed on the following graphic: 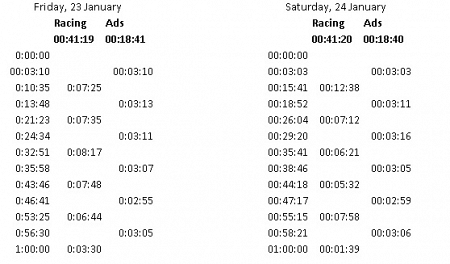 Now, the FreeTV Code of Practice states clearly that commercial networks are allowed a maximum of 16 minutes of ads an hour. Channel Nine during the Tour Down Under repeatedly breached this, with closer to 19 minutes of ads per hour.

As a comparison, when SBS cover the Tour de France, they follow the law and have 16 minutes of ads an hour. These came in four, four-minute blocks, with 11 minutes racing in between. I can say that because I timed them as well when it was on.

These eleven minutes of racing allowed you to fully engage with the race, to see little moves, other tactics and team work being played out.

With Nine’s coverage of the Tour Down Under, every time you began to get in sync with the race, an ad break came on, leaving us spectators fuming.

And, needless to say, none of the Women’s Tour was live on TV.

In the Mountains classification, Loren Rowney took the polka-dotted jersey out, with Scandolara second and Hoskins third.

This was Cadel’s swansong – his last ever Union Cycliste Internationale (UCI) tour event – and it was good to see him go out on the podium. Evans had worked hard all week for Dennis and so it was a fitting tribute to a great career to see him in the spoils.

In the mountains, it was again an all Australian affair, with Jack Bobridge of UniSA-Australia (University of South Australia) taking the title, with Dennis second and Porte third.

In the sprints, some other nations finally stepped up onto the podium, with South Africa’s Daryl Impey of Orica GreenEDGE first, then Italian rider Niccolo Bonifazio of Lampre-Merida second and Evans third.

While it was good to see the Australian country side flashing by in the background, with the occasional shot of a kangaroo hopping through the vineyards of the Barossa, overall it was a shameful treatment by Channel Nine of Evans’s last race.

Channel Nine’s attitude seems to be that sports are only there for the network to make money out of, but they would do well to remember that if you annoy viewers like this long term, soon they will have few viewers and, by extension, little money. 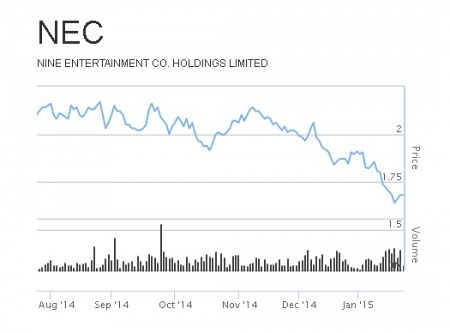 The market seems to suggest Nine's popularity is declining

One bit of action that is worth a peek though, is the unholy pile up at the end of Stage four; this vision comes from a camera on the bike of Equipe-FDJ’s Jeremy Roy:

In the cricket, the one day tri-series, between Australia, India and England is approaching the end, with Australia and England in the top two positions on the table. India were hoping for a victory on Australia Day over Australia to leapfrog England into second place, but the match was a damp squib, rained out without a result. However, both teams gained two points from the washout, and thus India have one more chance this Friday, against England in Perth. If they win, they go through and if they lose they’re out — bonus points are now not a factor.

Finally to the tennis. The Australian Open is underway and, sadly, Australia’s women have all exited the singles event. Casey Dellacqua, Sam Stosur, Jarmila Gadjosova and Ajla Tomljanovic all bowed out in round two.

In the men’s draw, things are going better, with two players, Bernard Tomic and Nick Kyrgios making reasonable headway. Tomic however bowed out in the fourth round to Tomas Berdych, while Kyrgios defeated Andreas Seppi, in five sets, to go through to the quarter finals, where he will play British champion Andy Murray.

So best of luck to Kyrgios and the Socceroos, and well done to Cadel Evans, Tour de France winner, and a genuine leader for Australian cycling.