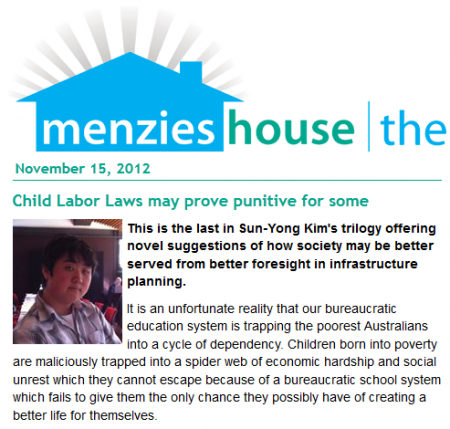 Menzies House, the website set up by Cory Bernardi, of bestiality fame, to promote “conservative, centre-right and libertarian” causes, has shown that it’s not very “centre-right” at all. In fact, a recent post on the site suggests its way over there on the ultra-hard-right end of the spectrum.

The article in question, entitled “Child Labour Laws May Prove Punitive For Some”, written by an individual described as “a member of the Young Liberal Movement studying law at Macquarie University”, states that repealing the child labour laws would benefit children from poorer socio-economic backgrounds.

In the fourth paragraph, the author states, remarkably:


If a poor child were able to work from the age of 8 to 16 years old, they would accumulate enough money to take a family out of poverty. But not only does working solve the financial problems of poor children, it engenders a work ethic that has the potential to transform them into productive members of the workforce who contribute to society as opposed to the social outcasts they would have been had they remained at school.

Being a Tory, he undoubtedly would want these waifs to be paid minimum wage. The minimum wage for someone aged between 8 and 16 years of age is $5.87 an hour. Over a 38 hour week, this equates to $223.06 a week or $11,599.12 per year. Thanks to the Government raising the tax free threshold to $18,200 p.a., this amount would be tax free. However if a  Coalition government is installed, as per Menzies House’s wish, the tax free threshold would drop back down to $6,000 p.a., which means the child would have to have P.A.Y.G. (pay as you go) instalments deducted from their wage of 15c in every dollar over $6.000. This equates to an amount of $16.15 being deducted from their pay. Thus they would take home $206.91 a week, or $10,759.27 a year. How this paltry amount is supposed to lift anyone from poverty is unclear. Even with the increased tax free threshold, no-one is going to live high off the hog on less than twelve grand a year.

Lets’ go back to the beginning of the article though, which actually starts out like it is in support of the Gonski reforms:


It is an unfortunate reality that our bureaucratic education system is trapping the poorest Australians into a cycle of dependency. Children born into poverty are maliciously trapped into a spider web of economic hardship and social unrest which they cannot escape because of a bureaucratic school system which fails to give them the only chance they possibly have of creating a better life for themselves.

As they have no prospects for work in an increasingly white-collar workforce, these young Australians are forced onto the welfare rolls from which they never leave, establishing a cycle of dependency that is both economically and morally irresponsible. For far too long we have neglected these Australians by saying that their futures are nothing better than a food stamp voucher. But as an egalitarian society fiercely loyal to the ideals of economic opportunity for all, all of us know that we can and must do better for these folks. They have futures, even though they don’t believe it.

In a country with a high level of economic mobility, even the poorest among us can strive for brilliant things, but unfortunately that can’t happen if one is trapped in failing schools that only entrench poverty. Whilst the need for a world-class education is paramount…

All well and good so far, however the concluding section of the third paragraph heads off in another direction entirely:


… one should also understand that education is not for everyone. For children who are trapped in schools that entrench poverty and add no educational value, they would clearly be better served by working from a young age and earning money that might help them reach a better tomorrow.

Ah, now we’re getting to the crux of the article. We’ve already covered the first bit of the fourth paragraph, so let’s have a look at how that one finishes up.


What’s more, the nurturing of the work ethic among the young poor can help nurture the leadership qualities in them necessary to be the entrepreneurs of the future which is so vital in today’s innovation economy.


Jim Clifton at Gallup has pointed out that the key character trait among successful entrepreneurs is not imagination or intelligence but determination to succeed. He estimates that in any given community about 10% of the people have the drive and determination to be successful. The tragedy is that whilst there are incredibly creative people who work in an entrepreneurial way in poor communities they mainly work outside the law. They make money at drugs, gambling, prostitution or a variety of other profitable but illegal functions. They represent talent we need in legal society in the workplace. By exposing poor kids to real life experiences of hard work is a positive attribution; we can build an army of young entrepreneurs that will help us compete in the global knowledge economy.

Here we have all the Tory characterisations of the poor in a nutshell. “They make money from drugs, prostitution and a variety of illegal activities” apparently. If only they’d devote that energy to working in a Tory sweatshop, instead they could go on to be the next Bill Gates. What utter bollocks.


Whilst work is clearly the answer to the poverty issue, the biggest obstacle remains the legal framework concerning child labor. The current Child Labor Laws are simply an out of date concept that, whilst having some contextual relevance in the past, does not do much good other than to trap the poor into a cycle of poverty. For that reason there is a strong case for abolishing the child labor laws and letting kids work to set themselves free.

Working for poverty levels of income apparently enables kiddies to break free of the poverty cycle, exactly the same way it has done for thousands of them in third world countries. Once again, utter bollocks. Also note the passage in bold lettering. We’ll return to that later.


In considering the case against Child Labor Laws, it should be noted that Child Labor Laws were created at a time when labor-intensive industries dominated the economy where the lack of worker protections in those days made child exploitation a serious problem. However in today’s changing world defined by a capital intensive where cheap labor is often outsourced to the third world, there is not the demand for child labor that there used to be in a labor intensive economy. Whilst the problem of child labor has gone away, the child labor laws still exist in full force as if it were still 1900. Any good that came from the child labor laws has long been exhausted, so ending the child labor laws is not only the economically rational thing to do, it is also the moral thing to do.

“It is also the moral thing to do”. FFS, has this clown never read Oliver Twist?


But helping poor kids to work means much more than simply ending child labor. We need to create a whole new cultural attitude towards the today’s’ youth that engenders a work ethic that make all of what I have described above possible. This can only happen through a series of policy mechanisms that make moving poor kids out of failing kids into the workforce economically rational.

One idea is to declare poor community areas opportunity/free trade zones that would waive all taxes and regulations on any businesses that decided to move into these communities. By making poor communities the centre of new commerce and business we can send the message to the economically and socially disadvantaged that Australia has not given up on you which is crucial to changing the inferiority complex of much of those in poverty. A rather interesting proposal that has recently been in discussion in this regard is the idea of providing a government subsidy for employers that employ poor children to ease any financial pressure on businesses doing the right thing.

The first half of the last paragraph seems to be advocating the conversion of poor suburbs into sweatshop zones. Great idea that one, mate.

This was written by someone who wouldn’t have done better than “more effort required” in my English class at school.

Anyway, this polished intellectual concludes with:


Whilst these ideas may sound radical at first, the only radical notion on offer is the idea that we continue to let our poor spiral into a cycle of never ending poverty. It is a moral and economic catastrophe that needs to stop now. Its time for a serious discussion on poverty and that should start with the child labor laws.

No, bonehead, a discussion on poverty has to start and end with the growing inequality of the different socio-economic groups, and how we can best implement the recommendations of the Gonski Report to provide all Australian kids with a better education ― and not just the well off.

Now, back to the “work to set themselves free” comment.

Interestingly, the actual URL of the article is: http://www.menzieshouse.com.au/2012/11/-repealing-the-child-labor-laws-work-will-set-you-free.html.

Hmmm. Work will set you free. Where have we heard that before? Isn’t that the English translation for the German phrase “Arbecht Macht Frei”? It is indeed, and that exact phrase was located above this gateway:


How could anyone could be so stupid as to use this phrase – and especially in an article advocating the abolition of child labour laws – is well and truly beyond me, though it does give an interesting insight into the mindset of both the Young Liberals and Menzies House.

I, and many others, have added comment after this article, and I encourage more to do likewise ― to let these bozos know how seriously out of touch with reality they are. Add your comment here: Child Labour laws may prove punitive for some.