John Wren takes a walk on the campaign trail, uncovering scandals, misinformation and a PHONy or two.

WE ARE NOW three weeks into the Federal Election campaign and things are hotting up. The #Watergate scandal was only just breaking last week but it has since hit the mainstream (MSM) media. As has now become the norm, social media broke the story and the MSM has been playing catch-up.

The Liberals have handled it very poorly. At first, dismissing reports as mere “conspiracy theories” and then when that didn’t work, attempting to play it as “nothing to see here". They then tried to claim everything was above board and completely transparent by releasing redacted documents. As one wag put it, it would have been more transparent had they used transparent ink to redact the documents. This, of course, means they must be hiding something which only makes them seem more guilty. Indeed, if they had nothing to hide, a full release of all documents would have cleared them and the media (both legacy and social) would have moved on.

Spot on from @davrosz — Bundy and #Watergate https://t.co/LhA6XJofUu @IndependentAus

But wait there’s more… Under immense pressure to comment, Barnaby Joyce, the former water minister who signed off on the scandal, decided to go on the ABC with Patricia Karvelas to clear his name. He was even more bombastic and incoherent than normal, leading many to surmise that he may have imbibed a few “soda waters” before going on air. He also threw his colleague Angus Taylor under the bus in the interview. Taylor has since gone into witness protection. Joyce has effectively kept the story in the media now for at least another week — possibly right through to the election. It is just the sort of distraction that Morrison doesn’t need.

Over Easter, there was a supposed campaign truce between Morrison and Shorten. However, Morrison for some reason invited journalists into his Pentecostal Church to see him at worship. Now there is nothing new in the media covering our political leaders at worship but Morrison’s overtly happy-clappy dancing and singing Pentecostal service is unusual. Australians are not particularly outwardly churchy people. In fact, organised religion has been in steady decline for decades (as it is in most Western countries). What is most peculiar about this episode is that Morrison and/or his media advisors must have thought it was a good thing to have him pictured this way. It was a spectacular own goal. It demonstrates how out of touch with mainstream Australia they really are. Many observers find the hysterical Pentecostal devotion weird, at best.

Morrison then followed this up with a rear-guard action with plenty of photos of him playing sport — tennis, soccer, cricket all got a look in. He was clearly trying to reset his image as a knockabout Aussie bloke who just loves his sport and a few cold bevvies.

Morrison also tried to reset the narrative away from the unfolding Watergate scandal by ramping-up a ridiculous scare campaign that Labor plans to implement death duties and an inheritance tax. This was decidedly underhand, even by Coalition standards. They even used fake photoshopped tweets ostensibly from ACTU President Sally McManus. This was then distributed across social media, even by those who should know better, such as Sky News commentator (and former Liberal politician) Gary Hardgrave. Hardgrave was forced to retract his tweet and apologise to McManus (he has since deleted the apology from his timeline). 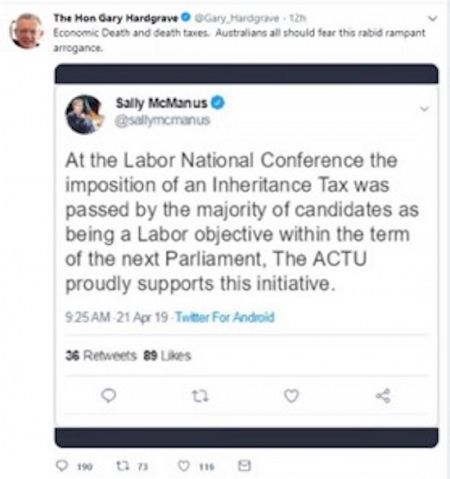 The scare campaign appears to have emanated from Treasurer Josh Frydenberg’s office and prompted a public denial from Shorten and the Labor Party that the plan for these “taxes” did not exist and would not be a part of Labor policy. Interestingly, Morrison and the Liberals have refused to do the same. They themselves have not ruled out death and inheritance taxes.

While all this was going on, Shorten and his team were had their feet on the ground, talking and listening to voters, holding open town-hall meetings, getting their message across. Former Labor Senator Sam Dastyari has written an excellent article on the campaign.

I have spent some time door knocking in the campaign and can confirm Labor has a full suite of very well accepted policies. There is much to discuss and when a householder asks a question, we are able to provide a meaningful answer from a host of policies that actually have a meaningful effect on their lives. The Liberals, by comparison, appear to be repeating the same policies.

The Liberal & National Party now seems to be re-announcing their policies. Anyone like to take a punt on what old policy they will announce next? Here's their policy list as a guide #auspol #ausvotes19 > https://t.co/GLgxmrSqkA

Consumer confidence figures were released today (24 April). They showed a welcome jump, despite falling house prices. As economist Stephen Koukoulas wrote, when these are compared to the betting markets for the Federal Election, people are clearly factoring in a Labor win in May and are feeling more confident about the economy going forward. Imagine the crash in confidence, though, if the Libs somehow manage a win. That doesn’t bear thinking about.

And finally, a word on Pauline Hanson. Her numbers are down in PHON's Queensland heartland, largely due to last month’s "guns for votes" scandal. As she is well known to do, Hanson got herself back on the front pages by saying something stupid (actually, more stupid than normal). She denied climate change was man-made (nothing new in that for her), stated that climate change has always happened and that that’s what killed the dinosaurs. I find it astonishing that her family lets her out in public unsupervised. It must be like having a fully-grown toddler in your house. For the record, Pauline, the dinosaurs were killed by a massive meteorite strike in what is now known as the Gulf of Mexico. It caused a sudden and prolonged cooling of the planet, that killed off the vast bulk of the cold-blooded reptiles. It was an extinction-level event and definitely not cyclical climate change. I continue to be at a loss as to why outwardly sensible people vote for Hanson and her band of merry idiots.

There will be no Wren’s Week next week as I will be away. But back the week after. Keep up the fight, comrades!

“What happened to the dinosaurs, how did they die? Humans didn’t create it.” Pauline Hanson has put her support behind the controversial Adani coal mine ahead of protests this week, denying the effects of climate change. #9Today pic.twitter.com/PZMBjcE3xy

Regarding the $80million #watergate payment. Let’s not pussyfoot around this. They know where the money went - THEY ARE JUST NOT GOING TO TELL YOU.#watergate just one of the many reasons Bill Shorten’s campaign is hitting it out of the park. https://t.co/u9XLPmzsw7