This week, John Wren discusses the Liberal victory in NSW, One Nation's ties with the NRA and his ludicrous ban from Twitter.

A challenging but remarkable and inspiring week this one.

We had the NSW State Election, of course, with no great surprises. The pre-polls all suggested a Coalition win albeit with a reduced majority, which is exactly what the poor people of NSW delivered for themselves. The Libs and their pundits all crowed about the “resounding win”, one of the networks posted that Berejiklian had “soared to victory”. All very far from the truth, of course. The reality is that the Liberal vote in NSW went backwards by 3.0 per cent. The Nationals were caught napping by the Shooters, Fishers and Farmers Party, who picked up another couple of seats. Labor also picked up a couple of seats but not enough to change the Government. Supposedly, the Federal Liberals were invigorated. But only the most hardcore of the hardcore Libs would really believe it. Voters do know the difference between State and Federal issues.

NSW Labor’s cause wasn’t helped by their leader, Michael Daley, being exposed making anti-Chinese comments in the last week of the election, either. The comments themselves were made many months ago. The Libs cunningly held onto them to use them to maximum effect by releasing them last week. It worked. Make no mistake, Daley gave the Coalition the ammunition, the Libs then chose when to pull the trigger. Most parties would do similar if given the chance. It’s a foretaste of the tactics that will be used in the May Federal Election. It’s going to get nasty, probably the nastiest we’ve seen in years.

Michael Daley tendered his resignation after Bill Shorten expressed concerns over him staying on and the effect it might have on the federal campaign. #auspol #election2019 https://t.co/cw812KKxjl

Federal Liberal Party VP Teena McQueen was exposed as a full-blown hard rightwing nutter on Q&A. It just went from bad to worse for her. Her appointment was backed by Tony Abbott and Michael Sukkar, amongst others. It makes you wonder what these two could have seen in her. How poor is their judgement? Or, worse still, how much worse must other contenders have been if she was the one to get the guernsey?

Speaking of hard right nutters, One Nation have been exposed by a three-year Al Jazeera sting. James Ashby and Steve Dickson were exposed meeting with NRA figures in the USA asking for large donations — $20m with promises to relax Australia’s gun laws when they win the balance of power in Parliament. Treasonous stuff. In some of the same footage, Pauline Hanson was recorded claiming that the Port Arthur massacre was a “false flag” conspiracy to change Australia’s gun laws. Terrible stuff. I lost a friend that day (Jason Winter, a NZ-born winemaker). It sickens me that someone would even think such nonsense. 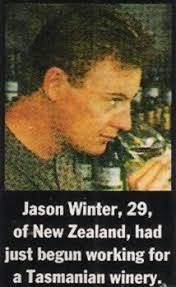 One Nation immediately went into PR attack mode, trying to discredit Al Jazeera, first by claiming it was Muslims getting back at them (presumably, this is an admission that they have been Islamophobic in the past). This was simultaneously a dog-whistle to One Nation’s racist support base. Then they tried to discredit them on the basis of journalistic ethics. The reality is that these two idiots were sucked in and were quite prepared to sell out Australia’s strong gun laws for lots of cash.

Shorten immediately stated that One Nation would be put last on all of Labor’s how-to-vote cards and demanded the Libs do the same. Morrison waivered for days on this. In Queensland in particular, the Coalition really needs One Nation preferences to hold many of its seats. Once again, the Libs have wedged themselves. As I write this on Thursday afternoon, Morrison has announced that, in Victoria, One Nation will be preferenced after Labor in all seats. He still has not committed to Queensland. Victorians are going to punish the Liberals in May. It will be a re-run of the State Election. There was even news today that Tim Wilson’s supposedly safe Goldstein seat is now in play. Its going to get ugly, very ugly. Bring it on!

We still haven’t heard from the Nationals, yet, as to where they will put One Nation on their preferences. They are in deep trouble, losing support to Shooters, Fishers and Farmers Party, One Nation and Independent candidates. I guess that’s what happens when you become little more than a coal lobby front and forget about governing for your electors. The Nationals have a deep existential question to answer — what is more important, donors or voters? Time will tell.

And, finally, the big news. On Tuesday night, I suddenly and without warning found that my @JohnWren1950 Twitter account had been suspended. I could still log in and follow conversations but could not post anything. All very odd. I sent a message to Twitter Support and waited for response. The next day, a message came back saying the account was permanently suspended for impersonation. See below. 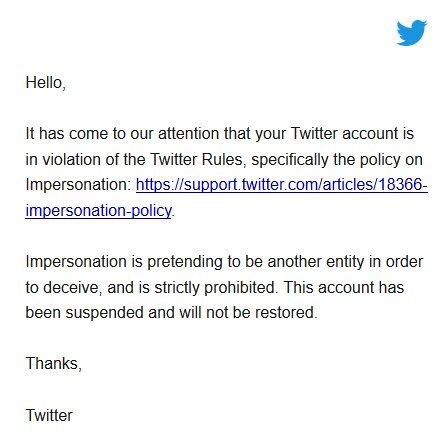 Now I thought to myself, this is really odd given that Twitter’s own definition of impersonation is as follows: 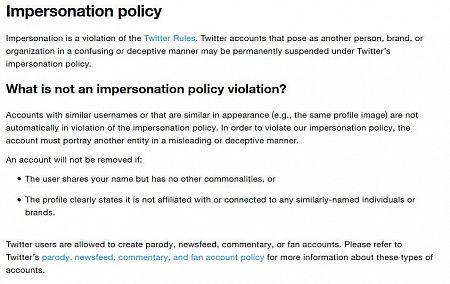 Now, given that my namesake John Wren died in 1953, I was clearly not pretending to be him and not being deceptive. I did not match Twitter’s own definition of impersonation. I was, at best, a parody account. Which is allowed.

This was even more curious, given that in March 2018, I submitted a complaint to Twitter about someone impersonating the @JohnWren1950 account to discredit me. Some readers may even remember the @JohnWren195O account (with a final O, not a zero). Twitter upheld the complaint (case number 78326565) and suspended the impersonator. So, obviously at that point in time, Twitter recognised me as the “original” John Wren account.

Clearly Twitter made a mistake. I submitted the facts to them, but they have not responded.

The suspension is so absurd, that many people have suggested there may be more at play. I know my tweets get under the skin of many in the Coalition. They have tried to shut me down before. The day before the suspension, I had been sent images of a number of documents allegedly from the Department of PM and Cabinet and others ostensibly from the Liberal Party. I receive all sorts of documents and photos from contributors all over Australia, some are quite salacious of Government MPs, others are just leaked documents. I treat most with scepticism. I pass them onto the ALP or the ACTU if they warrant it. Some, like the salacious info mentioned above, I file away securely. Depending on the subjects, I’ll save them for a rainy day. As I’ve mentioned before, every Australian these days carries a camera. Everyone is a journo. If an MP is “playing away”, someone will snap them at it eventually.

Although all progressives such as myself and Little Richard were elated when John Wren rose from the ashes as @powerglory5, as he was breaching Twitter ToS by evading a permanent ban, he was suspended again. Literally crying rn.

Anyway, I digress. On Monday, I posted a couple of the alleged PM&C docs to the PMC Twitter account asking them if they were legitimate. Their response was negative, but terse. The Government has the power to command social media companies to remove offending accounts. I cannot prove it, of course, but the timing is suspicious. Did the PM’s office tell Twitter to remove me? And is the clearly absurd “impersonation” charge their excuse for doing so? If it is the case, it is an abuse of executive power. It would be clear censorship of dissenting political views. We may never know the truth.

This should also be a warning to other Twitter users. There are many of you out there named after famous people from history; Gough Whitlam, Watkin Tench, Paul Keating, Captain Cook and so on. It now seems you can be removed from Twitter for “impersonating” them. Go figure.

I resurrected myself under the account @PowerGlory5 and within a day recovered over 3,500 of my followers, for which I remain eternally grateful for the support I received. Unfortunately, the hard-Left Greens and Socialist Alliance trolls that rejoiced at my original demise reported me to Twitter as it’s a violation of their rules to circumvent a suspension. I have been suspended again, because of them this time.

This is the hypocrisy of the hard Left. While we have a deplorable rightwing Government and real Nazis on our streets and in our Parliament, these nuts go after those on the same side of politics rather than the real enemy, simply because I’m not as far left as them.

John Wren will hopefully be back on Twitter soon. Stay tuned.

RIP John Wren, nuked off twitter after exposing yet another ~secret~ that blew up in his face. Truly the Wile E Coyote of Australian politics pic.twitter.com/3PHV7eYPww