Our political leaders are shifting lockdown opinions for the public eye, while Sky News has been penalised for spreading COVID-19 misinformation, writes John Wren.

IT’S BEEN a big fortnight. The Sydney lockdown continues to dominate the headlines and will continue to do so while its COVID-19 outbreak continues unabated. There were record cases on Friday — 291 and 22 deaths to date. Unfortunately, with a repository of the virus now so large, it is inevitably leaking out and into other states.

South-east Queensland, including Brisbane, the Gold and Sunshine Coasts are now in lockdown and Victoria went into its sixth lockdown on Friday after some unrelated cases sprang out of a large Islamic school in Melbourne’s western suburbs.

These lockdowns are unquestionably the result of the NSW Liberal State Government’s reluctance to lockdown early enough. They left it too late and the virus spread to almost unmanageable proportions. It has been a gross failure of public policy and NSW Premier Gladys Berejiklian should be rightly condemned.

Even now, her approach has been haphazard, with some local government areas (LGAs) having fewer restrictions than others. We are now seeing the virus spread to areas of NSW outside of Sydney. Newcastle, for example, is now in lockdown as well.

Berejiklian changed tack over the week with a massive vaccine drive. This was basically an admission that her lockdown hasn’t worked. 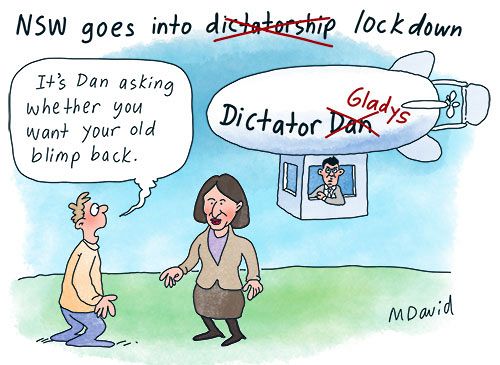 Interestingly, Berejiklian’s federal colleagues Prime Minister Scott Morrison and Treasurer Josh Frydenberg have also pivoted. They were vehemently anti-lockdown while Victoria went through its long 2020 lockdown and very pro the “measured approach” of Berejiklian’s Liberal “gold standard” response. All of a sudden, both are pro-lockdown and supportive.

The hypocrisy of the two has been noticed by everyone. In Morrison’s case, it’s a diversion from his vaccine rollout debacle, which is rightfully hurting him in the polls. One could even argue that if Morrison hadn’t botched it so badly, we may not have needed the Sydney lockdown at all.

In Frydenberg’s case he has been persona non grata in his home state since his notorious “walking on the graves of Victoria’s COVID dead” speech in Federal Parliament last year. He has been widely seen as turning his back on his home state. I have it on good authority that internal polling in his once safe blue-ribbon seat of Kooyong is appalling.

Frydenberg pivoted because he is now very vulnerable to being knocked off by a high profile conservative independent (as Zali Steggall did to Tony Abbott). His political career is facing an existential threat of his own making.

Ultimately though, Gladys Berejiklian’s NSW failure has vindicated Victorian Premier Dan Andrews. Even the Murdoch media is struggling to justify their ongoing attacks on him.

While on the topic of Murdoch, this week, YouTube did the unthinkable and blocked Sky News Australia from posting content to its network for a week. This was in response to repeated breaches of its policy on pandemic misinformation, largely that voiced by Alan Jones, who also lost his regular column in Murdoch print media.

Naturally, Sky News went apoplectic, accusing YouTube of attacks on free speech, free thinking (whatever that is) and other unspecified thought crimes. It must be remembered that although Sky News Australia has tiny viewing figures on its broadcast network, it has a huge following online, not just in Australia but also in the USA where it is watched by much of the same trailer-trash demographic that its sister channel Fox News appeals to. Being cut off by YouTube has a direct impact on the network and its income.

However, what needs to be highlighted is that YouTube, a huge foreign corporation, has more moral fibre and more of a willingness to take action than Australia’s own media watchdog, the Australian Press Council, does. Much of Sky News’ content should have been pulled years ago, but the APC is a toothless tiger. The problem lies in that it is an industry body that is self-funded by its members, which include Murdoch’s News Corp. It is hardly likely to recommend significant sanctions and risk its own funding.

Australia needs a truly independent media watchdog, with legislated truth in media laws to enforce, similar to those that exist in Canada. That YouTube has more power is damning on the current body.

The other big news this week was the announcement by NSW Police that they have charged Hillsong’s Brian Houston with concealing the paedophile activity of his father, the founder of Hillsong. He is due to face court in October, however, NSW Police apparently gave him permission to travel to the USA, where Hillsong has been expanding rapidly.

This raises many questions. There is a “Hillsong clause” in the Federal Government’s travel restrictions exemption list. Morrison quietly had clerical and theological employees classed as “essential”, meaning Houston would not have had to apply for an exit visa. How theological people are essential at the best of times is a whole question in itself, but it demonstrates Morrison’s flawed approach to his secular position.

How many others facing court for similar offences would be allowed to leave the country? What assurance of Houston’s return was given to NSW and Federal Police? If and when Houston does return, will he use a hotel quarantine spot that should have been used by a stranded Australian desperate to return? Why does Houston get this priority treatment?

Morrison is a long-time friend of Houston, even mentioning him specifically in his maiden speech in parliament calling him a mentor. Was it Houston’s mentorship that led Morrison to similarly allegedly conceal the sex offences against Brittany Higgins? And if Houston can be charged for concealing a sex offence, why hasn’t Morrison been similarly charged?

But I think most of us know the reason for this. Is it time for a Federal ICAC yet?