The escalation of COVID-19 cases in Victoria has been made worse by the attitudes of conservative politicians and media, writes John Wren.

SINCE MY LAST COLUMN a fortnight ago, Victoria’s COVID-19 crisis has escalated. A few days ago, we moved into stage 4 lockdown. How did we get to this?

Victoria, indeed the whole of Australia, was doing very well during the first nationwide lockdown. We did not eliminate the virus but we reduced the numbers down to what we thought at the time was a manageable level. The efforts were led by the state premiers via Prime Minister Scott Morrison’s National Cabinet.

From the start of the first lockdown, there were calls from industry, small business groups, Right-wing think tanks such as the IPA and, of course, many Liberal Party MPs to end the lockdown as soon as possible. The pressure on all state premiers was immense. Morrison was part of it — we recall him demanding schools re-open early. He even got his Education Minister Dan Tehan to attempt to bribe private schools to re-open early.

Hindsight is a wonderful thing but clearly, that pressure was too much and the states, including Victoria, opened too soon. Had we remained locked down at Level 3 for an additional 2-3 weeks we could have eliminated the virus as NZ has done. 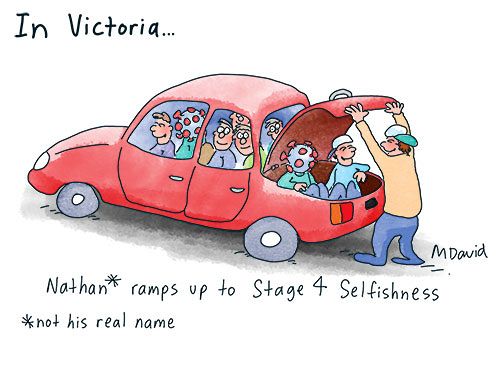 It’s time we called out Karen, Jim et al for what they are: dangerously irresponsible individuals, flouting the law in a way that literally threatens our health and safety.

Then the Ruby Princess debacle happened. There is little doubt in most people’s minds that Home Affairs Minister Peter Dutton dropped the ball on this episode. He was doing his utmost to avoid scrutiny on it this week, forbidding his Border Force officers from being questioned at the inquiry. He even stated that he was not going to allow his officers to be “besmirched” in an inquiry. Apparently, being held accountable is akin to being besmirched. If Dutton is so sure his officers would be besmirched by such an inquiry, he is basically admitting their guilt as inquiries can also clear people.

With the NSW hospitals filling up with Ruby Princess COVID-19 cases, many incoming flights were diverted to Melbourne, putting immediate pressure on quarantine hotel resources. Accredited registered security firms that already had supply tenders in place with the Federal Government were hastily requested to provide staff for the hotels.

These security firms had strict performance standards in their contracts, however, in their haste to supply staff they seem to have sourced untrained casual personnel who were then thrown into the fray with little infection control training or personal protective equipment (PPE).

The inevitable seems to have happened with these poorly-trained guards breaching the performance standards of their employers’ contracts. The guards became infected and took the virus back out into the Melbourne community where asymptomatic super spreaders did the rest.

The casual employment of security guards is key here. Casualised workforces have been the cornerstone of the bulk of infections in Victoria. The biggest initial clusters were all in workplaces with large casual workforces — abattoirs, distribution centres and private (federally overseen) aged-care facilities.

Casual employees have no sick pay and often work shifts across different workplaces (spreading the virus further). Without sick pay, there is a strong financial incentive to ignore COVID-19 symptoms and work a shift. If they don’t work, they don’t get paid. Who amongst us has not gone to work when suffering from a cold?

Luck also plays a strong part in this. Despite the commentary in the legacy media, every state used private security firms in their quarantine hotels. The leaks in Melbourne could easily have happened anywhere. 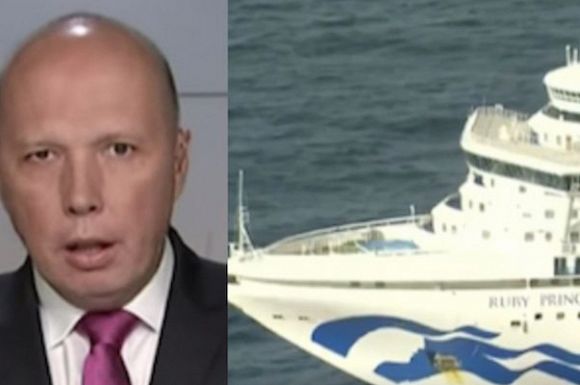 As mentioned earlier, underlying these events from day one was the constant pressure for the conservative side of politics and their media surrogates to re-open the economy. That pressure meant we re-opened too early. Much of the commentary also downplayed the seriousness of the virus, saying it only really affects the aged or it’s no worse than the flu.

This rhetoric encourages complacency. Complacency means that social distancing restrictions are ignored, frequent hand washing is not done and bans on get-togethers with others are ignored. With the virus already in the community, complacency spread it further.

It is not inconceivable that the casual security guards employed in the quarantine hotel were complacent because of the anti-lockdown messaging they heard. Perhaps without that rhetoric ringing in their ears, they would not have been so complacent with their infection control.

Let’s explore this further. When nations face disasters or other existential threats such as bushfires, terrorist attacks or war, generally politics is put aside and the population strives together to overcome the event. There are many examples — NZ's Christchurch earthquake and mosque shooting, the September 11 terrorist attack in New York and London in The Blitz. In Australia's case, bushfires are the most common example.

During our bushfire seasons, there are no individuals more reviled than arsonists. They act against the common good and in many cases their actions kill people, destroy property and disrupt lives and livelihoods. There are severe penalties in place for such people.

Pandemics are rare, so the current situation is (so far) unique in our lifetimes. But as it rolls on, we have seen a similar pattern to other calamities such as terrorist events and bushfires — the vast majority working together to combat it.

But we have also seen a number of politicians and their media surrogates actively undermine public health messaging — they have downplayed the lethality of the virus or said “it's a massive beat up” or “it’s all a power trip for the premiers”. This irresponsible commentary undermines the efforts of our healthcare professionals and the public, in exactly the same way that arsonists undermine the efforts of our fire services in the bushfire season. We don't tolerate arsonists, why do we tolerate these pro-plaguers?

As stated above, much of Victoria's resurgence is due to complacency that has been encouraged by these commentators. The time has come for our federal and state governments to legislate in a similar way to prohibit messaging that undermines public health during a pandemic. We have legislated against arsonists and terrorists — why not these people? They also kill indiscriminately.

And before the squeals of “free speech” start, consider this — it is already illegal to promote terrorism or to compel someone to self-harm or light fires. Pro-plaguers are every bit as dangerous as terrorists and arsonists and should be treated accordingly.

Had we all pitched in as one, as “Team Australia”, to paraphrase former PM Tony Abbott, we would have locked down in March and April for longer and eliminated the virus. We would now have a travel bubble with NZ and businesses would have the certainty to invest and employ. AFL would not be confined to Brisbane, life would be largely back to normal, sans overseas holidays and tourism — but it would have been much better than where we are now and for that, conservative agitators who put short-term profits over people’s lives must be condemned.