When Morrison Government ministers announced tax cuts to come into effect in July, they expected ten indicators would have improved greatly by December.

We know this from Treasurer Josh Frydenberg’s budget speech last April which laid out a plan with specific outcomes:

“First, it restores our nation's finances ... Second, it strengthens our economy and creates more jobs... And third, it guarantees essential services ...”

That was the plan.

The identified outcomes were:

The theory was that cutting taxes would give consumers more money to spend, thus boosting business activity, profits, wages and tax revenue.

It was clear Frydenberg believed the impact would be swift:

“This relief [tax cuts up to $2,160 per family] will flow quickly and be available to Australians after tax returns for the 2018-19 year are submitted in 13 weeks' time.”

All ten critical indicators have indeed moved dramatically since June. All in the wrong direction. In fact, there has not just been deterioration. Most have collapsed to the worst level in raw numbers on record, or the worst global ranking ever, or both.

Does this prove that the budget measures were the wrong solution? If not absolute proof, it is certainly powerful evidence.

The principal data set is the quarterly national accounts, file 5206.0, released last Wednesday by the Australian Bureau of Statistics (ABS).

Household expenditure increased in the September quarter by a minuscule 0.11% over the June quarter. This was the lowest quarterly rise since the onslaught of the global financial crisis in late 2008.

Consumer confidence plunged to a four-plus year low today. Australians are worried about stagnant wages and the cost of living, but Scott Morrison and Josh Frydenberg just want to pretend that everything in the economy is hunky dory. #auspol #ausecon pic.twitter.com/Ql5pI9LS6w

Total retail sales in October were just 2.09% higher than in October last year. That is the second-worst result since records began in 1983. The worst was in October 2017.

Over the four months of this financial year, total turnover is up just 2.39% over last year. Again, that is the second-worst result in recent years, only just ahead of the dismal 2.25% when Scott Morrison was Treasurer in 2017.

Australia’s retail sector is now in its third year of per capita recession.

The Coalition’s 2019 Budget promised 1.25 million new jobs over the next five years, which is 21,000 per month. That is below the working-age population growth projected by the ABS.

In the four months since the budget took effect, jobs added have averaged just 16,260 per month. The jobless rate has worsened since June to 5.32%.

The Treasurer’s promise to “create 80,000 new apprenticeships in industries with skills shortages” was intended to curb the disastrous youth jobless rate, now ranking at an all-time low among comparable countries.

I have said this before, it's time the LNP took ownership of our economic position. For 6 years it was Labors fault & we are now witnessing the shift to World economies fault.
At what point will LNP admit they're clueless? 12th of Never.
https://t.co/Q2ukyBeG8L @IndependentAus

Wages, as we saw here last week, are now at an all-time low in both growth rate and global ranking.

The average wage rise over the full year to the end of September was just 2.23%. With inflation at 1.67%, this represents an annual real wage increase of a puny 0.56%. As this includes high-income earners now reaping huge wage rises, it is clear that many low-income earners – probably the majority – are experiencing wage reductions.

Annual growth for the September quarter was a disastrous 1.74% of gross domestic product (GDP). This makes three quarters in a row with growth below 1.75%. The last time that happened was in 1991-92 when the whole world was whacked by the early '90s recession.

Australia’s ranking in the Organisation for Economic Cooperation and Development (OECD) on economic growth – with most of the world now enjoying a steady boom – has plummeted to a shameful 21st. 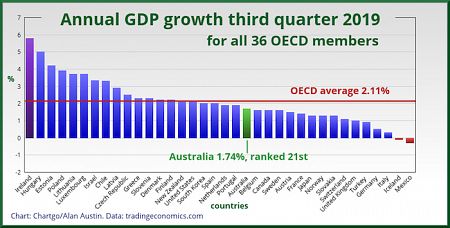 Regular readers will know Australia has always been among the OECD leaders on GDP growth until this Coalition took office. Australia topped the table during the Rudd period.

Four months into the financial year, tax revenue is almost $2 billion behind the budget profile. That’s according to October’s monthly update from the Finance Department. Revenue to the end of October is below 30% of the full year’s budgeted figure for the first time since 2000-01. That was the only other time the shortfall was this low since these monthly reports began.

The accumulated deficit to the end of October was -$14,723 million. In the next eight months, the Government expects to turn that into a surplus of $7,054 million. This seems problematic given the above data. But we shall see.

More than five months after the budget strategy was implemented, it appears to be failing spectacularly. This was not inevitable. Most developed countries are making the most of the current buoyant global conditions with more jobs, better jobs, higher incomes, budget surpluses, reducing debt and better services.

If the Coalition had simply left the settings where they were when they took office, the economy would almost certainly still be among the world’s leaders, where it has been for most of the last three decades.

The nation is not short of treasure. Exports have been above $40 billion for eight of the last nine months. Six of those months set new all-time records. The trade balance is showing record surpluses and the current account surplus has just widened enormously from $4.67 billion to $7.86 billion in September. This follows 44 years of current account deficits.

The country is enormously rich. The problem is that current tax policies are not keeping that wealth in Australia and sharing it with the people.

Are you having trouble getting customers to finish the purchasing process? Nearly 70% of shoppers who add items to an online shopping cart never complete checkout.

Lower your cart abandonment rate and boost your #ecommerce revenue with these tips: https://t.co/7OjEYLpOU0 pic.twitter.com/qswFNb1yIa