Workers not to blame for car making decline

“No country has subsidised its way to prosperity."

No country — that is, except all of them.

Because sectors like automotive production are valuable to any nation. They provide good, skilled jobs. They have flow on effects to boost jobs in other sectors. And manufacturing promotes research and development across the board.

If you value jobs and skills, you have to invest in them.

The government hasn't seemed to realise this and is failing to support Australian manufacturing industries and skills. Instead, they are blaming Australian workers for expecting decent wages in return for a hard day's work.

When announcing his Government wouldn't be assisting SPC Ardmona, Abbott blamed the company's troubles on workers' wages and conditions. He specifically cited the need for workers to be more "flexible" and consider returning to base award wages — that these measures would keep SPC viable.

When Toyota announced it was pulling out, the Government stuck to form and again blamed workers, their wages and their conditions.

This is not only wrong and unfair — it is cruel. 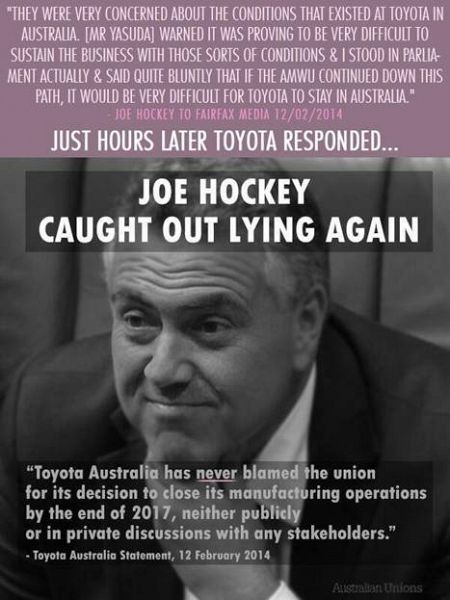 Blaming those who have the most to lose from industries closing is a political act of blame shifting and needs to be called out as such.

But both times they were caught out — and the workers were defended by their employers.

Let’s look at the facts.

An SPC worker typically gets just below $50,000 a year – and wages have remained flat since 2010. I doubt anyone would claim that this is a generous annual salary. The base award – that the Prime Minister is advocating – is half this at $26,000 a year.

One of the main issues confronting SPC is cheap foreign imports coming into the market with little or no regulation and often lax standards.

As the Liberal MP for Murray, Dr Sharman Stone, said:

"This isn't a wage issue, this is more about cheap imports now allowed on Australian supermarket shelves."

In fact, the Productivity Commission has found that labour rates are a minor contributor to SPC company costs. The commission is never shy about blaming unions and workers for excessive costs in any industry, but after looking into SPC, even it has had to admit the issue isn't one of labour costs.

SPC itself came to the workers’ defence, putting out a statement that read: SPC would like to clarify that claims that

‘… the cause of its difficulties are because of ‘over generous’ allowances and conditions to staff, are mistaken and need to be refuted by the facts.’

This is also the case when it comes to the car industry.

The Productivity Commission report released late last month chose to compare Australia's labour costs to those in China and Thailand.

Well I, for one, think we should be proud that Australian wages and conditions provide for a decent quality of life, rather than the poverty endured by many workers in developing nations — or even developed ones.

If the commission had compared the Australian industry to countries such as Japan, Germany and the United States, it would find that wages and conditions are comparable.

The difference between Australia and Japan, Germany and the U.S. is that those countries have governments that back their domestic industries and back local jobs.

Toyota itself also came to the defence of the workers and the union, noting:

‘Toyota Australia has never blamed the union for its decision to close its manufacturing operations by the end of 2017, neither publicly or in private discussions with any stakeholders.’

This showed that Treasurer Joe Hockey’s claims that Toyota blamed the union and workers – published by the Australian Financial Review – were completely false.

So why is manufacturing in strife?

Well, there are lots of reasons — all complex, none of them workers’ fault.

This is partly because other countries like the U.S., Japan and parts of Europe have policies that devalue their currencies and improve their competitiveness. But here, our government chooses to ignore the situation and claim it has no role in supporting industries under pressure, even if that pressure is partly the result of trade partners supporting their own industries or our government's unwillingness to fight for trade that is fair as well as free.

We are also seeing a lack of support from Government — either in active support or in developing a future plan for the sector.

In both the SPC and the automotive cases we see a Government that values some jobs more than others. It was prepared to back the Cadbury plant to hold a marginal seat during the election campaign but not prepared to show the same concern for workers at SPC or in the auto industry.

It is prepared to spend billions in support of the mining, finance and agricultural industries, but not manufacturing.

In order to compete in a global economy and enjoy high standards of living, Australian industry needs to improve productivity, not by cutting wages in a race to the bottom, a race we will never win, but by investing in skills, technology and innovation. And a crucial part of this is having workers engage with management to improve processes, solve problems and find innovative ways to cut costs.

This means a constructive relationship between business, government and workers and government support for investment, skills and innovation. It is exactly what the AMWU, other unions, industry leaders and the former government worked on through the Prime Minister's Taskforce on Manufacturing and the resulting Jobs Plan.

Instead of embracing this high road agenda, the current government has chosen to dismantle productivity improving initiatives and take the low road of wage cuts and blaming workers. This low road will lead to a poorer Australia.

It's more than a shame that Abbott hasn't realised this yet. It puts our livelihoods and the prosperity of our children in jeopardy.

Do we want to be a nation that can't build things, whose prosperity is held hostage by commodity prices?

We will continue to campaign with Australian workers and their communities to make sure that Tony Abbott gets this message before it is too late.

Paul Bastian is national secretary of the Australian Manufacturing Workers’ Union. You can follow Paul on Twitter @paulbastian.

Abbott: "No country has subsidised its way to prosperity." *throws United States, Great Depression, New Deal into the memory hole* 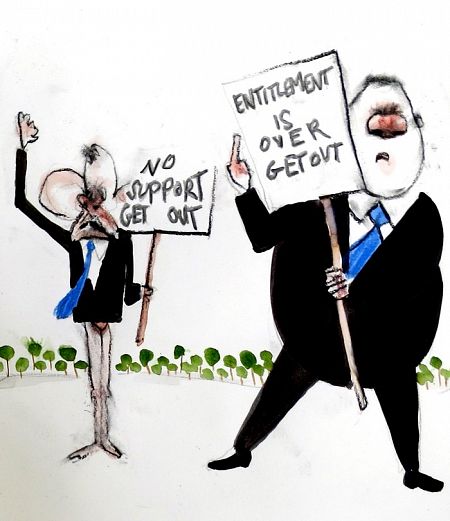 Workers not to blame for car making decline

19 February 2014, 8:00am Do we want to be a nation whose prosperity is held hostage by commodity prices, or ...
Join the conversation
comments powered by Disqus
News updates