Winds of discontent swirl over Borneo

With Malaysia this year celebrating its 50th year as an independent nation, its patchwork settlement is looking increasingly frayed in Sabah and Sarawak, writes Murray Hunter. 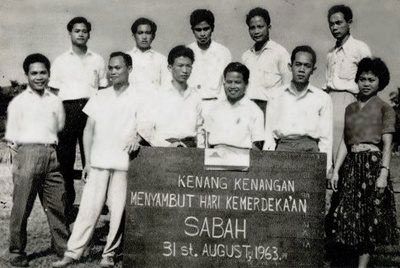 SINCE MALAYSIA’S general election last May, UMNO has been attempting to redefine its electoral base to include bumiputera or native groups across the country – most of them in East Malaysia in Sabah and Sarawak – and not just ethnic Malays.

Malays and Muslim bumiputeras today account for 59.7 per cent of the population, with non-Muslim bumis comprising another 7.6 per cent. That is expected to rise to 67.9 per cent by the next election. UMNO strategists believe that if the party can successfully capture this constituency, it would garner enough votes for the party to continue governing Malaysia into the foreseeable future, simply continuing to disregard the votes of Chinese and Indian voters on the Malaysian peninsula, who turned soundly against the Barisan Nasional, or national ruling coalition in the May election.

A recent statement by Sabah Mulfti Bungsu @Aziz Jaafar calling for the government to classify all Muslim indigenous people as "Malays" seems to support this view. This has attracted criticism from some local components of the ruling state Barisan Nasional coalition, as it ignores the differing histories and elements of cultural identities of peoples of the peninsula and Borneo, and creates many complications around native land ownership because of provisions in state constitutions.

However, this strategy faces problems, with rising discontent in Sabah and Sarawak becoming more and more public. On the eve of a conference organized by the Borneo Heritage Foundation (BHF), former Sabah Chief Minister Harris Salleh personally entered the debate through the local media, saying all Sabah leaders are responsible for the current situation.

This led to a public reply by the State Reform Party Chairman Jeffrey Kitingan, saying that Harris himself should be blamed for what he sees as Sabah's downtrodden and subservient position vis a vis the Malaysian federal capital of Putra Jaya, now effectively Malaysia’s 12th state.

More than 300 people turned up last weekend at a foundation-organized International Forum on 'Malaysia 50 years on: Expectation vs. Reality' in Kota Kinabalu to discuss and debate many of the issues related to the relationship between Sabah and Putra Jaya.

At the centre was a litany of grievances including the Malayanisation of the civil service; the former Sabah-owned island of Labuan, which was taken over in 1984 and made a federal territory; Project IC. the alleged systematic granting of citizenship to illegal immigrants, most of them Muslim Malays from Indonesia; illegal immigrants; border security; the oil agreement, which gives the federal government a healthy proportion of East Malaysia’s crude profits; freedom of religion, and native land rights. All were highlighted as reasons why urgent change is needed in the relationship between Sabah/Sarawak and the federal government.

Sabah and Sarawak didn't enter Malaysia as passive states, according to the conclusions at the forum, but rather were equal parties along with Malaya and Singapore, forming the new entity of Malaysia in 1963. Consequently, Sabah and Sarawak should be equal rather than subservient partners within the Federation of Malaysia. The relegation of Sabah and Sarawak to being mere states within the Federation in 1974 is regarded as effective colonization. Consequently according to Jeffrey Kitingan, Malaysia Day on September 16 is a day of shame rather than celebration for Sabah.

Kitingan told an emotional audience that it is now time to re-evaluate the Putra Jaya relationship to bring back the original intentions and assurances given in the original Malaysia agreement which combined North Borneo, Sarawak, and Singapore with the existing Federation of Malaya to form the modern country.

If one travels around Sabah and Sarawak talking to people, it quickly becomes apparent that many of the sentiments highlighted in the forum are of broad concern to people of all walks of life.

In much more subdued Sarawak, where open discourse is much more low-key, similar sentiments also exist, even within high ranks of the civil service. Although the older generation is loyal to the leaders, younger voters are much more widely exposed to the outside world as they have left longhouses to work in cities and they use social media heavily. They are coming home during festivals and sharing new ideas and values with the older inhabitants. Together with the dissemination of information from Radio Free Sarawak, this is beginning to have an impact on rural areas. In addition there have been major changes in electoral demographics in the urban areas of Sarawak in the last two elections.

However, within Sarawak, many of the up and coming civil servants and politicians themselves are seeing these changes and are aware of the issues behind them. They are looking at remedies and discussing strategies for transformation within the current regime. If this goes to plan, the current government will for a long time remain the dominant force in Sarawak politics no matter what the opposition does.

However there is still discontent with Putra Jaya over administration and policy issues in regards to Sarawak’s governance. On 22 July, the Sarawak government organized a re-enactment of Liberation Day, where the state received independence from Britain — a very symbolic gesture to indicate Sarawak's sovereignty.

However, in Sabah, the state is governed primarily by UMNO, the same party that dominates the federal coalition. Some see this as a compromise to Sabah's interests and ability to express its own aspirations. Although many members of the government and civil service grow tiresome with some of the attitudes of the Putra Jaya administration, they just tend to grin and bear it. This complacency has also been blamed for the erosion of Sabah's rights.

So the vanguard of discontent is led by the evergreen 'old guard' of Sabah's politics and public life, who include people like Simon Sipaun, Lim Heng Seng and Yong Teck Lee, once a chief minister of Sabah, accompanied by a group of influential businesspeople including the flamboyant Paul Voon, under the guise of the Borneo Heritage Foundation and other NGOs.

The problem seems to be that there is no dialogue going on and this is leading to greater frustration among those who want a 'new deal' for Sabah and Sarawak. Rather than any engagement, anonymous sources within the government indicate that if the current talk continues then stern action may be taken. Defense Minister Hishammuddin Hussein Onn has already stated that his ministry will render all assistance possible to the Home Ministry to identify anti-Kuala Lumpur groups in Sabah who are advocating secession. In addition, investigations are underway in an attempt to associate Jeffrey Kitingan with the Lahad Datu incident that occurred earlier this year, in which the Sultan of Sulu sent armed Filipinos to invade the state.

Although some quarters have called for secession, the large majority would be very happy for some recognition of the problem by Putra Jaya. Any further escalation of discussion on this matter could be used as a trigger for the government to move in and stifle discontent, as has been done before.

This issue is putting the very fabric of the Malaysia project under stress. The old adage "a stitch in time may save nine" may be the best course of action.