Why Turkey shot down a Russian plane: The proxy war in Syria

Russia and Turkey have been fighting a proxy war in Syria for several months. After the downing of the Russian jet, they are now in direct conflict with one another. Middle East analyst, Professor Juan Cole, examines the geo-politics behind the escalating crisis.​

THE TURKISH government decision to down a Russian jet operating in the north of the Syrian province of Latakia is breathtaking in its boldness. Russia may no longer be a superpower, but it is a nuclear-armed great power.

The newly elected Justice and Development Party (AKP) government of Prime Minister Ahmet Davutoglu and his mentor President Tayyip Erdogan in Turkey can rule without the help of any other party in parliament, and seems determined to double down on its policy of intervening in Syria.

The Davutoglu government risks substantial economic harm. Russian tourism has boosted the Turkish economy, and Russia was planning an important gas pipeline through Turkey as well as the building for Ankara of a nuclear power reactor. All those activities have just been cancelled, and tour operators in Russia are looking for other tourist markets after pressure from the Putin government.

Russia is attributing the attack to an attempt by Turkish officials to protect gasoline smuggling routes from Daesh (ISIL, ISIS) to Turkey, but the geography of the shoot-down tells against this interpretation. This was near al-Qaeda territory in the northwest, not Daesh territory in the northeast, and the issue is arms smuggling, not oil smuggling.

Turkey has backed a range of Muslim fundamentalist groups in northern Syria in hopes of eventually overthrowing the Baath government of Bashar al-Assad. Turkey is also afraid of the leftist Kurds of northern Syria, which are accused of attempting to ethnically cleanse Arab and Turkmen villages that stand in the way of their establishing land bridges between the three major Kurdish cantons of northern Syria.

The People’s Protection Unites (YPG) or leftist Kurdish militias have already linked two of these cantons, defeating Daesh in order to do so. The third, Afrin, is separated from Kobane by a set of Arab and Turkmen villages north of Aleppo.

The blue territory on the map shows Turkmen villages in Syria. Also home of the proposed security zone pic.twitter.com/qg1k6SG8t1

But there are also Turkmen villages in the north of Idlib province west of Aleppo, and in the north of Latakia province to the west of Idlib. Turkmen populations in those provinces have organized militias and have joined rebel groups fighting the al-Assad government. Some of them have sometimes tactically allied with the Jabhat al-Nusrah, al-Qaeda in Syria, against government troops.

The Turkmen in the north of Latakia province live in an area called Turkmen Mountain near the Turkish border, including the sub-districts of Rabia and Qastal Maaf. The Turks call this area Bayirbucak. It is alleged that Turkey and the CIA are sending weapons for the rebel groups through Turkmen Mountain.

Rabia is just southwest of the Idlib city of Jisr al-Shughour, which fell to al-Qaeda and its allies in late April. This city is a potential launching pad for the conquest of Latakia Province by hard line Salafi groups who are hand in hand with al-Qaeda. 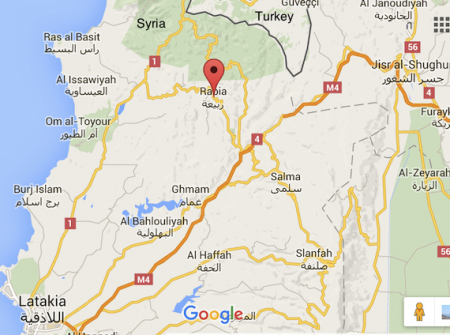 One of Russia’s current strategic goals is to keep Latakia Province from falling to the rebels. Latakia contains a crucial port of the same name, as well as the Tartous naval facility leased to the Russians. Latakia is heavily Alawite, the Shiite group that is a mainstay of the al-Assad government.

Russia appears to have been attempting to cut off a smuggling route for CIA weapons such as T.O.W. anti-tank missiles through Jabal Turkmen by attacking the Turkmen militias of northern Latakia Province, in the interests of shoring up the al-Assad government there.

This attack may also have been intended to panic Turkmen populations into fleeing over the border into Turkey, thus removing a power base for Turkey on the Syrian side of the border and removing a group that would aid al-Qaeda and its allies in Jisr al-Shughour to move west.

The Turkish press has been extremely exercised about this Russian campaign against the Turkmen in Rabia and Jabal Turkmen more generally, and some newspapers appear to have foreseen the attack on the Russian jet.

'The picture has totally changed in Syria. Russian jets have hit and Al-Asad’s Hezbollah-supported troops have started an operation to expel Turkmens from Bayirbucak. Was that a calculated move? Al-Asad’s intention is to widen his sphere of influence by taking control of the Turkmen region with Russia’s support… The more Ankara says that Al-Asad will go, the stronger Al-Asad makes his position.'

The centrist, pro-government Turkish newspaper Sabah wrote on Tuesday, according to BBC Monitoring,

'Now, attacks conducted by the Russia-Iran-Asad alliance against Turkmens have been added to that. The aim is clear: to draw Turkey into the war or to weaken its hand at the table. There are some other intrigues as well.'

'Turkmen Mountain? It is Turkey’s ‘red’ line! No-one should assume that Turkey is just watching and waiting. So many things are being done behind the scenes! We will soon see them. Ankara will not be deterred by Turkey’s enemies!.. What is going on is an ‘unannounced world war’! Briefly, independent Muslim Turkey is putting up a vital fight against the Crusader-Zionist alliance!'

This paper seems to see Putin’s Russia as an Eastern Orthodox Christian power allied with Israel against Turkmen populations. (None of this is true). Its sources appear to have predicted to it Turkey’s dramatic response to the Russian campaign. The center-right Turkiye compared the Russian campaign against Jabal Turkmen as a “Second Gallipoli,” referring to Winston Churchill’s hope of taking the Gallipoli Peninsula in WW I and then marching right up to the then capital, Istanbul, thus cutting the war in the eastern Mediterranean short.

The British empire was thwarted in this plan by a strong Ottoman defense and use of machine guns and artillery. Turkiye is hearkening back to WW I, when Russia attacked eastern Anatolia!

We may conclude that Russia’s targeting of Turkmen, an ethnic group that speaks a language similar to that spoken in Turkey, raised nationalist hackles in Ankara. But in addition, these Syrian Turkmen are religious, just as is the leadership of the ruling AKP in Turkey. And, further, they are a linchpin for Turkish, American and Saudi intervention in Syria, since they appear to be among the arms smugglers getting munitions to the rebels against the al-Assad government.

Although the CIA maintains that these weapons only go to some 45 “vetted” groups that are not extremists, they in fact get into the hands of al-Qaeda and its allies, grouped as the Army of Conquest, as well. Russia must defeat the Army of Conquest and protect the Alawites of Latakia if it is to achieve its war aims in Syria, and appears to have decided to begin by blocking Turkmen smuggling. The Turkmen had their revenge, killing one or both of the pilots who ejected from the downed fighter jet and also taking down a Russian helicopter that attempted to rescue them.

Russia and Turkey are now fighting a proxy war in Syria, and have been all this fall. As of this week, they are not just using proxies, but are directly in conflict with one another.

Turkey and the Turkmen are carving out a sphere of influence in northern Syria and are insisting that Russia recognize it. How severe the conflict becomes depends in part on how Russia responds to this setback for its war aims. It also depends on whether Turkish goals are more ambitious, to help the al-Qaeda-led Army of Conquest take Latakia. If Jabal Turkmen is a red line for Turkey, Latakia port is a red line for Russia. Red lines have a way of turning into hot wars.

This article was first published on Informed Comment on 25 November 2015. You can read the original here. Juan Cole is professor of modern Middle Eastern and South Asian history at the University of Michigan. You can also follow Juan Cole on Twitter @jricole.

Syria: US Boots on Ground risks Conflict with Turkey, not Russia https://t.co/4c5sJEnWar