With an average tax contribution of 21%, the banks will also be the biggest winners of any corporate tax cuts. Rosie Williams reports.

That 21% totals $34 billion in tax paid to the ATO. According to these calculations, the average top-earning bank pays an effective tax rate of just 22.69%.

This table details tax paid by the major banks over the three financial years:

Data collated from  the ATO.

At the same time, returns to the Australian Electoral Commission (AEC) show that these same corporations paid over $21 million to political parties with Westpac standing out with donations totalling nearly $12 million during the 2014–15 financial year alone. 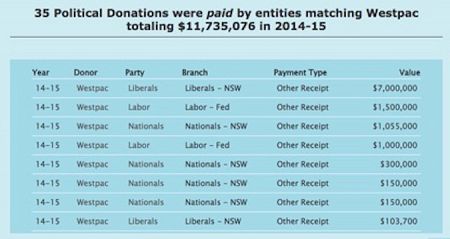 Data collated from AEC via AusGov.info.

The extraordinary donation of over $17 million from Westpac (across all political parties) includes a $7 million loan to the NSW Liberal Party during the 2014–15 financial year:

According to Four Corners, donations to the Liberals had dried up when the AEC withheld election funding after the Free Enterprise Foundation ‘ ... allegedly funnelled funds to the state campaign from prohibited donors under NSW laws', resulting in the NSW Liberals needing the loan from Westpac to maintain solvency.

Situations like this remind us all of the extent to which political parties and industries alike are dependent on the goodwill of the banks.

While there are a large number of top-earning corporations active in Australia that are not required to pay tax under our tax laws (for certain financial years), it is interesting that the banks are not on this list but are among our top taxpayers.

Reasons for this would include their level of profit but may also reflect a lack of availability of the research and development concessions that are often applied to the tax payable by other organisations, reducing their tax bill to zero.

According to Emma Alberici:

​​​​The company’s corporate affairs boss, Liz Deegan, wrote to the ABC to clarify that: “News Corp Australia has deductible operating costs and certain tax incentives and allowable credits, like R&D and franking credits, that offset the revenue disclosed …

Software giant Atlassian, which reported operating losses for the last two years, also pointed to R&D tax concessions when explaining why it too hasn’t paid corporate tax in the period on accumulated revenue of about $1 billion.

While many corporations are able to write off past losses and access various tax concessions along with the resources sector, the wealthy banks have fewer opportunities to minimise their tax bill, so they pay more than most in tax — which makes them major beneficiaries of any cuts. This has been amply demonstrated in the United States where banks are already boasting billions of dollars in profit from tax cuts, triggering a race to the bottom in competing jurisdictions like Australia.