BACK IN THE MID-'90s, when I was studying units at the newly established Southern Cross University (before transferring back to the University of New England from which SCU had recently de-amalgamated), I carried out a small research project titled Status Conflict in the Rental Market. With a campus newly established in the small coastal city and as a young single mother struggling to find appropriate housing for myself and child, I was curious to understand how the influx of students would impact the low-income housing market.

Fast forward 25 years and the private rental market has hardened to such an extent that even those earning a professional income struggle to make it to the front of the long queues for available rental properties.

"One small furnished room for rent"... This is a bathroom!

The impacts of Australia’s housing bubble are not just experienced by the welfare recipients and working poor, now competing for too-few rentals, but the international students themselves as they arrive in a country that has accepted their payment in return for education, but which has neglected their need for available and affordable accommodation.

The Australian Housing and Urban Research Institute (AHURI) explores this policy failure in a recent report:

A largely ignored segment of the private rental market is students. The growth of international students studying in Australia – from tens of thousands in the late 1980s to almost half a million by March 2017 (Department of Education and Training 2017) – has not only had major implications for the education system but also the housing system, with little oversight and inadequate regulation. Unlike many other countries, where universities provide a sizeable proportion of student housing, in Australia students in the main compete for housing in the private rental market or rent accommodation managed by the private sector in partnership with universities.

There are no regulations or policies that require universities or international colleges to provide a certain number of rooms to international students.

Under the National Code of Practice for Providers of Education and Training to Overseas Students 2018 (National Code), prior to enrolling an overseas student, registered providers must inform the prospective student of options and indicative accommodation costs.

State and territory governments are responsible for regulating tenancy arrangements in their respective jurisdictions, including homestay arrangements.

Research carried out by Deloitte Access Economics used ABS data to confirm that the international student market is Australia’s third highest earning export industry, earning Australia over $17 billion annually in GDP. While a thorough estimate of the direct and indirect benefits to Australia of the international education market is put forward by Deloitte, the report makes no attempt to detect or measure any issues for the students or other groups arising from the large number of international students flocking into the overcrowded housing market each year. 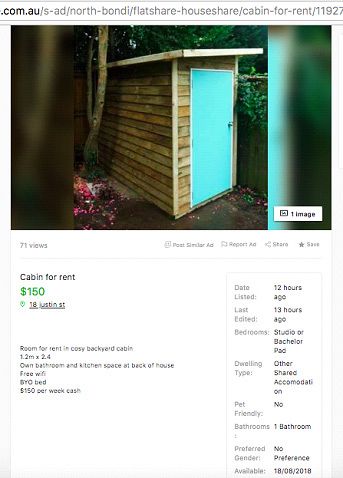 With real estate agents requiring two references each for employment and rental history in addition to identity documents, it is easy to see why young students, whether domestic or international, are unable to compete in a market That's now a challenge even for working professionals.

When those with stronger rental histories and higher incomes have difficulties accessing private rental, then people in the bottom 20 per cent are particularly vulnerable because there is no way in and they cannot compete. Even bedsits are beyond their means.
~ Community agency, Victoria

AHURI goes on to identify negative gearing, capital gains tax, residential tenancy law as "key institutional areas" that have impacted directly on the sustainability and growth of the private rental market due to the failure of governments to respond to key changes over several decades. Significant among those key changes is the influx of the hundreds of thousands of international students that has been propping up our economy over the last decade-and-a-half.

The increasing demand for rental housing has spawned what the AHURI describe in their report as a ‘rogue pathway of last resort’:

The growth of the international student population, particularly over the past decade, has created increasing demand for short and medium-term rental accommodation and opened up new opportunities for exploitation by investors, particularly in the studio and room-rental segments. (p55)

Student advisors generally agreed that gaining entry to private rental was becoming more competitive and that properties were filling up more quickly and earlier in the year than in the past. The high price of accommodation close to universities was impacting the distances (and time) travelled to university, with some choosing to commute very long distances, including interstate, as a more affordable option than renting. Many will remain at home and travel long distances if they have the option. One example is a student who has tried to organise all of her course contact hours on the same day so that she can fly in from Adelaide, where her parents live, as it is cheaper to fly than to rent a place or room in Melbourne.

The recent announcement by Prime Minister Scott Morrison to filter new migrants away from Sydney and Melbourne has met with much derision. Given migrants (including refugees) are outnumbered by international students nearly six to one, it is probably worth considering whether our universities or Government should be required to provide suitable accommodation for all the students they enrol and grant visas. This is in order to not only to protect them from homelessness and exploitation, but to also ease the pressure on other vulnerable groups competing in the low-cost housing market.

On top of that 160,000 are the 600,000+ international students who also have to compete for housing in Australia. It would be useful if new public housing stock could be tied to these numbers to compensate for the impact https://t.co/6MzhJnJngx pic.twitter.com/v35lkumjhI