What has the ALP ever done for us?

The following was recorded at a recent, secret, meeting of the Liberal-National Front of Australia (or was it the National-Liberal Front?) and leaked to Tom Orren.

TONY: Yeah. All right Warren, don't labour the point. And what have they ever given us in return?

MALCOLM: Well, they saved us from the GFC?

MALCOLM: The GFC… they saved us from it. And while they were at it they built a whole lot of new school buildings and insulated nearly every home in the country.

WARREN: You've got to admit Tony, they did do that.

GEORGE: And there’s the NBN. 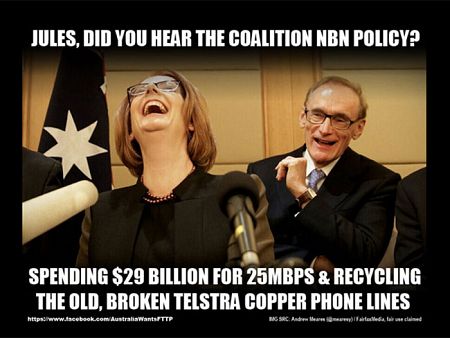 TONY: Yeah. All right. I'll grant you, saving us from the GFC and building the NBN are two things the ALP have done but what else have they done?

TONY: Well, yeah, obviously there's the NDIS. The NDIS goes without saying, doesn't it? But apart from the GFC, the NBN, and the NDIS, what have the ALP ever done?

CHRISTOPER: What about the Murray-Darling Basin Agreement?

JOE: … and Medicare reform... and Denticare…

SOPHIE: They did get rid of Work Choices...

GREG: … then there's the Gonski Reforms.

DAVID: What about the expert panel?

SOPHIE: … and what about plain paper packaging for cigarettes?

OTHERS: Oh yeah, forgot about that.

GREG: … and there's the price on carbon.

BARNABY: Oh shut up Malcolm! But they did make that apology...

PETER: … and what about the Minerals Resource Rents Tax?

IAN: It was kind of neat the way they made all those billionaires and multinationals cough up $800 million.

TONY: All right, all right… but apart from the GFC, the BER, the NBN, the NDIS, the Carbon Price, the Gonski Report, the Apology, the MDBA, the MRRT, Medicare reform, Denticare, plain paper packaging, the poker machine reform trial, improving the live animal trade and getting rid of Work Choices what have the ALP ever done for us?

TONY: So we’re all agreed. There is not one of us who would not gladly suffer death to rid this country of the ALP once and for all.

(With apologies, and homage, to ‘The Life of Brian’.)