The recent anti-government protest highlights the problems facing Cuba but the question of why and where the blame lies needs once more to be addressed, writes Dr William Briggs.

THE MEDIA has made it clear that there is discontent in Cuba. There are shortages of just about everything. Its economy is in tatters. The pandemic is wreaking havoc. Medical supplies are running low. Inflation is running high. Food is a problem. These are real problems that threaten lives.

Why is this happening, and who is to blame? Interestingly, the anti-government protest and the exhaustive media coverage came just two weeks before the celebration of Cuba’s National Revolution Day on 26 July. Of equal interest is the total blackout of any pro-government rallies that did take place.

The coverage of the protest is meant to give the impression that there is a simple explanation for all of this. The media explanation and that of the Government of the USA is that it is the fault of the Cuban Government, a lack of democratic reforms and the continued rule by the Communist Party. The consistent policy of the United States to destroy its irksome neighbour is overlooked but that policy needs to be remembered.

For the last 60 years, the United States has maintained a harsh and effectively illegal embargo on Cuba.

In 1960, the U.S. State Department discussed ways of strangling Cuba and argued that:

The only foreseeable means of alienating internal support is through disenchantment and disaffection based on economic dissatisfaction and hardship.

...it follows that every possible means should be undertaken promptly to weaken the economic life of Cuba. If such a policy is adopted, it should be the result of a positive decision which would call forth a line of action which, while as adroit and inconspicuous as possible, makes the greatest inroads in denying money and supplies to Cuba, to decrease monetary and real wages, to bring about hunger, desperation and overthrow of government. 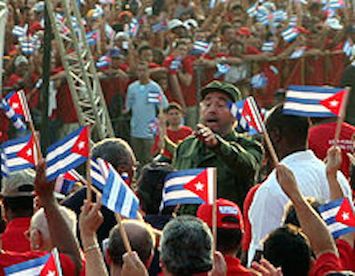 Castro's death has inspired grief and celebration, but it is the death of his revolutionary spirit we should mourn.

Those words, in a memorandum from Lester Mallory, Deputy Assistant Secretary of State for Inter-American Affairs to his immediate superior, Roy Rubottom, admitted that the majority of Cubans supported the regime, that communist influence was popular in the country and that any military operations against the Cubans would be likely to fail.

Instead, the slower but equally painful policy of economic hardship deliberately aimed at producing hunger was implemented. It cost the United States nothing but cost the Cuban people decades of suffering. These same measures, according to a report from Al Jazeera in 2015, has cost the Cuban people $1.1 trillion (AU$1.5 trillion). Those dollars add up to a lot of food, medicine, agricultural and economic developments and also to deaths. The Cuban people failed to get the message and have not “risen” up against their government.

Successive U.S. administrations have maintained a vengeful campaign against the island for daring to defy it. America has isolated itself more and more in the face of the world. The blockade has been routinely denounced by the United Nations. In June 2021, the General Assembly passed its annual resolution (the 29th in 29 years) demanding an end of the economic blockade.

A total of 184 nations supported the resolution while just the USA and Israel voted against it. Only three countries – Columbia, Brazil and Ukraine – abstained. The fact that America is so isolated in the world counts for nothing. The blockade will continue.

‘We stand with the Cuban people and their clarion call for freedom and relief from the tragic grip of the pandemic and from the decades of repression and economic suffering to which they have been subjected.’ 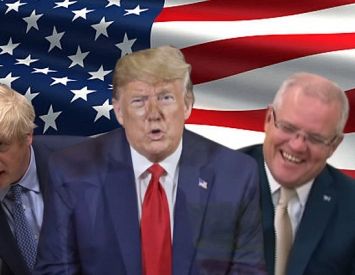 Global export figures show which countries are handling current economic conditions well and those which aren’t. Australia is among the losers, along with Britain and the USA, writes Alan Austin.

Sixty years of economic hardship have been inflicted on Cuba at the hands of successive U.S. administrations. The brief “thaw” under Obama that permitted travel and allowed remittances to be sent into Cuba was ended under Trump and the blockade was reinforced.

The current occupant of the White House has pledged to keep the blockade in place, no doubt as a symbol of his support for the Cuban people and to relieve ‘economic suffering’. It is a distorted view of the world. If he cared a fig for the suffering Cubans, he would lift economic restrictions and allow free and open trade between Cuba and the world.

Regardless of political orientation, a simple fact remains. Trade and the exchange of goods and ideas are essential for survival. The blockade operates as a most basic and grotesque bullying tactic. It may be aimed at Cuba but threatens all nations equally. An individual company or a national economy is given a choice by the USA. You may trade with us or with Cuba but not with both. If you deal with Havana, then the doors to U.S. markets will be closed to you and the USA will not import anything from you. This is “free trade” U.S.-style, or possibly it is just plain and simple economic imperialism at work.

Cuba has, since the collapse of the Soviet Union, been harried and starved by the USA. Its economy, always a little shaky, has been decimated. In more recent years, tourism had become a lifeline for the island and with it a vital source of foreign currency. The pandemic has put paid to that. The people are struggling, there is no question of that. For 60 years they have struggled. Memorandum 499, from Lester Mallory to Roy Rubottom all those years ago, set the course for the struggle and hardship that unnecessarily followed.

The fact that Cuba is about to celebrate 62 years of independence in the face of such relentless aggression is nothing short of astonishing. The United States may argue that Cuba is not democratic and that its people are not free but after all of those 62 years, it remains defiant in the face of the greatest power on Earth and so the campaign to hurt the innocents will continue.