UK beats U.S. economy, but it's nothing to skite about

With Brexit, Britain has been the focus of attention recently and Alan Austin explores what the world – and the U.S. – might learn from this.

LET'S TAKE a close look at the United Kingdom’s economy. Come on. You know you want to. Actually, it is intriguing and not just for econometrics wonks. But to make it even more enthralling, we will bring along Donald Trump. We can then ponder questions of interest beyond just Britain.

Which has the better economy, the USA or the UK?

Anyone with a passing interest in American politics will have seen President Trump tweet that the USA has a "booming" economy with "countless successes" like his new trade deals. Trump also tweeted that ‘Obama sure didn’t build this economy’. Because Trump did himself when he ‘cut taxes, cut regulations and the economy boomed!’

Last month, Trump assured us that he had generated the ‘BEST USA ECONOMY IN HISTORY!’  – in capitals, so we know it is true. And in late January, ‘We have the hottest ECONOMY on Earth!’

Well, these are all fever dreams. Totally false. The opposite of the truth, in fact. But we are not breaking news here reporting that Trump lies. Let’s compare the U.S. and UK economies on the key variables.

Annual growth in gross domestic product (GDP) in the USA was 2.3% in the fourth quarter of last year, compared with just 1.1% in the UK. Mind the gap. Both are outside the top 100 countries, with the USA ranking 102nd and the UK 142nd. These two are the only major indicators where the USA leads the UK.

The USA suffered a blow when January’s inflation number reached 2.5%. Trump supporters had been boasting about annual wage rises of 2.6%. But we now see most workers have had little if any real increase. The UK is doing much better with 1.8% inflation, pretty much in the sweet spot.

This has been an area of strong improvement for the UK, with a steady reduction in the budget deficit over the last nine years and a 2019 outcome in of just 1.8% of GDP. Not bad. In contrast, the U.S. deficits reduced steadily from 2009 to 2015, but have blown out every year since then, coming in at an appalling 4.6% of GDP last year.

The UK ranks equal 66th globally, while the USA is a lowly 135th. That’s out of 181 economies listed on Trading Economics. 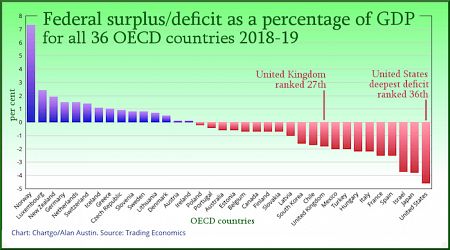 Among the 36 wealthy, developed members of the OECD, the USA ranks a dismal last. This really should put an end to Trump’s mendacious tweets. But it won’t. So let’s proceed.

U.S. debt to GDP is in the world’s highest ten at 106.9% of GDP. Trump has added a staggering three trillion dollars to the Federal debt just since his monumentally foolish tax cuts in late 2017. Debt to GDP in the UK is still high at 80.8% of GDP, sitting at 25th in the world, ranked from highest debt to lowest.

British exports are rising steadily. Over the last two years, monthly export values have set new records seven times, including the impressive surge in December. This contrasts starkly with the disastrous slump in the USA. Export values peaked in May 2018, the month Trump imposed tariffs on steel and aluminium. They have been below that ever since.

The rationale for Trump’s costly trade wars was that the monthly trade deficits were way too deep. They had averaged $40.7 billion (AU$62.6 billion) over the last eight months of the Obama period. Trump’s tariffs folly – now abandoned after countless tens of billions in lost treasure and many thousands of farmer suicides – has resulted in trade deficits over the last eight months averaging $50.9 billion (AU$78.2 billion). 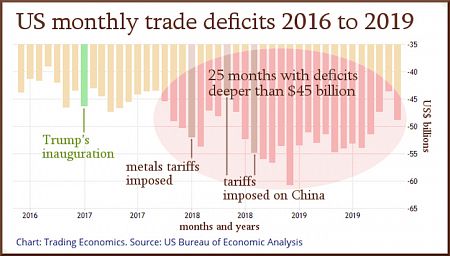 The UK, in dramatic contrast, has enjoyed trade surpluses in three of the last six months — the latest for December being a healthy £7.72 billion (AU$15.2 billion).

Other indicators on which the UK is streeting the USA include the housing index, tourist arrivals, mean wealth per adult, equality of wealth distribution, economic freedom, the corruption index and government revenue, which is surging immediately post Brexit.

Overall, the UK economy is way ahead of the U.S. economy, yet neither current Prime Minister Boris Johnson nor his predecessor Theresa May has bragged about its elevated temperature.

You want to be sharing this one near and far. How you feeling Josh?#auspol
World’s best economy 2019: No, not the Coalition's Australia https://t.co/oTq8n5dvVU @IndependentAus

Nor should they. As the latest IAREM calculations showed, the British economy ranked 33rd in the world in 2019 and the American economy ranked down at 37th.

Trump’s insistence that his economy is the best in the world simply confirms he is self-deluded or a supreme con artist – or both – and that those who believe him are very easily duped. Few populations seem as susceptible to con artistry as Americans. Certainly not the Brits. Which brings us back to Brexit.

Will the British economy win or lose after Brexit?

This is not just an academic question. Other European countries have internal movements urging exit from the Union. These include France, Denmark, Greece and the Netherlands. So Britain’s progress outside the EU will be fascinating to watch over coming months and years.

Will the economy collapse and the Brits come crawling back into Europe? Will it boom like the fantasy in Trump’s bizarre imagination? Will there be a period of painful adjustment? Will other countries follow Britain’s lead?

We shall see. Meanwhile, the Brits will likely keep calm, switch from Stella Artois to Newcastle Brown Ale and carry on.

Here's the Truth: Trump's Economy Is an Absolute Disaster for People and the Planet!👎😡🤬

Trump may be good for the top 1%—and especially for the top 0.1%—but he has not been good for everyone else. If fully implemented, the 2017 tax cut...