There is plenty in last week’s quarterly national accounts that the Coalition Government does not want voters to discover, as Alan Austin reports.

THE SHARE of Australia’s income going to workers is now at an all-time low. The big corporations are getting the highest share ever. These are two pretty important facts that the Morrison-Joyce Government and the mainstream media – who are all big corporations – want concealed.

They are well-hidden in the extensive files published last Wednesday by the Bureau of Statistics. But they are there.

With an Election looming, the following 12 are even more relevant and urgent:

We must remember that over the last five years, Australia’s GDP went badly backwards in three quarters and stayed almost flat in another five. Most of these setbacks were before the COVID-19 pandemic. So Australia has a long way to go to restore lost growth under Coalition policies. 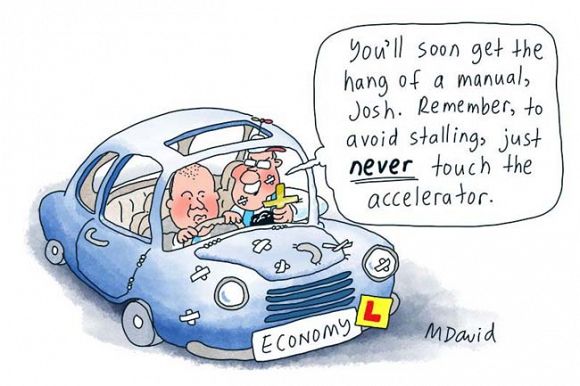 The last time growth over two years was below 4% before Josh Frydenberg became Treasurer was in 1992 during the early 1990s global recession.

3. Annual GDP growth to the end of December 2021 was 4.2% which superficially looks okay. But given the strong global recovery from the COVID recession and Australia’s booming exports, 4.2% is actually feeble.

For much of the post-war period, Australia’s growth has been in the OECD’s top ten. During the Global Financial Crisis (GFC) Australia was frequently in the best three, leading the world twice in 2009.

5. Productivity has flatlined again, for the second time under this Coalition. Wednesday’s level was 103.0 index points, where it was six quarters ago.

Productivity also stalled when Scott Morrison was Treasurer, shifting from 98.5 in June 2016 up to just 98.8 in December 2019, a lift of 0.3 index points in three and a half years.

That contrasts with the strong rise of 8.7 index points between December 2008 and December 2013.

6. As referenced at the top here, 29.9% of total national income for the December quarter went to corporate profits, the highest December outcome since records began in 1959. The long-term average before this Government took charge is 22.7%.
A dismal 50.3% went to workers, who are the vast majority of Australians. The historic average is 55.0%. See blue chart, below.

7. Trade with China and exports overall have been much stronger through the COVID recession than through the GFC. Through that recession a decade ago, the highest level exports reached was in 2011, at 19.6% of GDP.

This should finally kill the zombie belief that trade with China saved Australia from deep recession during the GFC. It didn’t. Rapid, well-targeted stimulus did. Then again, it is a zombie belief.

8. Most of Treasurer Josh Frydenberg’s claims are misleading or false. His email to supporters last Wednesday made many dubious claims. See below. The assertions we have highlighted in red are all refuted by the evidence.

Australia’s lagging GDP growth and zero productivity increase do not indicate a strong economy. Refer points 1 to 5, above. 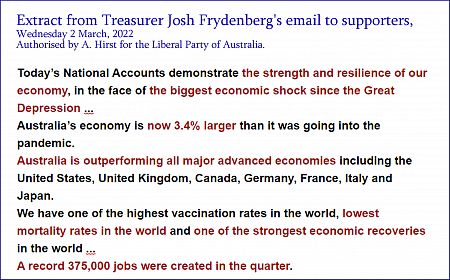 9. The COVID downturn was short, sharp and shitty – to deploy the precise technical descriptors – but nowhere near as severe as the recessions of the early eighties, the early nineties or the GFC. Around ten developed economies avoided a recession altogether through the COVID crisis. None is still in recession today.

10. Australia is far from ‘outperforming all major advanced economies’. Australia ranks an appalling 28th in the OECD and around 40th in the UNDP list of developed economies. See points 3 and 4, above. This is just a blatant, bare-faced lie.

11. Australia does not currently have a low COVID mortality rate. So far this year, Australia has lost 121.7 lives per million population. That ranks 103rd among countries with populations above one million.

12. It is not true that ‘a record 375,000 jobs were created in the quarter’. Most of those jobs were not “created”. They are being slowly clawed back from previous disastrous job losses.

Frydenberg wants us to forget that 618,200 jobs were lost in the second quarter of 2020 and another 303,500 in last year’s third quarter. The total jobs added over the last two years is a miserable 275,300 — very low historically.

Why so many shameless deceptions? When is the next Election?