As IA winds down for the year, Doc Martin abandons his pursuit of the media and casts a jaundiced eye over the Fizza’s achievements of 2016. His studious research has settled on only one thing — Turnbull is still in the Lodge, but only because he’s done a Bradbury close to the year’s finishing line.

THIS WEEK, a schlock-horror movie aired on television and it’s a great metaphor for Malcolm Turnbull’s 2016.

Like the Fizza and his frenemies, it is hard to care for any of the characters in this awful movie. They resemble politicians in that their facial expressions mimic sincerity and other human emotions, but their eyes are hollow, dead black holes that reveal the inner mechanics of their soul-less existence.

Three-headed Shark Attack is terrible. It has poor production values, but a high body count, which is de rigueur for a B-grade horror film.

Turnbull’s 2016 also resembles a B-grade horror movie, the script is boring and repetitive – “It’s Labor’s fault”; “Jobson Groath”; “Debt and Deficit Disaster” – and it doesn’t make much sense to the audience. 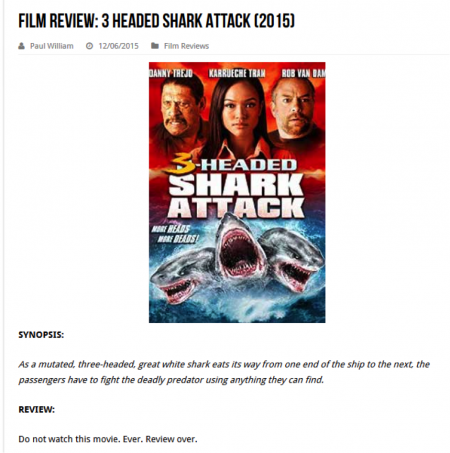 The three-headed shark of the movie is a mutant that grew in the “Pacific garbage patch” — another, perhaps unwitting, metaphor for the diabolical swamp that is the Australian Parliament under the thumb of the Coalition Government. For Malcolm Turnbull, the mutant shark symbolises his nemesis, Tony Abbott. Like the Selachimorpha Triceps in the movie, Abbott refuses to die, even though his battered nonce was symbolically removed when he was rolled from the PM’s chair.

The three-headed shark has the hydra-like ability to grow new heads when one of the original three is severed, so it appears to have five heads at one point. This is also symbolic of the struggle Turnbull has had this year to slay his opponents within his own party. Even with Abbott relegated to the back bench, he has kept up his attacks on Turnbull, aided and abetted by George Christensen and Cory Bernardi. In the wings, cabinet ministers Peter Dutton and Scott Morrison continue to signal their support for the Christian rightwing of the Liberal Party.

Turnbull has not succeeded in cementing his party room victory of 2015, despite “winning” the 2016 election in his own right. Turnbull remains a captive of the three-headed shark, despite his best efforts to kill it.

Over all, it’s fair to say that 2016 has not been kind to the “Fizza”, in spite of, or perhaps because of the election victory. Turnbull took the coalition from a comfortable majority in the lower house to the embarrassing position of losing a vote because the party whips are incompetent.

His signature policies are in tatters and the “debt and deficit” disaster has hit home. Nothing that Treasurer Morrison has done, or says he will do, seems to be able to turn the Australian economy around. Even as late as the week before Xmas, ScoMo has been roundly pilloried for his mid-year economic forecast MYEFO, which has cut company taxes, reined in social security spending and threatened Australia’s global “Triple A” credit rating.

You could be forgiven for thinking that Scott Morrison is only acting as treasurer in the same way that the “stars” of Three-headed Shark Attack are “acting” their way through this awful piece of straight-to-DVD crap. ScoMo’s performance has been unconvincing and only beaten in the “wooden actor/politician of the year” stakes by his finance minister co-star, Mathias Cormann.

Turnbull has lurched from crisis to embarrassment and back again over the course of this year. Unlike King Midas enriching himself through a golden touch, everything that Turnbull has handled this year has ended up as so much unusable footage on the cutting room floor of #Auspol — The Sequel.

Turnbull’s one big achievement this year is that he has survived as prime minister and Liberal Party leader. This is huge, because after the humiliation of nearly leading his government to defeat in the July 2016 election, Turnbull was vulnerable — though perhaps calling this an achievement is giving him too much credit for political skill. It might be better to put this “victory” in the “doing a Bradbury” category. There’s so much in-fighting among the front-runners to replace Turnbull, there is no consensus candidate.

Check it out! The most unexpected Gold Medal in history won by Steve Bradbury. Salt Lake 2002.

The Liberal talent cupboard is bare and the most likely contender for Turnbull’s job, Foreign Minister Julie Bishop, is almost as hated by the right of the party as Turnbull. The right’s potential candidates, Dutton and Morrison, are so publicly unpopular and so inept (though cruel and ruthless) that they would almost certainly lead the Liberals to defeat at the next election.

So what has Turnbull done in the 15 months since he knifed Abbott and put his well-upholstered arse into the Lodge?

There’s not a lot of stuff Turnbull or the Government can be proud of, and even media commentators who want to be kind to the Fizza have had trouble coming up with anything of significance. Writing for news.com.au, veteran political observer Malcolm Farr described Turnbull’s “victories” in 2016 as a series of “close shaves” and concluded that he survived the year, but only just.

The last week of Parliament this year saw the government’s “backpacker tax” proposals narrowly scrape through a Senate vote, but only after two-weeks of high farce and confusion among senior coalition figures. As Malcolm Farr noted getting the tax through the Senate was a “rushed rescue” of the prime minister by Richard Di Natale’s Greens and Pauline Hanson.

The whole year has been like that for Turnbull. He has had many close calls and too many thought bubble exercises from an ill-disciplined Cabinet that have ended in humiliation.

Even many of the Liberal Party faithful found it difficult to name any significant achievements by Turnbull this year. Tony Abbott’s former chief of staff, Peta Credlin, could not be expected to praise Turnbull, but her response to a question from Andrew Bolt sums it up perfectly.

Like the hapless tourists in Three-headed Shark Attack, Turnbull survived 2016 by the skin of his teeth.

This year, the Fizza has been monstered more than once by Andrew Bolt, who has been unable to hide is broken heart over Turnbull’s “betrayal” of Tony Abbott. Bolt has described the Turnbull prime ministership as ‘a series of random events’, rather than a coherent government and that is an apt description.

Turnbull’s survival is also the key achievement for 2016 given that he has consistently been behind in the polls and recently became even less popular than Tony Abbott. Given that Abbott’s unpopularity was a key reason for the September 2015 party room coup, the fact that Turnbull is still there is, again, compelling evidence that there is nobody whom a majority of the Liberal parliamentary cohort can agree on to replace him.

I have concluded that Turnbull, like the few survivors of the Three-headed Shark Attack, is lucky to still be alive. It wasn’t bravery or skill that saved him, it was a flaw in the script and a piece of trick photography. However, in the interests of balance, I thought it only fair to present what has been promulgated to the Liberal Party faithful as a list of "some" of Turnbull’s achievements so far.

Some of these are marginal at best and some are just window dressing, but this is the official list from the Liberal Party’s own homepages.

For a more comprehensive list, I offer you the motion moved in the last sitting week by Liberal backbencher, Trent Zimmerman. 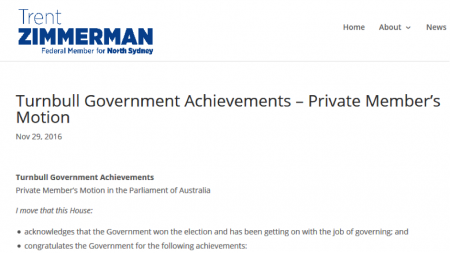 No, no, stop laughing, this is serious.

I know, it’s easy to poke giant craters in this list, just like the huge flaws in the plot, dialogue and camera-work in Three-headed Shark Attack. But this is not a movie review, this is how this inept and bungling mess of a government would like its 2016 to be remembered. It is now part of the parliamentary record. There’s also a few things missing:

IA's list of how this inept and bungling mess of a government should be remembered:

Perhaps, in the comments section, knowledgeable IA readers might like to unpick these shonky “achievement” lists and put forward a more honest reckoning.

To be blunt, I don’t have the stamina and I’m too busy laughing my socks off at the ongoing clusterf*ck that is the Turnbull government.

No doubt the new year will be another interesting period for Malcolm Turnbull. Will the Fizza make it to Christmas 2017 as Prime Minister?

I wouldn’t bet on it just yet.

Wonder if anybody in this govt understands the level of incompetence of those who are supposed to be managing our economy. Seems not #Auspol pic.twitter.com/UkwI4pqlgM

Beat the media Murdochracy! Subscribe to IA for just $5.