THE RISE of Donald Trump isn’t a purely American phenomenon. It is a global one and, in large degree, a consequence of the blind adherence to an ideological view of the best way to manage economies.

"Trickle-down" economics took control of both sides of politics in many countries in the late 1970s and early 1980s, and has since then been taken to an extreme — particularly in the U.S. As a result, it has created a mass of resentment and anger among those who feel left behind and disenfranchised by its consequences.

A few facts tell the story of the U.S. over the last generation: 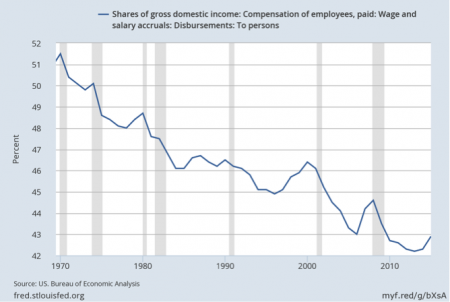 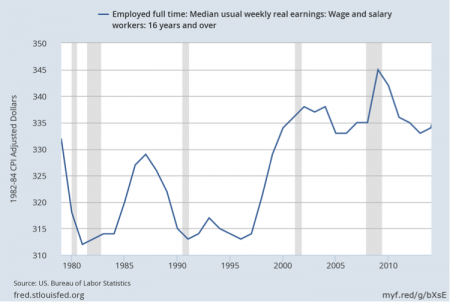 The Gini Ratio is a standard measure of inequality, and the increase in this statistic, based on data from the U.S. Census Bureau has been inexorable for decades, and is surely unsustainable. What cannot be sustained inevitably will not be sustained inevitably. At some point, the inequality chickens will come home to roost. Perhaps not yet under President Trump, although there is little doubt there would have been a fight-back under a Sanders presidency. 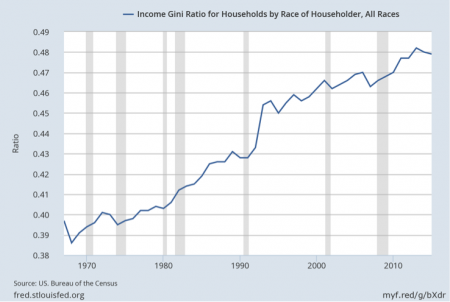 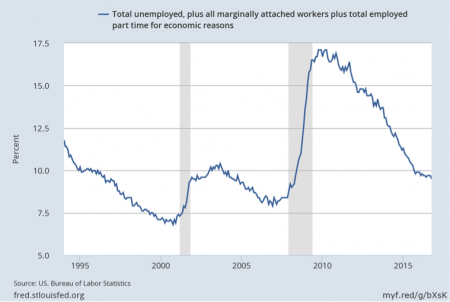 Let’s look at some data, calculated by Pavlina Tcherneva of the Levy Economics Institute at Bard College, in New York.

There have been ten economic recoveries, following recessions, in the U.S. since 1945 and the share of the increase in income going to the top 1% has increased from 1% (in the recovery of 1949-53) to 95% (in the years 2009-2012). That’s not a misprint, and, in fact, the incomes of the bottom 90% of the U.S. population actually fell during the recovery from the Great Recession of 2009, with more than the whole of the economic expansion going to the richest 10%, and – obviously – especially the top 1%.

Perhaps you might like to read that last paragraph again. From 2009 to at least 2012, even as unemployment was falling, the incomes of the bottom 90% of the U.S. population actually fell.

even as unemployment was falling,

the incomes of the bottom 90%

of the U.S. population actually fell.' 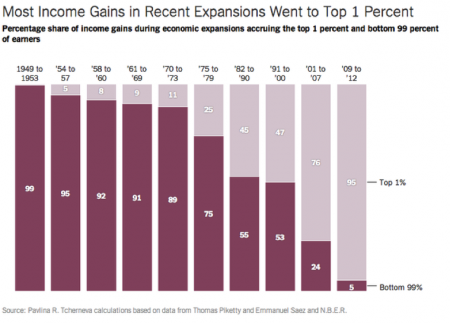 Chart reproduced from BillMoyers.com, based on Pavlina Tcherneva’s calculations

Ordinary Americans have had to struggle increasingly hard to get by and pay for what most people regard as the basic necessities of a modern life. It has become common for people to take on two or even three jobs to survive — and yet the U.S. has amongst the highest childhood poverty rates in the developed world.

These facts were loudly and repeatedly made clear by Bernie Sanders in his campaign for the Democratic Party nomination, as he called for changes in government priorities to reverse the increase in inequality, extend access to health care and college education and move America back onto a path of growing racial, gender, religious and social justice, and away from the cult of individualism, greed and personal wealth for the few.

Bernie Sanders on “trickle down” economics.

This has happened during both Democrat and Republican administrations. The name of Clinton is linked by many with the NAFTA free trade agreement with Mexico, which threatened the security and the wages of many low paid Americans, and with measures in the late 1990s that opened up U.S. banking and financial markets to a deregulated free for all. This led eventually to the misery of the Great Recession and the outrage of a rescue for Wall Street not matched with an equivalent rescue for Main Street.

The Democratic Party leadership, no less than their Republican rivals, came to be seen as part of that establishment, which had abandoned and taken for granted the acquiescence of millions of disenfranchised, frustrated and increasingly disillusioned American voters.

At the very heart of that establishment appeared to be Hillary Rodham Clinton.

In 2016, many of those angry people struck back.

How strange that, in their anger, they have chosen to support a billionaire like Donald Trump as a means for doing so.

Perhaps the Democratic National Committee should have offered them the chance to vote for Senator Sanders.

What The Electoral Map Would Be If Bernie Sanders Had Run Against Trump (using exit poll data) https://t.co/HEBNDQFyCp

More generally, perhaps political elites in many countries around the world should have taken more note of the needs and aspirations of the great mass of the populations, whose interests they claim to represent and to understand that “trickle down economics” doesn’t work, that it has been shown not to work, and that people are beginning to understand this.

Joseph Stiglitz: American incomes have been going down year after year.

Because, for all his populism, I don’t really believe that Donald Trump would have been the number one pick for the previously disenfranchised mass of Americans. Given a choice, they would have opted for Sanders and for his policy platform, which was designed by people like modern monetary theorist Professor Stephanie Kelton to get Americans back to work in secure and well paid jobs, to make college education available to all, to make health care available to all, and to reverse the drift towards an unequal and unjust state.

Here's a solution to paying for public services: Stop worrying about the deficit, says the brilliant economist Dr... https://t.co/XA3OzqLZUA