Donald Trump’s base has become increasingly radical and violent and the expansion of this fascist movement will be his only lasting legacy, writes Dr Rashad Seedeen

U.S. PRESIDENT Donald Trump and his supporters have dragged us into a whole new era of shameless debasement of democratic process.

The siege upon the Capitol came after a Trump rally where the President continued his false accusations of voter fraud and incited his followers:

Drunk from Trump’s provocative rhetoric and delusional righteousness, the protesters stormed the Capitol with little resistance from the police.

Shamelessly empowered in the protective shell as a mob, the protesters crudely disgraced the political epicentre of the United States with reckless abandon. Their acts of violence and crude disregard for the sanctity of the Capitol have been well documented.

However, not enough attention has been paid to the overrarching purpose behind their acts.

These protesters engaged in acts to maximise public attention, and crudely flexed their fascist political power in order to demonstrate their willingness to use violence for political gain and as a repudiation of the Congress’ authority.

Protesters came prepared, armed with chemical irritants, tasers and guns, including one man armed with a semi-automatic rifle and 11 Molotov cocktails.

Later, police found pipe bombs at both the Democratic and Republican conventions. No terrorist charges have been laid as yet.

Even police were not exempt from the violence. One officer was beaten by a mob, repeatedly kicked and tasered while another was so injured he later died in hospital.

Only 12 arrests were made at the time. Later, that number increased to 82 — mostly for those who had broken the imposed curfew.

While the violence unfolded, Trump continued his support for the rioters. His press secretary strangely asked protesters to ‘remain peaceful’ and Trump released a pre-recorded video asking protesters to go home, saying “we love you, you’re very special”.

The global spectacle of these scenes of mob violence was presented as a shocking development in the wildly unpredictable circus that is Trump politics.

But the reality is that this is the culmination of concerted political machinations of Donald Trump and his inner circle for the last four years, which has only become more radical and unhinged in the final year of this administration.

From Charlottesville to the armed occupation of the Michigan capitol, from the rise of Proud Boys to Kyle Rittenhouse, Trump’s fascist movement has shamelessly glorified violence as a righteous defence of their movement.

The Capitol siege is a preview to the post-Trump world.

President-elect Joe Biden will be able to reverse many of Trump’s policies and positions on global affairs like climate change, global cooperation, immigration and national security.

Yet Trump’s fascist movement will continue well beyond his administration. 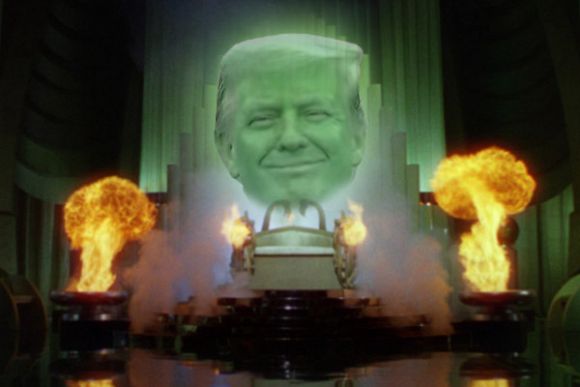 Donald Trump: A great man of history or a Wizard of Oz

U.S. President Donald Trump used his abilities as a conman to win over the public and key political figures during his time in office.

Fascism is a violent political movement characterised by its ultra-nationalism and belief in an inherent superiority to the other, disregard for democracy and the rule of law; disdain for establishment media; sexism; the violent alienation of targeted social groups; and a blind trust in a “strong leader”. Fascist ideological foundations are based on a desire to return to an imagined past utopia and delusional belief in victimhood against an elitist system.

Antonio Gramsci, a leading Marxist and victim of the Mussolini regime, provided an insightful explanation of the rise of fascism. He argued that fascism could emerge when political institutions are hollowed out and civil society support for the state is weak.

Trump has contradicted the office of the President to systematically undermine the political institutions of the United States, whilst amplifying his authoritarian approach to politics and the increased radicalism of his movement.

For the last four years, ongoing support and amplification of Trump’s racist rhetoric and baseless claims found a welcoming home in the global Murdoch media empire, including Australian publications like The Australian, the Herald Sun, the Daily Telegraph and in broadcasting, Sky News.

Such support has provided much oxygen and legitimation to Trump and his fascist movement, acting as an ideological megaphone for his message.

The majority of the Murdoch press has only abandoned Trump once it became clear he had lost the U.S. Election.

Yet until then, Trump enjoyed positive press coverage from the Murdoch propaganda machine, while the establishment media treated him like a fascinating clickbait spectacle, providing a widening platform for his political demagoguery.

Trump’s enduring slogan of “Make America Great Again” has implied fascist signalling that America is only for the chosen (White) people and that it can once again return to a position of strength, but only through the stewardship of the almighty Trump.

Trump has also expertly tapped into the disenfranchisement of growing numbers of Americans and others in the West who have felt abandoned by the promise of liberal democracy and an economic system designed to improve their livelihoods.

Historically, fascism as a political movement gains momentum after the institutions of liberalism can no longer adequately protect society from the ravages of capitalism in crisis. Adherents see themselves as victims of the political establishment and global forces where only a strong leader can save them. 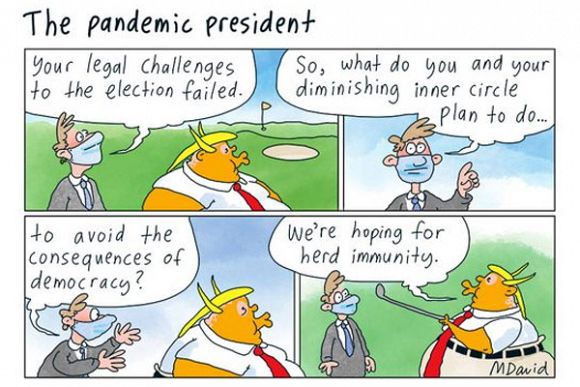 President Trump gained a number of loyal followers during his time in the Oval Office, but there are reasons why his popularity may wane.

Trump’s simplistic solutions of America First, limiting immigration, villainising people of colour and labelling the establishment media as “enemies of the State”, whilst simultaneously boosting baseless conspiracy theories to further his own agenda has provided the theoretical justification for the movement’s fascist approach to politics.

If we look at the long-term trends of the United States, we can see that despite the solutions being grotesquely racist and unfounded, the grievances continue to be quite legitimate.

The devastations of the Global Financial Crisis are still felt in the United States today and it shows. The U.S. is rife with vast economic inequality, social fragmentation and poor healthcare for tens of millions.

The economic devastation of COVID-19 in the United States and across the world will likely result in a further decline of economic security.

Trump has provided tangible enemies to lay blame for this multidimensional crisis, redirecting the anger of the disenfranchised to a long list including (but not limited to) Mexicans, Muslims, Black Lives Matter, socialists, Democrats, Ilhan Omar or his past favourite, Hillary Clinton.

The movement against fascism, Antifa, has been described by Trump and his followers as a terrorist organisation (despite no actual evidence of terrorism or even a central organisation).

Meanwhile, the Centre for Strategic and International Studies reported that far-Right and White supremacist terrorist attacks in the United States increased dramatically in 2017 (one year after Trump’s Election win) to 53 attacks and another 44 in 2019. Far-Right terrorism has represented a majority of terrorist attacks in the United States since 1994.

Trump has shamelessly embedded his personal brand into this fascist movement, which has unified under a broad and diffuse global umbrella, where he has become an overarching fatherly figure to millions.

The 2019 terrorist attack in New Zealand at two mosques, which killed 49 people, was carried out by an Australian far-Right extremist who specifically referred to Trump as a ‘symbol of renewed White identity and common purpose’.

QAnon, the conspiracy group that believes that Trump is leading a secret war against a global cabal of Satan-worshipping paedophiles, has grown exponentially during the Trump years and Trump has on numerous occasions shared their completely unfounded posts from his Twitter bunker.

QAnon has had an increasing presence across the world, notably here in Australia, especially in relation to the anti-lockdown protests in Melbourne.

QAnon and Trump also have a strong representation in the UK, where Brexiteers have shared a strong affinity for politics and tactics in winning popular support and electoral victories. The QAnon flag was even flown from Camelot Castle in Cornwall, owned by a Trump and Brexit supporter.

A recent survey in the UK found that one in four Britons believe in QAnon-related conspiracy theories.

Germany has the largest QAnon following outside of the United States, but significant support bases can be found far and wide, from Italy to Brazil to New Zealand.

The fascist militia group, the Proud Boys, known for their vigilante street violence against private citizens and Antifa – in a similar vein to the Brownshirts of the Nazi era and Mussolini’s Blackshirts – was, following the hot mess that was the first Presidential Debate, told by Trump to “stand back and stand ready” .

In the lead up to the Election, the FBI warned that extremist militias, including the Proud Boys, could potentially engage in violence and acts of terror with the time between the Election and the 2021 inauguration as a ‘political flashpoint’.

Similarly, far-Right militias have returned to the streets of Berlin while far-Right demonstrations in Germany are littered with flags, t-shirts and banners emblazoned with Trump’s distinctive face.

Trump enjoys support here in Australia from far-Right politicians like George Christensen and Craig Kelly, while our media drips with Trump apologists, most having no qualms platforming far-Right ideologues.

Our own Prime Minister, Scott Morrison, attended a Trump rally and has developed a closeness to Trump unprecedented by any other head of state.

Trump is indeed the global ambassador for Fascism Inc.

After the violence of the Capitol siege, the opportunistic establishment Republicans and Right-wing press that allied with Trump will quickly disavow him. His supporters in the United States and across the world will remain.

Trump has publicly accepted that a transition of power will take place but once his Presidency is over, it is quite apparent Trump Fascism Inc will be taking their show on tour.

This will be Trump at his most unleashed, with no need to pander to the establishment that has now rejected him.

Sadly, he will be welcomed by millions.