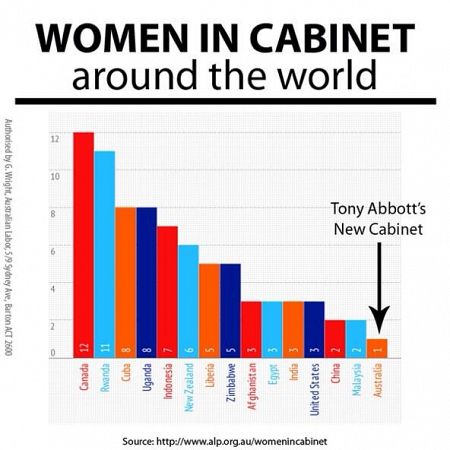 IT SEEMS THAT Tony Abbott and Julie Bishop are taking Australians for mugs: Tony with his "disappointment" he can't have more women  in his cabinet and Julie saying she will only travel business class on her overseas trips..

He said at his press conference he was "disappointed" there was only one woman in his cabinet.

It's your cabinet, mate; you select who will be join it. Why sully yourself by expressing disappointment that the dreadful Sophie Mirabella is not one of the chosen? She is more on the nose than her erstwhile guide and mentor, the disgraceful and disgraced former senator Noel Crichton-Browne, someone no self-respecting Liberal politician would be seen dead with — a fate Mirabella will soon enjoy.

Abbott showed how out of touch with community feeling by endorsing Mirabella in the first place.

All ALP MP's and most Liberals will hope she never gets back into Parliament, but if she does, the welcome home celebrations will more than likely take place in a port-a-loo — but that's a story for another day.

Back to la Bishop.

She has instructed her department not to book her on first class flights when she and her entourage start swanning  around the world.

Now, don't get me wrong.

As Australia's foreign minister she must travel the world stating our cases on a variety  of matters connected to her portfolio, but if she was serious about saving money why not convert the slew of frequent flyer points she accumulated  when as a backbencher?

Come to think of it why doesn't the parliamentary travel office use members' and senators' points for official travel instead of allowing them to keep the entitlements for personal use?

Abbott's team hasn't been sworn in yet, but when it has that will be the time to make an assessment.

Finally, as a former health minister himself, it beggars belief Abbott has handed this important portfolio to the former Queensland policeman, Peter Dutton, who as shadow health minister hardly asked a question to the ALP minister he was shadowing.

Surely Abbott could have found someone else ‒ perhaps a female someone ‒ who could do a much better job? 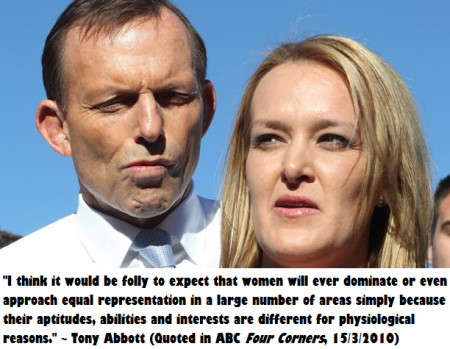