This morning’s Neilsen poll suggests the Abbott Government has had the shortest honeymoon in Australian political history. Bob Ellis comments. 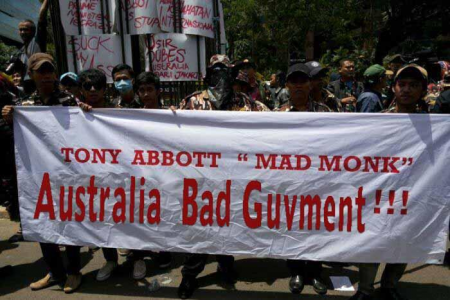 This means the ‘undecideds’ who went warily, uncertainly to Abbott after September 3 are now flocking back to Labor after having had a look at him.

It also means [sigh] that had Shorten and not Rudd replaced Gillard he would have won a September election; or, more handily, one held next Saturday. The ‘faceless man’ tag never fitted him, never stained him, never lamed him, once anyone saw him sharp and lucid and conscienceful on Q&A, and the two and a half million relatives of the Disabled think highly of him — as, in some cases, their saviour — and he was always going to win.

The big thing he had going for him was, well, competence, and a capacity (like Combet, Carr, Clare, Plibersek, Roxon Wong) not to insult the intelligence of the television watcher.

Abbott, who mistook another man’s son for his own, who ran out of the chamber when he didn’t have to, who subjected Mark Riley to ‘the seventy-second stare’, who abused the dying Bernie Banton, who falsely accused Peter Slipper of sexual harassment and Craig Thomson of misspending half a million dollars (it was twenty-seven thousand, and not misspent) and falsely imprisoned Hanson and Ettridge after letting Oldfield found One Nation in his office; and, lately, got us into Cold War with Indonesia needlessly and parted a sick newborn baby from his weeping incarcerated mother without good cause, has shown himself to be incompetent — frequently, vividly, and sometimes inexplicably incompetent — and he will never, never, never, I think, I believe, get an aura of competence back.

His abandoned boat-buy-back wheeze, his failure to apologise to the humiliated Mrs Yuduyono and his proposed annulling of his sister’s marriage add to the impression that he is a klutz; a kook; a spoiled priest; a snickering, leering, lip-smacking enemy of women; or a mad nudist uncle out of A Moody Christmas.

Competent, he is not. And he cannot, in the present age, seem competent hereafter, unless we get into some equivalent of the Cuban Missile Crisis and he performs well in it.

Come to think of it, he is in a kind of Cuban Missile Crisis already — with Yudoyuno’s tweeted fury, the cancelled war exercise, the cancelled refugee-interception partnership, the Textor twitter, the Javan cartoon of him him peeping and wanking (pictured above right), and the looming threat to the meat-on-the-hoof trade which will displease both Barnett and Barnaby. And performing very badly.

It is a pity the election was not on November 30. Even Rudd could have won it easily.

And Shorten have won it in a walk.