Follies and faux pas by the Abbott Government abroad are no longer merely occasions for mockery and mirth — it is now more serious than that. French correspondent Alan Austin reports.

THE FOREIGN AFFAIRS BLUNDERS by the hapless Abbott Government in September bring to forty the number of serious issues that have diminished Australia’s global standing.

Several have given rise to derision, others have provoked sheer bewilderment, but some are now damaging Australia’s safety and security.

The Slate in the USA headlined its piece:

‘The Saudi Arabia of the South Pacific: How Australia became the dirtiest polluter in the developed world.’

Its critique was blunt:

‘In the year since they took office, Prime Minister Tony Abbott and his Liberal-led coalition have already dismantled the country’s key environmental policies. Now they’ve begun systematically ransacking its natural resources. In the process, they’ve transformed Australia from an international innovator on environmental issues into quite possibly the dirtiest country in the developed world.’

This was picked up elsewhere, including Britain’s Daily Mail and the International Business Times.

The judgment is based on three visible reversals: logging Tasmania’s forests, recalcitrance at the recent UN climate summit in New York and the carbon tax/price repeal.

Number 39 was the decision to follow the US into Iraq in yet another attempt to meet violence with violence — and, incidentally, boost the popularity of warmongering ‘leaders’.

The threat this poses to Australia was widely highlighted:

In the UK, The Guardian headlined its report:

‘Isis instructs followers to kill Australians and other disbelievers’

‘ISIS threatens to attack the US, France & Australia’

CNN in the US:

He had a job to do Flying to Cambodia #auspol #scottmorrison #cambodia pic.twitter.com/sYZzmwPEmD

It recounts the case of an incarcerated child suffering untreated toothache, allergies, bed-wetting, stuttering and other symptoms of depression due to separation from her mother.

‘Australia is pursuing draconian measures to deter people without visas from entering the country by boat. In doing so, it is failing in its obligation under international accords to protect refugees fleeing persecution.’

Number 36 was the Budget decision to slash overseas aid from the miserable level promised before the 2013 election – already a reduction of $4.5 billion – by a further $3.1 billion.

The UK’s Daily Mail quoted aid advocate and rock legend Sir Bob Geldof, saying he was dismayed Australia had reduced overseas direct aid (ODA) when it was one of the richest nations in the world.

So let’s briefly recap the earlier 35:

The first 25 offences against Australia’s reputation were committed in Abbott’s first 100 days, recorded here before Christmas:

1. The theft of Timor Leste’s documents.

3. Mishandling the West Irian activists who scaled the wall of Australia’s consulate in Bali.

7. Welching on an agreement with Japan and New Zealand to protect the southern bluefin tuna.

9. Mishandling relations with Indonesia, as analysed here, here and here.

11. The first round of savage aid cuts, with heaviest impact in Australia’s region.

15. Bewildering economic mismanagement: ‘The alarm bells about the Abbott government are ... ringing around the world.’

19. Violating the Refugee Convention by returning refugees to Sri Lanka without proper screening.

20. Boat deaths when mayday broadcasts from a stricken vessel were ignored.

After Christmas followed further deterioration of relations with the region, as documented here:

21. A Customs ship to monitor Japanese whaling promised before the election was not available after.

The next batch arose during Abbott’s dismal January trip to Davos, analysed here:

25. Abbott attacking former PM Kevin Rudd while abroad. This followed a similar earlier blunder in the US last October.

Then, in June, Abbott dragged another chain of catastrophes through Indonesia, France, Canada and the US, as analysed here and here:

26. Receiving yet another summons to Indonesia to kow-tow to the president. Or, as Abbott put it, to “pay my respects and build on the relationship”.

27. Arriving at France’s D-Day commemoration in a German-made car, and then delivering an offensive speech focused on his self-interest.

28. Abbott’s call for an alliance with Canada and others to oppose global climate initiatives.

This was ridiculed in Britain and New Zealand. A scathing Canadian article was headed,

29. Abbott’s breathtaking lies in the US about emissions trading.

32. Abbott’s profound insult to Indigenous people in July, when he claimed Australia before the British arrived was “then unsettled or, um, scarcely settled."

This was reported damagingly in Russia, Portugal, the UK and elsewhere.

33. The High Court’s intervention in the forced return of refugees from Sri Lanka was welcomed worldwide, including in Russia, Canada, Indonesia, Germany,  Austria and Spain.

34. Joe Hockey’s May Budget was greeted widely with dismay, including in France and Britain.

No wonder Tony Abbott is, to quote The Washington Post:

‘… one of the world’s most hated prime ministers.’

So why are Abbott and Bishop getting such kudos at home for foreign affairs ‘successes’?

There are three reasons.

First, the media lie. The Murdoch press particularly assigns ‘reporters’ to travel with the PM and simply fabricate ‘news’ reports.

Secondly, the Government and the media have fomented a sense of danger and insecurity, which serves to make a weak leader appear decisive.

Thirdly, Australia’s diplomats and foreign ministry professionals are competent operatives. Ms Bishop has apparently learned to step back, when abroad, and let them operate.
This is almost certainly why Russia’s Foreign Minister Sergey Lavrov referred to his Australian counterpart as ‘he’ after their first meeting. Apparently, Bishop had moved adroitly aside to allow the professionals to get on with the job.

The more Abbott and Bishop to do this, the safer the country will be.

Forget appearances, what about words & themes? Your PM @TonyAbbottMHR setting the standard. pic.twitter.com/6jjTbGnwmn 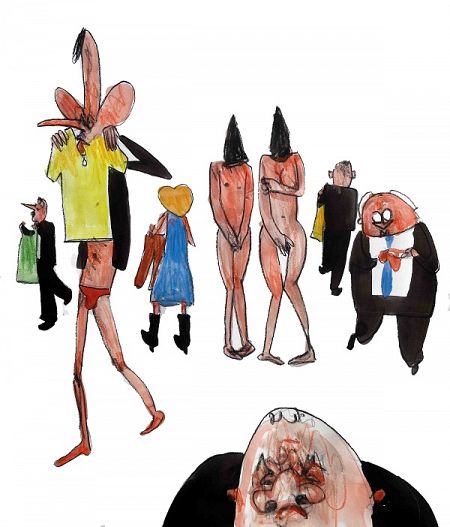