Tony Abbott has broken his campaign promise to spend the first week of his prime ministership with the Yolngu people in Arnhem Land, so News Corp is now pretending he never made it. Managing editor David Donovan reports. 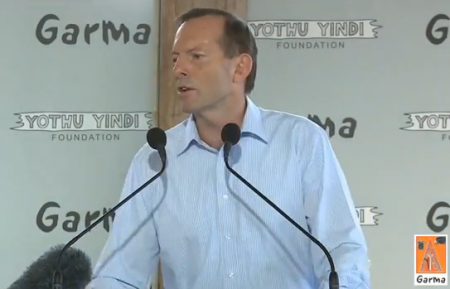 LAST NIGHT (22/9/13), I was quietly sitting at home with my family watching a DVD when I received an email from a bloke called Rex:

'Do I recall Tony Abbott promising during the recent election campaign that he would spend the first week of his term in office in an Aborigine community? Is this a broken promise, or is my memory playing tricks?'

It was an interesting question, because I also recalled hearing about this promise on ABC radio during the election campaign and, indeed, it receiving quite a bit of coverage in the media before the election. It was taken by many to show the vital importance Abbott puts on the issue of Indigenous affairs, something IA has had a significant amount of doubt about, as shown by this story, as well as this one.

As far as I was aware, Abbott had not spent the days since he was sworn in last week in an Indigenous community.

So, while watching the final episode of Breaking Bad (Series One), I sent out the following tweet:

Forgive if I recall incorrectly, but didn't Abbott promise to spend his first week as PM in an Indigenous community?

I was astonished to find that, within a minute of me posting that tweet, the national political editor of News Corporation's Sydney Sunday masthead, the Sunday Telegraph, responding to me directly, denying Abbott had ever made this commitment:

@davrosz @vanbadham no he promised to spend a week a year as PM — samantha maiden (@samanthamaiden) September 22, 2013

I was intrigued by this. I don't follow Maiden and she doesn't follow me. So why was she going into bat for Abbott — and why so precipitously?

Anyway, as I said, I remembered hearing about this promise many times, so I did a quick search on the internet and came up with the ABC story where I recalled first hearing about it:

@samanthamaiden@vanbadham So, you are saying this report on ABC PM is incorrect? http://t.co/G8szkt6ygh

So, I tweeted her an excerpt from the transcript of ABC PM, which stated (in part) the following [IA emphasis]:

He also promised that if the Coalition wins the election he'll spend his first week as prime minister with the Yolngu people in north-east Arnhem Land.

It seemed pretty clear cut to me: either Everingham lied or had it wrong – and no correction had ever been issued by Abbott or the ABC as far as I was aware – or Abbott had made this promise and broken it.

But Maiden still tried to claim there was no reference, even though I had given her one and from a highly credible source, the national broadcaster:

@davrosz @vanbadham Always said he will spend a week every year as PM. Said again at campaign launch. No reference to "first week as PM"

Making me even more suspicious, because in my experience ad hominem attacks generally signify a weak argument, Maiden then decided to question my commitment to Indigenous people:

@davrosz @vanbadham Anyway. How many weeks a year do you spend volunteering in aboriginal communities, may I ask ?

Was I a candidate for prime minister at the last election and I'd forgotten? I have been awfully busy lately. Anyway, my love of our First People is well-known and IA spends a lot of time publishing stories about Indigenous matters.

Never mind that, Samantha went on swinging, calling me a crackpot and an embarrassment:

And that I was somehow out in the community peddling minsinformation:

@ColonelSandersP @davrosz @EnoTheWonderdog @vanbadham It is mindblowing that you would peddle that stuff for that long without checking. — samantha maiden (@samanthamaiden) September 22, 2013

Frankly, this lack of self awareness from a Daily Telegraph employee is what I find embarrassing, but never mind, according to the "fair" Maiden, I had been 'caught out pedalling [sic] bullshit':

@davrosz @EnoTheWonderdog @vanbadham Well, it wasn't maybe ten minutes ago or for months before. you've been caught out pedalling bullshit

@Jsus1 at Garma in August, I was there and heard him say it — Rachel Siewert (@SenatorSiewert) September 13, 2013

And she was helped even less when a document on the Garma website emerged:

[Editors note (15/2/14): This press release now been removed from the Garma website, but here is a screenshop of the relevant part (click on the image to read the press release in full): 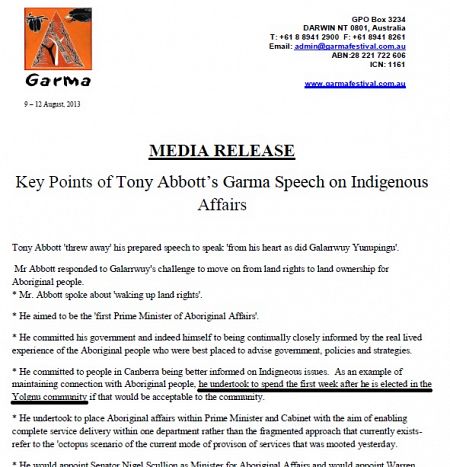 Now, before we go any further in the story, let's stop for a minute to count the people who have, so far, confirmed Abbott made the promise to spend a week in an Indigenous community: there's been the ABC's Sara Everingham, Senator Rachel Siewert and now the Garma festival people — I make that at least three.

Was that enough for Sam Maiden? Nope, not on your nelly!

Here's what she said about the Garma statement:

@davrosz @this_is_cirrus @vanbadham That isn't a transcript. that's a bunch of notes with typos put together after the ABC report ! — samantha maiden (@samanthamaiden) September 22, 2013

With "typos", huh? Hmmm... Is it just me, or is there just a subtle whiff of casual racism there?

According to Sam, the silly Aboriginals were probably just confused:

@this_is_cirrus @davrosz @vanbadham it's quite possible they have misunderstood what was said. the published quote say one week not first — samantha maiden (@samanthamaiden) September 22, 2013

Anyway, as you might expect, a speech made in front of hundreds of people is difficult to stuff back down the memory hole and so, before too long, friendly Aaron Bakota tweeted a video of the entire event.

Here is the exact quote from Abbott as he looked across at local Indigenous leader Galarrwuy Yunupingu:

The crowd cheered and applauded, and no-one there could have taken that as anything other than a commitment by Tony Abbott to spend his first week as prime minister on Yolngu land.

To save you the trouble of tracking through the entire speech, here's the relevant bit:

At this point in the conversation, some saw it as maybe past time for Samantha to finally admit defeat and issue an apology:

Don't be silly! That's not the Limited News way. The Limited way is more about changing your story, deflecting and continuing to attack, attack and, most importantly, attack.

@davrosz he doesn't pledge to spend first week there. he says why shouldn't I if you permit me. — samantha maiden (@samanthamaiden) September 22, 2013

Excuse me while I throw up.

Then the problem somehow became, according to Sam, that I was some sort of 'inner-city hipster':

Which must make me the world's first 42 year-old hipster from Dingo in Central Queensland.

Samantha Maiden has still not apologised. And on the night in question, despite everything that had occurred, she continued questioning my integrity — even strangely criticising my research skills:

For the record, that initial innocent tweet as I watched TV was the first time I had ever mentioned this commitment by Abbott anywhere. It seems that my "research", which was simply engaging with people on Twitter in an open and honest way to find the truth, was infinitely more effective than relying on Samantha Maiden's arrogant assertions, obvious distortions, snarky insults, pathetic smears and, let's face it, outright lies.

My attitude towards Maiden now is best expressed by one of my last tweets to her last night:

@samanthamaiden Go away. I am sick to my stomach reading your words. — David Donovan (@davrosz) September 22, 2013

The question is, why would any journalist set themselves up as a firewall between the public and a lying politician?

Sam calls me a conspiracy theorist – over and over again, in fact – but, you see, something is not really a theory when everyone knows it's true:

@TeddySea I assume it is all about protecting a fellow Murdoch employee. 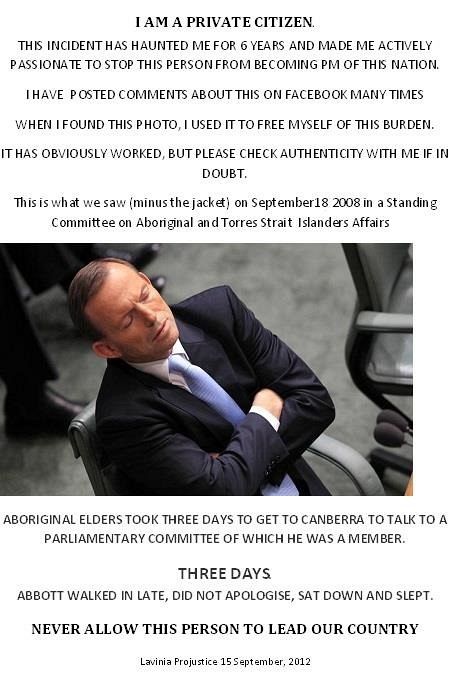