Based on recent history, the Abbott Government's appeals for clemency for Peter Greste are unlikely to succeed, writes Alan Austin, who suggests only a change of government can help the gaoled journalist.

THE BAD NEWS for family and friends of Peter Greste is that history is against a happy outcome.

The Australian journalist employed by Al Jazeera television was sentenced on Monday to seven years gaol. The charges, laid in Egypt’s repressive regime of Abdel Fattah el-Sisi, were of defaming Egypt and having ties to the blacklisted Muslim Brotherhood.

There are stark contrasts in the way foreign affairs are conducted by Australia’s Labor and Coalition Governments. There are dramatic differences in outcomes for citizens in trouble abroad under the two regimes.

It is Peter Greste’s fate to have been arrested soon after diplomatic incompetents took charge in Australia.

In 2003, during the Howard years, Holly Deane-Johns was sentenced to 31 years prison in Thailand for possessing 136 grams of heroin. A large spoonful. Moves for leniency following the manifestly excessive penalty were either not made or not successful until after the Coalition left office.

In December 2007, just days after the change of government, Deane-Johns returned to a women’s prison in Australia. She was released in 2012.

Stephen John Sutton was arrested in Argentina in 2003 on narcotics charges. Despite many mitigating factors, the first offender copped 11 years. Not only did the Howard Government fail to secure a fair trial and outcome, Australia’s Federal Police aided Argentinean authorities in his arrest.

David Hicks was captured by local militia in Afghanistan in 2001 and sold to the U.S. military who confined and tortured him in Guantanamo Bay prison for six years. Despite a claimed special relationship between Australia’s PM John Howard and U.S. president George W Bush, and a compelling case for Hicks’ innocence, the Coalition failed to secure either his release or a fair hearing.

Hicks was relocated to a prison in Australia in April 2007 on condition he plead guilty to trumped-up charges without a trial. He was released in December 2007, immediately after Howard left office.

Mamdouh Habib was arrested in 2001 and sent by extraordinary rendition from Pakistan to Egypt in violation of international law. He was imprisoned and tortured as an enemy combatant at Guantanamo Bay for more than three years by the U.S. military and the CIA. He was eventually released in 2005 without a single charge being laid.

Van Tuong Nguyen was convicted of drug trafficking in Singapore in 2004. He was hanged in 2005 for this, his first offence, aged 25.

After the 2007 change of government, their sentences were commuted in 2008 to life imprisonment.

Teenaged drug mule Scott Rush was sentenced to life imprisonment in Indonesia in February 2006 and then, on appeal, to death in September. His capital sentence was eventually commuted in 2011.

Hundreds of people were killed in attacks against Australians in Indonesia and elsewhere during the Howard years.

Australia’s embassy in Jakarta was bombed in 2004, killing 11 and injuring hundreds. Australians were specifically targeted in nightclub bombings in Indonesia in 2002 that killed 202 people and injured 240. Again, in 2005, another 20 nightclubbers were killed and more than 100 injured.

These attacks ceased or were thwarted after the Coalition left office.

Did the number of Aussies getting into strife with legitimate or illegitimate activities abroad suddenly drop during the Labor years? Of course not.

Did the Labor Government have a 100% success rate in securing freedom or a fair trial for all Australians accused abroad? Not at all.

Did the success rate of behind the scenes negotiations increase substantially during the Labor years? Clearly so.

Critical to the success of diplomatic efforts on behalf of Aussies in strife overseas is having good relations with other countries.

As shown here and here, the Abbott government in its first eight months alienated governments across the globe, including all Muslim nations, on more than 25 different issues.

These include the appalling treatment of innocent Muslim refugees arriving from war-torn countries. There have been several deaths in refugee detention centres, including at least one murder which Australia seems to have no interest in investigating.

'Australia’s treatment of asylum seekers has soured its relations with Indonesia, while also drawing Malaysia and Cambodia into the fray. Furthermore, Australia’s new coalition government has announced spending cuts for aid, foreign affairs and the Australia Network which could affect its long-term presence in the region.'

"I think the Australian Government must be one of the most ignorant governments I've ever seen in the sense, right across the board, on immigration or about anything else, they're totally unwilling to listen to science or logic."

Similar sentiments have been expressed in Canada, the USA, Indonesia, Germany, New Zealand and much of the Asia-Pacific.

Tragically for Peter Greste and other Aussies in need of just treatment abroad, the USA cannot be called upon as readily as was the case under Labor.

Abbott made clear to the world his disdain for President Obama earlier this month when stupidly, openly – and ultimately ineffectually – he called for a coalition of right wing nutjob governments to thwart Obama’s global climate change efforts.

John Kerry’s intervention on Monday on behalf of Peter Greste and his co-accused was heartening. The U.S. Secretary of State contacted Egypt's foreign minister to register his “serious displeasure” at the “chilling, draconian sentences”.

Beyond that, however, why would the USA spend its political capital with Egypt in support of such a foolish ally?

Australia is now isolated. And can expect to be ignored.

Abbott’s made the following appeal to Egypt’s president:

It was indeed immediately rejected by Egypt’s el-Sisi, who responded:

“We must respect judicial rulings and not criticise them even if others do not understand this.”

If the Australian Government eventually succeeds with its plea for leniency for Greste, then it will deserve commendation. 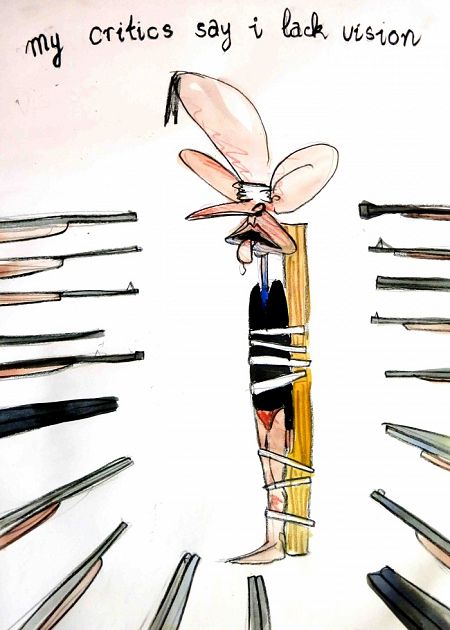