To the extreme with "Hard" Cory Bernardi

When it comes to having the policy ideas and opinions to get you to the top in the modern Liberal Party, says Peter Wicks, no one does it better than Cory Bernardi. 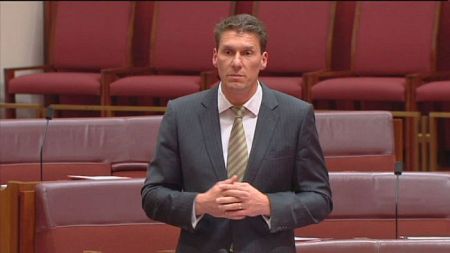 THIS WEEK, the Liberal Party showed its true colours, as South Australia’s Liberal Senate ticket was announced, with Cory Bernardi again in the number one position.

I know many of you will be thinking this is a bad thing, however I disagree.

I think that it is vitally important that the public be made aware of the kind of policy ideas and the opinions and attitudes that will take you to the top in the modern day Liberal Party.

Bernardi spent a lot of time in the U.S. studying the workings of the Tea Party; you may remember them as the right-wing lunatics the Republican party can’t distance themselves enough from these days. These were the party faction that was so far to the right that even Dick Cheney needed binoculars to see them.

It all went south for the Tea Party after their darling, Sarah Palin, ran a television campaign that showed various democrats in gun sights and a social media campaign showing the same. The apparent result of that being the gunning down of 17 people in a Tuscon shopping centre car park in 2011. Of the 17 people gunned down, six were killed, the assassin’s target, then Democrat Congresswoman Gabrielle Giffords was shot in the head but not killed. Giffords was one of those in the campaign pictured in the cross-hairs of a gun sight.

Cory is best known in Australia for his touching comments comparing same-sex marriage to bestiality. These comments were not enough for Tony Abbott – who had earlier promoted him to become his very own parliamentary secretary – to stand him down, but eventually the public disgust at the comments forced Cory into “resigning”. He was not, however, sacked from the Senate or kicked out of the Liberal Party as many were calling for. On the contrary, once the heat had died down, in October, Cory was quietly promoted to temporary Chairman of Committees— earning him a cool $5,700 payrise. Harsh punishment indeed.

It is also interesting to note that Tony Abbott never condemned the statements Bernardi made that caused such offense ― referring to them only as "ill disciplined". Words like that endorse the perception that Tony Abbott shares his closest Senate companions views, but is disciplined enough not to air his extremism in public.

It is not just the gay community – and those who believe that gays and lesbians are humans and should share the same rights as the rest of us – that Cory has utter contempt for. Cory is also fond of those who think that environmental protection is a worthwhile ambition.


“While Earth Hour activists will be left in the dark, Human Achievement Hour participants will be going to the cinema, enjoying a hot meal, driving their car or watching television.”

Cory’s words display for all the Coalitions environmental credentials.

You may have guessed it, but Human Achievement Hour is an anti Earth Hour movement started by Tony Abbott’s handpicked former parliamentary secretary. It encourages people to turn on extra lights during Earth Hour and other absurdly childish behaviour. I wonder if this is part of Abbott's “Direct Action” policy we don't hear much about any more.

In yesterday’s Sydney Morning Herald (11/12//12), Cory pronounced his complete disregard for global warming in response to even more conclusive scientific evidence that has been released.


The Global Carbon Project has released forecasts that the planet could warm by between 4 degrees and 6 degrees by the end of the century and Nature Climate Change on Monday published a study finding that warming is consistent with 1990 scientific forecasts.

I wonder if Cory dances on the beach around the dead sea-life after an oil spill?

I don’t consider myself an environmental activist, I don’t chain myself to trees or anything like that, but I did manage to switch off a couple of lights during Earth Hour. Oddly, though, I managed not to be in the dark because, unlike Cory, I recalled another one of mans discoveries — fire. I lit a candle or two and, indeed, I could have had a hot meal by cooking on the BBQ ― but didn’t as I’d already eaten. I guess what this tells us about Cory is that, not only is he a total knob, but in the event of a blackout he’d be about as useful as a chocolate teapot.

Cory is also known for his embracing of Australia and its multicultural history.

Cory has always displayed his compassion for religious freedom,his anti Islamic stance has shown us the ugly side of prejudice. Not only has he made repeated calls to ban the burqa, but he has even linked Islam to rape ― despite the overwhelming number of rapists in prison in Australia having come from a more traditional Christian upbringing.

One foreigner that Cory does have respect for, though, is Geert Wilders ― the crazy Dutch racist who has had his visa application rejected from many countries, including here and the UK. Geert’s extremist racist views have made him notorious worldwide ― kind of like the KKK meets Hitler and then smokes a crack pipe.

Cory actually invited Geert Wilder to Australia and offered to organise his schedule whilst he was here ― just to spread the love. What a nice guy!

But to be completely fair, Cory Bernardi isn’t the only lover of Geert Wilder’s extremist views, so we shouldn’t judge him too harshly. Anders Breivek, the right-wing lunatic who murdered 77 innocent people, mostly children, by gunning them down and setting off bombs on an island in Norway in 2011, cited Cory’s mate Geert as a huge influence. Nice company, Cory.

As an aside that Cory may find interesting ― Brevik claimed repeatedly that he was a Christian, although this has been downplayed. I wonder if it would have downplayed if he had claimed to be a Muslim?

If these are the kind of views that see extremists like Cory Bernardi rewarded within the Liberal Party, than I for one would like more people to see and hear about it. The more the public are aware of the type of party that threatens to be in power after the election next year the better I say.

It is not just Tony Abbott’s misogyny the public have to fear, nor his inability to stick to one version of the “gospel truth”, we have to worry about the mates that he brings with him and the influence they will wield on the parliament.

It is one thing to tolerate the proponents of racism and hate from those who preach it like Geert Wilder, it is another thing to openly endorse it as Bernardi has.

As people who are opposed to racism at any level, and as people who believe that discrimination in any form is both evil and a breach of human rights, we need to be letting as many people as possible know what these people actually stand for ― and we need to let them know now.

After the next election will be too late.