Tim Wilson clings to his seat – for now

Labor has referred Tim Wilson to the powerful Privileges Committee over his blatant politicking over the Government’s inquiry into Labor’s franking credits policy.

As Dr Martin Hirst reports, the Liberal MP has made a mess but is in no hurry to clean it up.

ON WEDNESDAY this week, the ALP successfully moved to refer Tim Wilson to the Privileges Committee over several apparent breaches of parliamentary procedure committed in his role as Chair of the House of Representatives’ Standing Committee on Economics.

Tim Wilson should resign as chair of the House Economics Committee. He has a clear conflict of interest in the outcome of this inquiry & has abused parliamentary processes & tax payer funds on a blatantly partisan inquiry. https://t.co/u4TKLuhZfT

No good news for Timbo this week

The member for Goldstein, Tim Wilson MP, has been in the news a great deal for the past two weeks or so. Normally, less than three months from an election this would be good news for a humble backbencher. Name recognition is the name of the game and having a high profile can help enormously.

That is, except when it doesn’t. Mr Wilson is probably not going to clip the news from the last fortnight to show his mum, his husband or his distant relatives — like first cousin (once removed) Geoff Wilson.

As has become abundantly clear over the last 14 days, it is this family connection that has led to a swathe of bad publicity for the usually not-at-all publicity-shy Wilson. Now, following days and days of revelations, it all might be coming to a head. 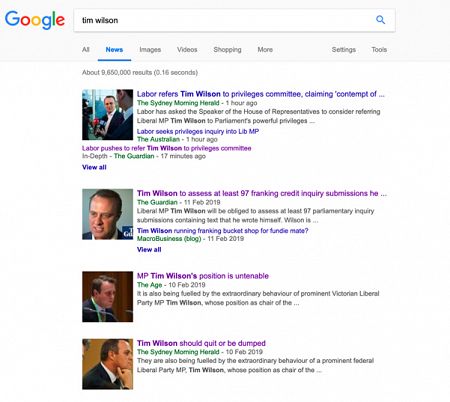 Wilson’s bluff: is it hubris or stupidity?

This story has been building for several weeks now. The Labor Deputy Chair of the inquiry, Matt Thistlethwaite, told IA that Tim Wilson had several opportunities to correct some of his mistakes late in 2018, when committee members started pushing back at some of the egregious over-reaching — like having Liberal Party bunting and flags outside the inquiry venues and arranging for local LNP MPs to be the first witnesses called.

The question is: Why didn’t Wilson rein in the excesses?

Tim Wilson should do the right thing & resign as chair of the House Economics Committee. https://t.co/KuzM772VU9

The inquiry would have still been able to make a finding sympathetic to the Government and the media would have continued to push the false narrative that the ALP policy was a new “tax”. Instead, the whole mess has blown up in their faces and now everybody knows it’s not a new tax, it is fixing a rort that gave an undeserved handout to people who really don’t need it.

It seems incredibly naïve for Wilson to think that he could simply commandeer parliamentary processes for blatantly partisan electioneering. Thankfully, it is all coming unglued in a very public way. After prompting by Twitter, the media is now running hard with the story. From my analysis, it is clear that the bulk of the coverage – even in the Murdoch media – has been negative. Both the Sydney Morning Herald and The Age have published editorials calling on Wilson to resign.

From an editorial in the Sydney Morning Herald:

What all of this coverage points to is that Tim Wilson is not intelligent enough or ethical enough to be given any responsibility in the Parliament. He has behaved like a petulant student politician at every turn and he has not taken any action to correct his mistakes without being caught out, embarrassed and forced into it.

Tim Wilson's 'retirement tax' website doesn't have a privacy policy. So how is he using the data?   (Serious article delves into TimWilsons dark web of deceit and skullduggery)  https://t.co/MHWfIn1PcZ via @ConversationEDU

For example, it was pointed out to Tim Wilson before Christmas that he shouldn’t be using the Parliamentary Coat of Arms on a privately-funded website owned by the Liberal Party and paid for by Liberal Party donors, but he has consistently refused to take it down. Every time he was asked about the issue, Wilson just blurted out contradictory statements about the website being “private”, but that he was entitled to use the Coat of Arms as chair of a parliamentary committee.

This is what he told Kieran Gilbert on Sky News on Monday 11 February:

It’s entirely consistent with the duties of a member of parliament to use the coat of arms as part of our parliamentary duties.”

“It’s a private website, but you can use your coat of arms?”

To which Mr Wilson responded:

He said he had “followed every guideline” and would “not back down”.

By the end of the interview, Tim Wilson had stopped making sense, but he didn’t stop talking.

You fill in Tim Wilson’s website (with Australian Coat of Arms) and then you get an email from Geoff Wilson’s Asset Management Company. A “Deirdre Chambers, What a coincidence” moment.  https://t.co/FAxsmtwB1d

He gave an interview to the SMH in which he made the same nonsensical claim — that he was entitled to use his Parliamentary position to authorise a political and misleadingly designed “private” website.

Wilson has tied himself up in knots trying to defend his use of the Coat of Arms and it was still there late on Wednesday afternoon — after Wilson had been referred to the Privileges Committee by Labor over this and other issues. 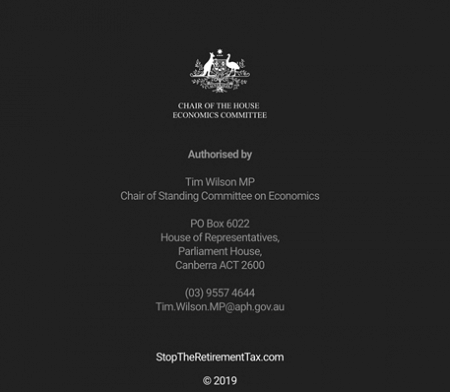 At the heart of Tim Wilson’s many problems is his relationship with supposedly “distant” relative, the stockbroker Geoff Wilson. The MP has been a shareholder in Wilson Asset Management since some time in 2017, yet he claimed in an interview with 2GB’s Ray Hadley that he had only met Geoff Wilson for the first time in March 2018. This is just one of the many misleading statements Tim Wilson has made in an attempt to cover up just how close the two men are.

It is clear from what has been disclosed so far on the public record that the cousins have collaborated – and perhaps conspired – to skew the inquiry in support of their own political ends.

It’s now well known that Wilson used the website to push a petition against the Labor policy that was organised by his relative and it seems that Geoff Wilson may well have been given access to email addresses and other personal information about individuals who used the site to register their attendance at one of the inquiry’s public sessions.

However, there are much bigger issues in play. For example, we know that Wilson Asset Management is one entity funding the Stop The Retirement Tax website, but who else might have made a contribution in return for favourable treatment? The Principal of WAM, Geoff Wilson, was able to connect his business interests to the committee process with the express assistance of Tim Wilson. And we know about this because it’s admitted. Audio of an investor-only phone call in September 2018 reveals Geoff Wilson boasted of discussions with Mr Wilson months before the public hearings began.

“We have to maintain the pressure so we get the result.”

“I was saying it would be nice if one of the hearings could be on a day we are doing a roadshow. Then we could do a little protest, we could have our placards and we could walk down there.”

On 20 November 2018, Wilson Asset Management did hold an Investor Shareholder Presentation (roadshow) in Sydney, 400 metres from the venue organised by Tim Wilson for the House Economics Committee hearing later that morning. Video of the roadshow event shows Geoff Wilson handing out anti-Labor placards and instructing his clients on how to protest against the changes. This might have been a coincidence, but that is actually highly unlikely.

It’s been a rocky week for Tim Wilson. The word “embattled” seems to have been coined with him in mind. At last count, the member for Goldstein is facing at least three inquiries into his handling of the franking credits hearings: the House of Representatives Privileges Committee; an Australian Federal Police probe and a review by the Australian Information Commissioner.

There is no sign of any back-down, resignation or apology from Tim Wilson and for the moment he appears to have the full support of PM Morrison. Wilson has what appears to be a comfortable margin of at least 12 per cent in the blue ribbon seat of Goldstein, but as the recent Victorian State Election demonstrated, it might not be safe enough.

Listen to Martin Hirst’s interview with Labor MP, Matt Thistlethwaite, about the scandal that has dogged Tim Wilson this week.

Tim Wilson declines to say whether Geoff Wilson, chairman of Wilson Asset Management, is funding the stop the tax website, as Labor demands he be sacked as chair of the economic committee https://t.co/657bnzGciN #auspol