Think for Yourself: The War on Drugs

With the ongoing media hype around the so-called Ice Epidemic, critical thinker John Turnbull takes a look at the War on Drugs and wonders if there could be a better way of approaching the problem.

BASED ON POPULAR ESTIMATES, the War on Drugs has cost over $1 trillion dollars since then U.S. President Richard Milhouse Nixon made things official in 1971 (the real war began almost 40 years earlier).

Whether you agree with drug prohibition or not, this is a staggering figure, considering the prevalence of illegal substances in today’s society.

The 2013 Australian Government Drug and Alcohol survey reflected that 42%of Australians over the age of 14 had used illicit drugs at some time and almost 3 million people had done so in the previous 12 months. By all objective measures, then, the war on drugs has failed.

When the war on drugs was first declared, there was one major enemy — marijuana.

Introduced to the U.S. by migrant workers from Mexico, pot was seen as subversive and dangerous by the conservative elite, who enjoyed gin and a spot of medicinal cocaine.

Enter Harry J. Anslinger, a former prohibition agent frustrated by the softening of alcohol laws. Anslinger worked his way up the ranks of the Republican Party and was appointed Commissioner of the newly created Federal Bureau of Narcotics in 1930. Anslinger orchestrated a nationwide scare campaign about the dangers of the increasingly popular weed, including the cult classic Reefer Madness.

President Nixon made the War on Drugs law in June 1971, pushing through legislation introducing measures including no-knock warrants (responsible for many accidental deaths of suspects, police officers and completely innocent people) and insidious mandatory minimum sentencing laws that led to scores of low level users being sentenced to significant time in gaol.

Before we go any further, it is worth recapping on the relative dangers of both legal and illegal drugs. The best guide to this that I’ve seen is David Nutt’s harm index. For those who don’t remember him, Nutt was appointed as the chairman of the Advisory Council on the Misuse of Drugs in 2008 by British PM Tony Blair.

Repeatedly clashing with the government on their approach to drug policy, Nutt encouraged a reclassification of drugs based on actual evidence of the harm they cause.

In 2009, Nutt gave a lecture to the Centre for Crime and Justice Studies that was reproduced as a pamphlet and widely distributed.

This pamphlet included the harm index, attempting to rank harmful substances based on the harm they do to both the user and to others: 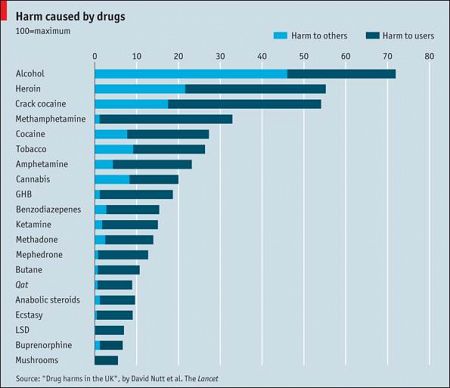 As you can see, the drug that causes the most harm to both society and individuals is alcohol.

Heavily advertised, 100% legal, highly regulated and stiffly taxed, the demon drink is responsible for more misery than meth, cannabis and GHB combined — yet only token efforts have been made to increase alcohol regulation.

Somewhat unsurprisingly, Nutt was fired from his position as ‘Blair’s Drug Tsar’.

A number of studies have been conducted into the relationship between drug abuse and mental illness.

While some studies suggest a causal relationship – implying drug use can cause or increase the likelihood of mental illness – critics of these studies suggest that they do not take into account the arrow of causality — that is, are people becoming mentally ill through drug abuse, or are they addressing existing mental health issues via self-medication?

The mental health system in Australia is in dire straits, grossly underfunded and poorly managed.

Seriously mentally ill people are being pushed back into communities with little consideration and even less support, which is a recipe for disaster. Self-medicating with illegal drugs is often easier than getting an appointment with a bulk-billing doctor and will continue to be a major issue until major changes are made to the way that mental health is approached in Australia.

Much like the co-called 'Obesity Epidemic' of the late 1990s, the 'Ice Epidemic' identifies a real problem, but then buries it under mountains of hyperbole.

Ice is a purified form of crystal methamphetamine, known in the past by street names like 'speed' and 'crank'.

First synthesised back in 1893, meth was used by British, German, Japanese and American governments during WWII to keep soldiers alert (not just the Nazis as some revisionist historians would have you believe). For those that need a more current reference, ice is what Walt and Jesse cook in Breaking Bad.

The problem of Ice addiction (particularly in rural areas) also isn’t a new one.

Offbeat documentarian Louis Theroux made the special The City Addicted to Crystal Meth in Fresno, California back in 2009.

When I tried to find out how many people die each year from ice, solid data was very difficult to find. With the media fascination around the drug at fever pitch, many would think that Ice addicts are dropping like flies — but there really doesn’t seem to be any data to support this.

The National Coronial Information Service provides a fact sheet on opioid deaths (which remained relatively stable during the sample period 2007-2011) and there was a research paper in 2008 from the National Drug and Alcohol Research Centre, which reported:

The aforementioned Drug and Alcohol survey reflects that methamphetamine use showed now significant trends from 2010 to 2013.

The social impact of the War on Drugs

The ABS reports that around 12% of the Australian prison population is incarcerated for drug offences, which translates to around 3,700 people. Many of these people (particularly Indigenous Australians) have been locked up for possession rather than intent to distribute.

Admittedly 12% of our prison population is low compared to U.S. statistics — 20% of inmates in state prisons and a staggering 51% in federal prisons due to drug offences. The rigorous enforcement of the War on Drugs (and resulting budget increases it provides for local police departments) has led to a fourfold increase in the prison population since 1980, to a current level of 2.4 million people.

The heartbreaking death of schoolgirl Georgina Bartter highlights an issue that has existed for as long as drugs have existed — you don’t know what is in the pill you’re taking.

If recreational drugs fell under the same level of scrutiny as prescription or even over-the-counter medications, people would know exactly what they were taking and the risk of overdose would be significantly reduced.

Of course, one way to achieve this would be to legalise and tax less harmful drugs, based on a rationally considered harm index and to regulate their sale to informed and consenting adults. It seems unlikely that any Australian government would take that leap in the current political climate, but who knows what will happen in 50 or 100 years?

No matter what the risk, there will always be people who want to take drugs.

Some people take drugs to escape from unhappy lives, some do it to alter their perceptions of the world. Some people do it to enhance their self-confidence and others just want to have a good time. Are 42% of Australians really criminals?

Back in the late 1990s, the Dutch Government introduced laws to allow for ‘drug testers’ that people could use prior to big events — the idea being that people could have a tiny sample of their pill or powder tested to see what they were actually taking. Similar services exist in Portugal, Spain, Belgium, Austria, Switzerland and Columbia, which has raised the level of service to actually test on ground at raves and festivals.

Health experts are fond of the mantra that ‘you never know what is in the pill you are taking’, but free or cheaply available testing takes ameliorates this issue and potentially gives medical practitioners a head start on treatment options. Governments know from both history and current behaviour that their citizens are going to take drugs — so it seems irresponsible to spend more time and effort on locking them up than keeping them alive.

There are no easy answers to the problems posed by illegal drugs in Australia and around the world.

Drug addiction can ruin lives and destroy families. Drug use by teens can impair cognitive development and the weight of evidence suggests that use of certain drugs may be harmful to your medical health, particularly if you have any underlying conditions.

By the same token, locking people up for what is essentially a personal life choice – poor as that choice may be – seems draconian and shortsighted.

If we can educate people on the potential harms of illegal drugs, provide better treatment programs for those who want to stop using and most importantly fix the mental health system, we will be on the road to solving the drug problem.

We are not winning the war. Think for yourself.