Confused about politician’s entitlements? Not sure whether to claim that private helicopter trip to Geelong? Siobhan Simper has written a guide to parliamentary entitlements to clear the air.

ANOTHER DAY, another politician caught with their snout in the trough.

If it isn’t a minister impulse buying an $800,000 apartment on a work trip to the Gold Coast (and let’s face it, we’ve all been there), it’s a pollie using his chauffeur-driven government car to escort his dogs to and from Melbourne. There has been so much confusion among politicians as to what their parliamentary entitlements actually entail, I thought I’d share a handy guide to entitlements to set the record straight.

Are you sick and tired of having to pay for personal expenses yourself? Frustrated because your current place of work will not fund a private helicopter for unrelated travel? Well we’ve got the system for you. Parliamentary entitlements can deliver all this — and more! Just follow our guide and you’ll be laughing all the way to the bank/friend’s wedding/helicopter landing pad.

1. Too Much is Never Enough

When it comes to parliamentary entitlements, more is, well ... more. The system is in place for your personal gain, so don’t be shy when it comes to requesting what you really want need. Why stick to a paltry, $7,000 bookshelf, when you can have one custom built for your office at a mere twice the cost? Don’t risk the dangerous 80km route to Geelong by road, when a helicopter is waiting to escort you to your golf club function. The only limit is your imagination.

Don’t think that parliamentary entitlements are just for you. Here at Parliamentary Entitlements Inc, we encourage a holistic approach to entitlements, whereby politicians can spend quality time with their families at the taxpayer’s expense. Don’t hesitate to bring your partner, friends or dogs to your next personal social event. Whether it be a wedding, sports event or private dinner with a party sponsor, we encourage you to use the occasion (and your entitlements) to have some much needed down time with your loved ones.

Work related in that NAB gives Him tickets to AFL final & he agrees not to support Banking Royal Commission. https://t.co/p0mJV0yfb6 #auspol

So you’ve been caught out! Uh ... we mean, unfairly slandered for using your entitlements exactly as they were intended. Don’t worry! The media is a fickle beast and will soon move on to the next scandal. Just use the magic words, “in accordance with parliamentary guidelines” and this will all blow over soon. Besides, shouldn’t the media be doing some proper reporting, like uncritically reprinting government press releases?

The time has come. Your party leader has come to you for The Talk. Unfortunately, in this system, there is a minimum mandatory loss, or ritual sacrifice, if you will. At least one minister per party must be stood down every year, to make an example of and give the illusion that something is actually being done about parliamentary entitlements. Relax, you will soon move on to a plum, private sector position, which you will find is far more rewarding than government work.

If there is a mere whiff of a federal ICAC, or legislation to curtail parliamentary entitlements, the protocol is clear. Hold a press release about terrorists, dole bludgers, or those pesky refugees trying to worm their way into a better life — anything that is the equivalent of shouting “LOOK OVER THERE!” while you sneak off stage is acceptable. The next step entails a mandatory meeting with your ministers, during which you all laugh maniacally while sipping champagne and/or puffing on Cuban cigars.

6. Exceptions to the rule

If you happen to be reading this and are in fact not a government minister, but a disability pensioner, someone out of work, or a student: if Centrelink contacts you, demanding payment of a non-existent debt, congratulations! You now owe the government $10,000.

Siobhan Simper is a disability blogger living on the South West Coast. You can read more by Siobhan on chronicallysiobhan.com. 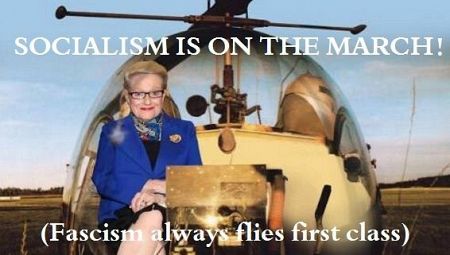 My new thingiewhatsit: 'Sussan Ley resigns: Socialism is on the march!' https://t.co/mGM8YCYPT2 @IndependentAus

For a truly independent Australia. Subscribe to IA for just $5.

24 September 2017, 11:00am After the resignation of two prominent footballers, it seems the AFL has learnt ...
Join the conversation
comments powered by Disqus
News updates