A coastal town has been divided over the decision to allow commercial horse training in a protected coastal reserve.

WARRNAMBOOL is a small coastal town at the end of the Great Ocean Road, four hours south west of Melbourne.

It is best known for its fairy penguin-protecting Maremma Sheepdogs, such as Oddball, immortalised in a movie of the same name, whales during winter and unspoiled beaches.

As of January 7, those beaches have become another training ground for commercial racehorses.

Commercial horse training will return to Levy’s Beach, after the planning minister intervened in the controversial decision and amended the law. The practise was previously found to be illegal under Warrnambool city’s planning scheme. Details @9NewsWesternVIC pic.twitter.com/bRsDNrVkyH

This decision has been some years in the making. The area first came to prominence in 2015 when trainer Darren Weir attributed the success of his Melbourne Cup-winning horse, Prince of Penzance, to its training on Warrnambool’s Levy’s Beach. Following Weir’s success, racehorse training on the beach increased by 300 per cent, leading to a years-long tussle over the rights to the area.

Part of the protected Belfast Coastal Reserve on Levy’s Beach is home to several endangered species such as the hooded plover, which nests in its dunes. It is also of "outstanding cultural heritage value" due to the number of shell middens in the area — important Indigenous sites that often contain historical artefacts, such as stone tools. There is evidence the Traditional Owners of Maar Nation have been caretakers of the land for 40,000 to 80,000 years. 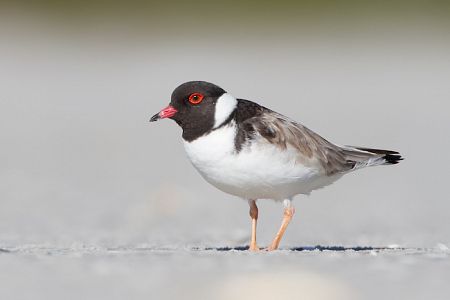 It is because of its environmental fragility and cultural significance that Levy’s Beach is such a contentious place to propose commercial horse training. In October 2018, Warrnambool City Council (WCC) attempted to resolve the matter by voting to allow commercial racehorse training on Levy’s Beach for five years, provided the Warrnambool Racing Club contributed $400,000 towards the construction of a new car park.

The Council’s verdict lasted just days before it was revealed that not only was commercial training illegal on the beach due to local planning laws, but CEO Bruce Anson had received legal advice to this effect more than a month prior to the vote. For unknown reasons, it was left to volunteer conservation organisation Belfast Coastal Reserve Action Group to inform councillors of the illegality of their decision.

Veteran environmentalist Bob Brown is calling on candidates in the state election to pledge not to legalise horse training on Levy’s Beach. pic.twitter.com/bd9JWhG4Dy

After the Victorian State Election, Planning Minister Richard Wynne spared no time in writing a letter to WCC, urging them to allow racehorse training on the beaches upon request of the racing industry. Council responded by holding an emergency meeting on the Friday evening before Christmas, their last working day of the year. If the Council’s plan was to avoid notice, it failed: so many turned up to the meeting that it had to be moved to the theatre.

Despite the strong presence of protestors in the crowd, the Council voted 6-1 for the proposal to allow 160 commercial racehorses a day on a fragile 1 kilometre strip of Levy’s Beach.

Things have always been done differently in Warrnambool and the racing industry runs deep in its blood.

When questioned by The Age in 2014 about the potential conflict of interest of Federal MP Dan Tehan, State Member, (then Premier) Dennis Napthine and local businessman Colin McKenna owning a racehorse together, after the Napthine Government-awarded McKenna’s abattoir a $1.5 million grant, CEO Bruce Anson replied:

“In Warrnambool, that’s what we do.”

Perhaps we do? You won’t find many local council meetings where councillors opine on the benefits of the racing industry, with one councillor describing it as “almost a cornerstone of our city”. Others spoke of “high revenue”, the “trickle-down effect” and their support for the racing industry.

As a lifelong resident of Warrnambool, I always thought the cornerstone of our town was our natural environment, the rugged beaches and ocean that surrounds us at every turn, the native wildlife and coastal scrub. You won't find many tourists say they come to town to watch horses train on the dunes.

Scarce mention was made of Traditional Owners, despite their desire to see research and cultural activities resume in the area. Country has a meaning to the Eastern Maar people that goes far deeper than just transient “revenue”, and Levy’s Beach has a cultural history that long outdates the claims of the racing industry, council and government. Whose land is it to sell off anyway?

Other questions – regarding Minister Wynne’s direct intervention in the matter, CEO Anson’s neglect to inform the Council of the legality of their position and Council’s rejection of planning groups’ advice that allowing commercial racehorses on beaches would set a “dangerous precedent” – remain unanswered. One councillor commented at last year’s meeting,“the horse racing industry is enormous”. I can’t disagree with that.

Protests will continue here, as they always have. There is a strong core group of Warrnambool locals who will defend their beloved beaches to the end. I am one of them. There is something stirring about our natural landscape that inspires deep loyalty.

But I fear the power of the racing industry is too great and they will crush any opposition, just as the dunes and wildlife within are crushed under a horses hooves.

Siobhan Simper is a psychology graduate and disability blogger living on the Victorian South West Coast. You can read more from here at chronicallysiobhan.com.

24 September 2017, 11:00am After the resignation of two prominent footballers, it seems the AFL has learnt ...
Join the conversation
comments powered by Disqus
News updates