The unspoken crimes of the ASX — Part 4

FOR THOSE WHO HAVE NOT READ the previous three articles, I research and write about collusion by an exclusive network who manipulate stock prices on the Australian Securities Exchange (ASX).  Essentially it amounts to wealth stripping. All of the wealth that has poured into the sharemarket since the GFC, much of it involving superannuation flows from Australian workers,  has been taken out by wealth stripping activities. After all, the Australian All Ordinaries index is still below the old 2007 pre-GFC highs, yet other markets such as Wall Street and NASDAQ are multiples of their old pre-GFC peaks.

Wealth stripping makes it hard for everyone, not just the shareholders of targeted companies. It results in losses for shareholders and so the government loses out on taxes. Less tax because share investments are forced into losses, not profits, means higher taxes and higher charges for services for ordinary Australians generally. If not higher charges for services then fewer services as the government is forced to reduce its expenditure and commitments. The entities who are on the winning side of takeovers are also adept at minimising their taxation obligations, so the government loses again. It is a vicious cycle.

Wealth stripping activities in the share market also result in loss of ownership over sovereign assets. Where is the public benefit in that? We are an easy touch and the rest of the world knows it and takes advantage of us — to help matters along, they have our politicians in their pocket.

Weak politicians from both sides are caught up in this. You need a leader with moral values to go against an elite network which is so powerful that it is able to manipulate stock prices to its desire every single day. Former ASIC Chairman Greg Medcraft was so right when he referred to Australia being a paradise for white collar crime.  Yet, ironically, he wasn’t even referring to the share market where the majority of wealth stripping takes place. And it takes place under everyone’s gaze with very few any the wiser. This elite network, also known as the Big End of town, is all-powerful. Right now, if this network wanted to send the share price of Telstra down 10%, it could and would.

Myer is one of the most manipulated stocks on the ASX at the moment. It has been targeted either for a predatory takeover or a forced administration. I have been watching the manipulation of Myer and waiting for the predictable "This company is heading towards bankruptcy article" which always seems to be written about companies which are targeted by the manipulators". I even guessed the journalist before I read it. It was a journalist by the name of Joe Aston. Aston is the master at putting out negative news stories like this. It doesn’t even have to be accurate, it just has to give the manipulators the excuse they need to make a stock plummet. And that is achieved by applying aggressive settings to their algorithmic trading programs.

Shame on you #ASX, you are facilitate this bot action and manipulation...#ASX are you blind or stupid, can't see this sort of manipulation.
How many shares like #AVZ has been damaged because you let some people do that.👎 pic.twitter.com/ZbafjxIjqz

The title of Aston’s article was ‘Myer sales continue to collapse’ and in the first line it’s said that Myer is at death's door. He went on to say that Myer's underlying profit had declined 86%. It was enough to send Myer into a trading halt. The Myer board issued an announcement which, in my humble opinion as someone who has been following Myer for years, was positive. Although revenue has decreased and they made a loss, the loss was less than the same quarter last year and they had even paid off some of their debt. It should have seen an improvement in share price. Instead, the manipulators used Aston’s article as an excuse to make the share price crash in the opening auction — and it crashed 13%.

Funnily though, if you read that same article now there is a new paragraph at the bottom:

The original version of this article said that Myer's underlying profit had declined by $34.5 million, or 86 per cent. This has been corrected and we apologise for the error.

The manipulators don’t let that error stop them from manipulating Myer's share price down.

Aston is amazing in his support of those who are forcing share prices down. In a column by Jessica Irvine suggesting that quite a lot of the rich were cheats, Aston responded saying it was the sort of thing that was ‘levelled at Jews in the town halls of Munich and Nuremberg in the 1930s’. If you look at the price manipulators Aston supports with his articles, they are not playing by the rules at all. The business of making money no longer relies on engaging in productive enterprise. Why bother making the effort to do that when it is far easier to strip it from others? And the system is set up to allow it. 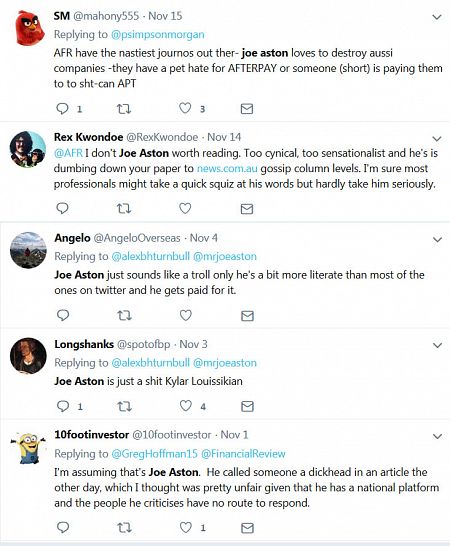 I’m not the only one to realise the role that Aston plays. Gerry Harvey called for Aston to be stripped and flogged after Aston consistently put out negative articles about Harvey Norman to aid and abet the short sellers. NextDC founder, Bevan Slattery, said Aston’s negative article about his company was “seen by many as a possible sock puppet for market manipulators”. It's unbelievable that his articles continue to be disseminated without any major criticism of his integrity.

One politician deserves to be singled out as someone who stood up and said “enough is enough”. That politician was Andrew Leigh, who wrote an article for the Sydney Morning Herald titled ‘The five faceless investors who own much of Australia’s largest companies’. The article was about HSBC, JP Morgan, Citigroup, National and BNP and was slammed by a journalist with such venom and abuse that it could only have been Joe Aston. At last there was a politician saying there is something wrong with the way the stockmarket is manipulated, and there was Joe to knock him down.

If you think there isn’t enough competition between the big four banks, the big three power companies, the big two airlines, the big two supermarkets and in a lot of other industries, - and who wouldn't - Andrew Leigh makes an excellent case. https://t.co/BuVfWaHaDg

Leigh did make a mistake in thinking these companies such as HSBC were doing all the manipulating, but I made the same mistake for a long time and he was at least half correct. To identify the exact perpetrators and to gather evidence that will stand up in court is near impossible unless you have the investigative power of the regulator. And therein in lies another major problem — ASIC has shown to be inept over and over. Again, it’s all designed to be this way.

So after four articles on this subject, what would I say is the underlying cause of all this corruption on the stock market and how can it be fixed?

Firstly, there are several deep-seated problems. They include flawed, unfair systems, extensive camouflage of all critical aspects of the market operations and regulatory capture. On top of that, there is control over the media by the establishment which produces “spin” that supports all of the illegal behaviours and attacks anyone who speaks out.

Secondly, reading this article, making yourself aware and supporting independent media like IA, you are lighting a candle to combat that darkness of the mainstream media. Everything I have talked about in these articles I have presented to many journalists from the mainstream media and none of them will publish it. They prefer to deal in fake news.

Ben Pauley obtained a degree in Natural Resource Management from the University of WA before going to work for three years in the WA prison service. He left that job to pursue a career investing in the stock market. You can contact him at devinechanges2018@gmail.com

ASIC is owned by the Liberal Party and the Banks. ASIC is supposed to regulate Corporations Law in respect of the ASX, but they dont give a fuck, and are easy enough to buy off! The federal police are in pixieland, and dont even know when federal crimes occur!