One of the greatest computer prodigies of this generation has died at a tragically young age; was he hounded to death, asks John Turnbull. 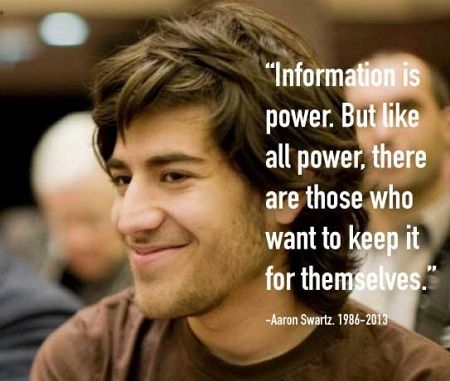 YOU MAY NOT have heard of Aaron Swartz, but he was a very important human being; now he is gone, and the mainstream media seems to have forgotten him.

Aaron Swartz was a geek. He has been called one of the greatest computer prodigies of his generation. When he was 14, he contributed code to an early version of RSS, the web feed tool used to update most blogs and aggregate news sites. A few years later, he founded a company called Infogami, which later merged with a startup called Reddit and became one of the most popular content hubs on the net.

Swartz also co-founded Demand Progress, an online action group formed to pressure US congress on issues pertaining to the digital realm. It was in this capacity where Swartz came into conflict with SOPA, the Stop Online Piracy Act. A strong supporter of Open Access, Swartz felt that information should be available freely to everyone.

It was probably around this time that Swartz first got himself noticed by the US government as a troublemaker.  This attention increased significantly in 2008 when Swartz downloaded and released around 20 per cent of the Public Access to Court Electronic Records (PACER) database. Up until this point PACER had been charging 8 cents a page to release the information, despite the fact that it was not covered by copyright.  As Swartz uploaded approximately 18 million documents, that’s a lot of lost revenue.

An investigation into Swartz actions was launched by the FBI, but no charges were laid. This time.

Two years later, Swartz used his position as a faculty member at Harvard University to download around 4 million scientific research articles from JSTOR. He did this partially from a network wiring closet at MIT (the Massachusetts Institute of Technology) and partially from his office at Harvard.

It’s important to note at this point at Aaron Swartz was entitled to download articles from JSTOR, as Harvard University paid the exorbitant fees that JSTOR charge for access to these articles based on publically funded research.

In July of 2011, Swartz was indicted by a grand jury on charges of wire fraud, computer fraud, unlawfully obtaining information from a protected computer and recklessly damaging a protected computer. He faced a possible sentence of 35 years in prison and a $1 million fine.  The case was led by US Attorney Carmen Ortiz, who used Swartz as a guinea pig to see how far the Computer Fraud and Abuse act could be pushed.

JSTOR publically announced that they were not interested in the legal action, and introduced a program to make more articles available to the public at no charge. MIT made no comment, but tacitly supported the government case.

Swartz downloaded articles that he was legally entitled to. He never disseminated them publically or posted them to any website. He believed that the information contained in those scientific articles was better freely available to the world, not just those who worked in ivory tower institutions.  He was 25 years old and facing charges that might have put him behind bars until he was 60.

Aaron Swartz also suffered from depression.  There is no doubt that this depression contributed to his decision to take his own life. On January 11th 2013, Aaron’s girlfriend found him hanging in his Brooklyn apartment.

No suicide note was found.