Tony Abbott's hyper masculinity blueprint will not save us from danger. It is the danger, warns Lyn Bender.

LOOKING INCREASINGLY confused and anxious on our screens, Tony Abbott and his government cling to the cult of hyper masculinity with its inflated stereotypical macho mode.

Hyper masculinity has been identified as a disorder in the DSM IV. It venerates toughness, and domination, eschews compassion and scapegoats and mistreats the vulnerable.

We the Australian citizens are, metaphorically speaking, in the very unsexy, Abbott red room of pain, of dominance submission and fear. But this is not just a bad movie based on a pulp novel: This is Australia in 2015.

In hyper masculine mode Tony Abbott declares that he

'will not succumb to the cries of human rights lawyers.'

To be moved is to be weak. Compassion is not in the lexicon. Abbott does not negotiate. He toughs it out, lies and cheats but always seeks to appear macho. The first budget would punish and discipline the weak and reward the strong. The age of personal responsibility was here and the underclass must pull themselves up by their bootstraps.

In keeping with this, the case of the starving refugee has been closed.

Recently the story leaked out that Saeed Hassanloo was hunger striking himself to death. This was not a good look even for the government that takes pride in stopping at nothing to stop the boats. It boasts that is has “stopped the boats”, but we know that even this is untrue as fifteen boats carrying 429 asylum seekers have been turned back, as reported by Guardian Australia.

The Abbott government has purchased Vietnamese fishing boats to send back refugees coming to Australia on boats that haven’t stopped.

It was at the eleventh hour, when Saeed Hassanloo was on the brink of death, that Peter Dutton announced on ABC Radio National, that Saeed was taking fluids and sustenance. Peter Dutton was on message. I will not have my arm twisted. We will be strong — against the millions who could invade us. The Abbott Government solution is to send them back to danger.

Julie Bishop is heading for Iran – the country Saeed and others have fled – to lobby Iran to take back hundreds of “failed asylum seekers”.

Meanwhile, Tony Abbott diverted attention and declared “war” on the drug ice — not on cruelty or the melting of polar ice. Now the tax payers were urged to pay attention to the scourge of ice, not ISIS. He has falsely claimed it to be an epidemic. This is today’s scourge and the big new threat to Australian families. 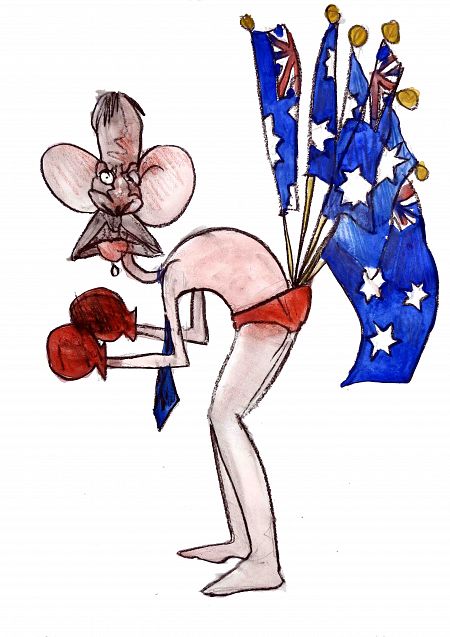 This macho cult promotes callous disregard for suffering. Or as one Christmas Island guard unguardedly wrote on Facebook of Saeed, “let him suffer”.

It has been revealed that the Abbott Government has known for months about the rapes of children in detention and done nothing to protect them.

These bizarre, heartless and seemingly inexplicable responses, can be explained as the scourge of a cult: the Abbott Cult of the Macho. It is the institutionalisation of extreme machismo.

Tony Abbott has lost the swagger of his early heady days as cult leader. His stance is defeated but enraged. His stare is often anxious and uncomprehending; his speech sometimes confused and delusional. A good example of this is when Abbott accused the opposition leader of being Joseph Goebbels, the infamous Reich Minister of propaganda, under Hitler.

So what are the characteristics of the Abbott macho cult?

Say as little as possible when asked to explain actions. However, when you do speak, assert your own view as right. Deny all accusations, stonewall or create a diversion. Always appear invulnerable. Do not negotiate. Express anger and outrage when contradicted or criticised. Use language that excludes, for example, “taxpayers” rather than citizens.

Deplore vulnerability, as a weakness. Show admiration for the rich and some despots or tyrants. Admire the powerful. Do not advocate for the rights of others, except for those with whom you identify.

Express anger and outrage. Empathy for other’s suffering is a weakness that you can exploit. It is not a worthy attribute. Mask vulnerability. Contain emotions other than rage. Don’t be a “girlie man”. Shout down your opponents. Shut down any “soft” emotions.

Support a misogynistic world-view. Keep women in the background and focus on their domestic duties and concerns.

Denigrate and mock women especially those who are seen as powerful or a threat. Rarely appoint them to positions of power. Devalue and undermine their voices, even if they are highly esteemed. For example, Professor Gillian Triggs, the Human Rights Commissioner.

Look strong and fearless. Train with the troops, and show that you are a strong physical specimen. To show dominance, be pictured as often as possible, flanked by many as eight Australian flags, army chiefs and the Federal Police. Intimating a militant but denied form of homoeroticism, Abbott positions himself as a warrior sending troops into the battle zone. Exercising with the troops, he declared:

“If I can’t fight with you, I can sweat with you.”

Use harsh unyielding language. Never admit shortcomings or express regret. Saying sorry is for losers. Refer to “the incompetent former Government” to emphasize that you are the winner. Use the words “tough” and “hard” to justify what others call unfair or cruel. Use the word “soft” as an insult. Call cries of despair emotional blackmail, to which you will not capitulate. Be bold in denial.

Use forceful words such as clamp down. Use military terms to show might as in “Operation Sovereign Borders” Justify lack of transparency as security or as “on water matters” Make a lot of “vows”  to fight on.

Collaboration is effeminate. No deals is the only deal. My way or the highway is the only way. Confront or bully or shirtfront. Emphasize this by repeating that you will build roads and highways. Destroy the achievements of foes. This shows that you are ruthless, fierce and will also distract from your own shortcomings. This makes you the victor.

Enlarge or fabricate external threats. Use generalized assertions that cannot be substantiated.

The terrorist threat is rising,

The threat is worsening,

A debt and deficit disaster.

The solution? Adhere to the macho leader.

A fearful populace will accept unpalatable measures such as the meta data laws.

Manipulated fear makes people reactive rather than reflective. It softens them for “strong” measures and for the surrender of powers to the leader. It contributes to the

Marginalize blame and vilify groups. In Abbott’s cult, the scapegoats are Muslims refugees and indigenous people, whose history and right to community he denies.

This hyper masculinity blueprint will not help us with the challenges that we face.

It will not save us from danger. It is the danger.

John Graham's original cartoons are available for sale from the IA store. 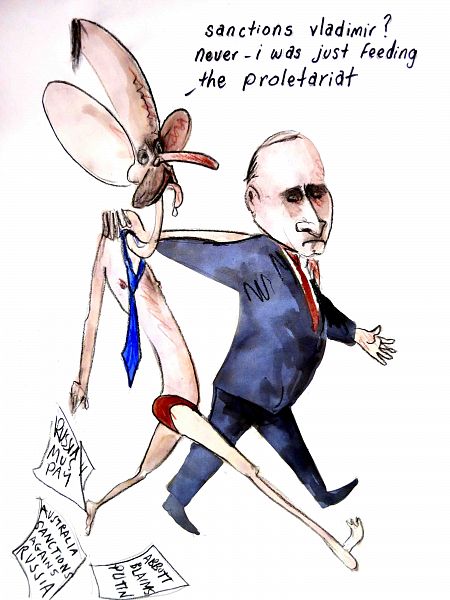