The NSW premier’s resignation for lying to the corruption commission sharpens the focus of this series. Alan Austin looks at the record breaking dishonesty of Australia's PM.

A CONCEPT TO EMERGE from the week’s extraordinary events triggered by a certain bottle of wine is that lies can be a bad thing.

Well, who would have thought?

There appear to be two confusions over lies in Australian political discourse.

The first is over definitions. Refer article one.

The second is the oft-heard “all parties are the same; all politicians are liars”.

Our definition of a lie is: a knowingly false statement by a politician, expressed with the intention to deceive.

These have been rare among Australian party leaders. And, until recently, confined to just the one party. But that may have to change.

This seems to be the tally among party leaders over the last 20 years:

There are two stand-outs in modern history.

Howard’s tawdry record was already a world-beater by 2004, according to veteran reporter Alan Ramsay:

'John Howard told a lie on May 2, 1995. Then he told more lies to reinforce the first lie. To protect himself from what he judged a serious threat to his last chance to be prime minister, Howard lied and went on lying. Now, three years later, he is telling still more lies to hide that first lie.'

Howard lied repeatedly to the electorate and to colleagues. It was a Liberal Senator who gave rise to the nickname ‘the lying rodent’.

Less than 2 weeks later, he categorically denied so doing to the ABC, and later repeated the lie to the Sydney Morning Herald. When the reporter confronted him with his signed personal guarantee, he said:

This was so brazen, it was widely said at the time he could kiss goodbye any ambitions to be prime minister”.

In 1998, the Australian Electoral Commission asked Abbott to disclose his donors, as required. To avoid doing so, he blatantly lied to the AEC, as revealed by Margo Kingston and others.

Asked in 2004 if he had met Cardinal Pell recently, Abbott told Tony Jones and the nation:

“Not that I can recall.”

He had met the cardinal just days before, as satirised brilliantly by the Chaser lads.

“Climate change is real, humanity does make a contribution to it and we’ve got to take effective action against it.”

One of those must be untrue, as Crikey exposes.

“Under Mr Rudd's scheme taxpayers will … pay a lot more, $120 billion over 10 years as opposed to $10 billion under our scheme.”

This was immediately challenged:

“Mr Abbott, you know that is not true …”

It wasn’t. And Abbott did know it.

Abbott lied to PM Gillard about his reasons for declining her offer to visit the troops together.

He confessed later that his false “jet-lag” excuse was because he was lost for words — as he also was soon after meeting the troops on his own:

Abbott told the Minerals Council and various others in 2011:

“By 2020 under current plans and current policies, China will have increased its emissions by 500 per cent.”

This was widely condemned as false.

Probably the most entrenched lie in current politics. People arriving with no documents, or even false papers, have the legal status of asylum seekers under international law. They are not “illegals”.

Abbott claimed mine plans were shelved due to taxes. False. He also lied about reading BHP’s announcement.

“Let’s not beat about the bush. To my mind, Tony Abbott tells lies.”

On the IAREM ranking of national economies: Greece is 55th, Australia is first.

“As long as a carbon tax or an emissions trading scheme damages our economy, without reducing emissions because it’s not being copied anywhere else, we would be crazy to go down that path.”

The Conversation found this false on two levels. It is not true the world is averse to carbon taxes. Nor that the carbon price damages the economy without reducing emissions.

14. Malcolm Turnbull and the internet

“Malcolm not only knows the internet, he virtually brought it to this country.”

“Just to get the regulatory approvals takes more than three years. Six years ago, it took less than 12 months.”

The Conversation found these “statements are incorrect.”

“The Howard/Costello Government … presided over what now seems like a golden age of prosperity — that’s been lost.”

“Malcolm (Turnbull) reckons that at the current rate of rollout it will take 80 years before the whole of Tasmania has broadband rolled out under this Government.”

Ridiculous nonsense. This was obviously not a "carefully scripted remark":

“In every recent election, state and Federal, the Labor Party has massively outspent the Coalition and this election is going to be no exception.”

19. Continual lies about debt spiralling out of control

Australia’s debt is low by global standards. The Abbott Government has raised the level of debt and abolished the debt ceiling.

20. Deals with the Greens

Before the 2013 election, Abbott said:

The opposite of the truth.

Abbott promised the Greens the same concessions in the 2010 post-election horse trading as did Gillard. They just couldn’t trust him to keep his word.

And in December, the debt ceiling was abolished in a deal with the Greens.

Kevin Rudd asked Abbott last September if his daughters would also be living in the Lodge.

“The short answer is yes, because they don't want to leave home until such time as they get married.”

Daughter Louise had already moved in with her boyfriend. Abbott knew that.

“... he has by repute been the first senior cleric in Australia to take this issue seriously.”

Plainly false. Many senior Catholics have been far more pro-active, including former Sydney bishop Geoffrey Robinson who quit in 2004 in disgust at non-action by Pell and others.

“It’s good that Mr Rudd … committed the Government to a new effort to boost productivity … but he’s never actually taken the steps needed to convert aspiration into achievement.”

Productivity increased dramatically for four quarters in 2009. It then stalled briefly as the GFC took effect.

Since 2010, productivity has increased for a record 12 consecutive quarters to an all-time high.

“Tax reform starts with abolishing the carbon tax and the mining tax, which have done so much to spook investors, threaten jobs and hurt every family’s cost of living.”

Three fibs in one sentence.

“At the Press Club recently, Mr Rudd declared that the mining boom was over and that Australia needed to be ready for life afterwards.”

False. Mr Rudd specifically affirmed that “the China resources boom is over”. There is a difference. Australia has other customers.

“That 74,000 hectares is not pristine forest. It's forest which has been logged ... it's plantation timber that was actually planted to be logged."

The ABC factcheckers found this to be 'Not true'.

The ABC factcheckers said this was 'Wrong'.

How this sorry record impacts Australia’s social fabric should be worth examining.

Coming soon: Is Australia run by compulsive liars? Part three: Will Shorten have to learn to lie like Howard and Abbott to get the top job? You can follow Alan Austin on Twitter @AlanTheAmazing. 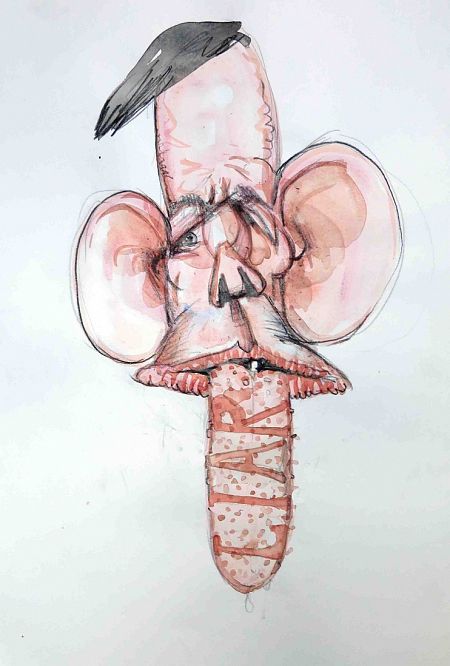