The recession we didn’t have to have

In the future they will call it the Hockey Recession, says Bob Ellis, and wonder at the sort of fanatical economic terrorists who were running Australia.

AFTER IT HAPPENS it will be called the Hockey Recession.

The Hockey Recession. The one we didn’t have to have.

It will be known too that keeping Holden here till 2025 would have cost each taxpayer ten dollars, or three café lattes, a year and Joe thought this an unacceptable price, and it was better that a half million lives be injured than we pay that sum for our national salvation.

It will be known too that he could have saved SPC Ardmona, and with it the Goulburn Valley and another hundred thousand livelihoods, by asking us to pay the price of two café lattes just once this decade and never again — or maybe never again.

These are the acts of a fool, that go far beyond fundamentalist fanaticism.

They are the acts of a suicide bomber, like Slim Pickens in Dr Strangelove riding the A-bomb down into Russia and whooping and whacking it with his hat as he ends human life on the planet, pleased he is doing so.

It is hard not to think him a damn fool and he must, in the shaving mirror, himself suspect that something is wrong.

Will Joyce, Macfarlane, Turnbull and Heffernan join Sharman Stone in wanting him gone? Will the Senate refuse him Supply? Will the GG summon him, and ask what he things he is doing?

It is an unusual moment of national clarity.

Something big must happen, and happen soon. 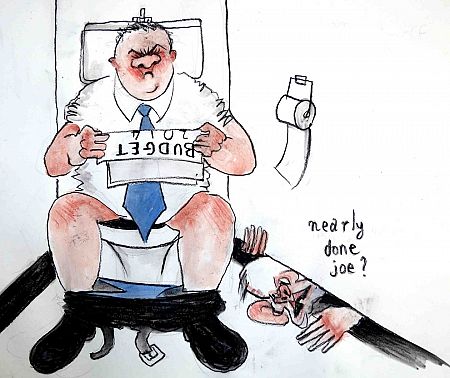