The Pentecostal Prime Minister and the Jerusalem embassy stunt

While the Jerusalem embassy stunt failed to secure Wentworth and may incite terrorist attacks, it does further the fulfilment of the Pentecostal “end times” prophecies, writes Dr Jennifer Wilson.

THE IDEA that the Australian Government should take a new direction on the relocation of our embassy from Tel Aviv to Jerusalem seemingly came out of nowhere, in the dying days of the Liberal Party campaign for the seat of Wentworth.

More than 12 per cent of this electorate is Jewish. Prime Minister Morrison’s baffling announcement, apeing the earlier decision of U.S. President Donald Trump, was largely regarded as a desperate attempt to court the Jewish vote and save the blue-ribbon Liberal seat. However, Dave Sharma, formerly our ambassador to Israel, lost the seat to Independent candidate Dr Kerryn Phelps, thus depriving the Government of its majority in the House of Representatives.

Morrison’s impetuous suggestion was made without any discussion with the Department of Trade and Foreign Affairs or apparently anyone other than Mr Sharma. It provoked an angry reaction from the Indonesian Government, putting at risk the $16 billion trade deal with our nearest Muslim neighbour — a deal that has been in the works for eight years.

Morrison has now announced what he no doubt perceives as a compromise. Australia will recognize West Jerusalem as Israel’s capital, retaining our embassy in Tel Aviv for the time being. We will establish a defence and trade office in the city’s West and begin the search for a new embassy site. The Government will also recognise a future state of Palestine, with its capital in East Jerusalem, after a two-state solution has been reached.

On the heels of this announcement, DFAT issued travel warnings for Australians planning to visit Indonesia. 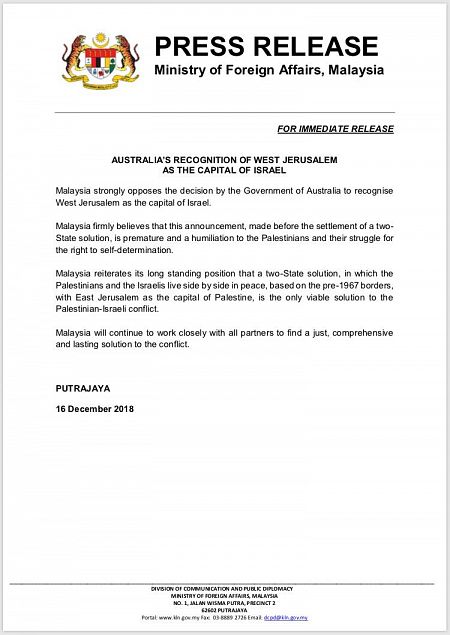 The question Australians might well ask is why did Morrison hurl himself (and us) into this quagmire in the first place? There was no reason for Australia to noisily insert itself at this time. A blind and misplaced aspiration to tag along with Trump and a chance to seduce the Jewish voters of Wentworth, who support embassy relocation, are two possible explanations.

Also worthy of consideration as background to his decision is the question of Morrison’s religious beliefs. The Prime Minister is a member of the evangelical, Pentecostal Christian Church. The Washington Post estimates that half of Pentecostal Christians support Israel because they believe it is important to the fulfilment of “end times” or "Rapture" prophecies.

These prophecies predict the second coming of Jesus Christ — a time when believers will flourish and non-believers will be culled. Jerusalem is regarded as the biblical capital of Israel through an eternal promise given to the Jews by God and as the “touchstone” of end times prophecies. Evangelicals also believe that the existence of Israel fulfils the prophecy of the second coming.

U.S. Vice President Mike Pence is a fervent follower of this doctrine and is widely thought to exercise considerable influence over the godless Trump, in his effort to cultivate and secure the religious vote. “Trump has handed Israel policy to the evangelicals", claimed The Forward's Jane Eisner, as speculation on the extent to which Pence’s beliefs determine the administration’s policies intensified earlier this year.

For an evangelical Christian Zionist such as Scott Morrison, recognition of Jerusalem as Israel’s capital and the eventual relocation of the Australian embassy to that city is a mark of progress on the journey towards the desired second coming. It is an announcement to the global Pentecostal movement of one more step in the creation of circumstances required for the Rapture to unfold.

Morrison was perhaps not signalling his support for Trump as much letting his fellow Pentecostals know that, as a political leader on the global stage, he is committed to furthering their ambition to prepare Jerusalem, as required by God, for the second coming of his son.

Is it just me, or this seriously scary shit? Prime Minister Morrison and the Pentecostal agenda https://t.co/4wvImtahhc @IndependentAus

It is alarming for those not of that faith to be forced to consider the possibility that Australia’s allegiances, like those of the United States, are determined by our current Coalition Government in accordance with what might appear to be the fanatical and unhinged beliefs of our current Prime Minister. Rapture? End times? Precisely what is the place of these fantasies in Government?

However, it is rarely one factor that determines political decisions. And in the case of this most recent Morrison fiasco, it’s likely that the Prime Minister has, entirely accidentally, happened upon a decision that has the potential to fulfil more than one of his needs. I say “accidentally”, because absolutely nothing in this man’s history indicates an aptitude for strategic thinking. He is the most accidental of accidental leaders and can be said to have thus far lived something of a charmed life, blundering and bullying his way from one job to the next, leaving chaos in his wake, yet still managing to remain upwardly mobile.

It’s a cliché to observe that failing governments love war and terrorism. It’s one worth repeating in the context of Morrison’s Jerusalem decision. As noted above, only hours after the announcement, DFAT issued travel warnings for Australians planning to visit Indonesia. Malaysia may be next.

When Morrison first flagged the direction in which his meanderings were taking him, ASIO warned that the relocation of our embassy could cause unrest, targeting Australian interests. The Indonesian Foreign Minister Retno Marsudi said the proposal was “slapping Indonesia’s face” and “affecting bilateral relations". Indonesia also warned that the move would increase Australia’s vulnerability to terrorism, predicting violent protest against what will be perceived as an insult to Palestine and interference in the peace process.

A terrorist attack, or a significant threat, is likely the only thing that might give Morrison a small chance against the Labor Party in the run-up to the 2019 Federal Election, due to be held in May. It would certainly give him a splendid opportunity to bloviate on national security, border protection, murderous immigrants and "stopping the boats". It would also give him the chance to display himself as the Prime Minister of a country under attack — a situation welcomed by failing leaders as a gift from God. Indeed, such a circumstance would inspire the entire Government, particularly Home Affairs Minister Peter Dutton.

Whether or not Morrison’s announcement on Jerusalem will provoke terrorist attacks on Australians at home and abroad remains to be seen. What must be noted is that Morrison is prepared to take that risk, for no reason that makes any sense — unless you’re a Pentecostal or Jewish Zionist, or Donald Trump. This is the measure of the man who is our Prime Minister. He has – either out of political ambition, religious fanaticism, alarming impulsivity or what is more likely, a poisonous cocktail of all three – decided to put Australians in harm’s way through terrorism, or economic retaliation. It’s likely the Prime Minister dimly believes that this cocktail will in some way advantage him. It is unlikely this decision is the product of intelligent thought.

Morrison has no idea what the ramifications of his decision will be and we have every reason to believe he does not care. He has had warnings from a variety of sources and he has ignored them all.

As many have observed, there is perhaps no more sensitive issue than the status of Jerusalem, yet Morrison seems either unaware or uncaring of this sensitivity and has united with Trump to 'smash a long-standing international consensus in a disruptive and dangerous way.'

Why would moving the US embassy to Jerusalem be so contentious? https://t.co/5lNR4hXqzl

Saving Wentworth with the embassy stunt failed miserably as a strategy. We have no reason to believe it worked as a suck-up to Donald Trump either. It has the potential to incite terrorist attacks against us, so we can count it a failure on that front.

In fact, the only demographic to be gratified by Morrison’s decision is the global family of Christian Zionists, who have now, in their eyes, moved one step further towards their Rapture. They haven’t arrived, as their God demands all of Jerusalem, not just one piece of it. However, they now have two leaders strutting the global stage who are clearly on their side.

For the Jewish Zionists who believe in God’s promise of an eternally undivided city, recognition of West Jerusalem as their capital is not what they ultimately seek. Morrison made his announcement on Shabbat, the Jewish Sabbath, a day when observant Jews do not engage with the world and, at time of writing, no direct comment from the Israeli Embassy is available.

Arguments against religion in politics have never been so pertinent and so urgent. In the event that bad things happen, let not anyone forget that our very own Prime Minister engineered the situation.

Send Morrison to his political end times. He is a clear and present danger to our welfare.