If Malcolm Turnbull was unaware of the Joyce affair, how can he also claim to have a "close working relationship" with his Coalition colleagues, asks Belinda Jones.

As the birth of Vikki Campion’s first child (believed to be due in April) nears, it remains apparent that so many "facts" about the Barnaby Joyce/Vikki Campion affair just don’t add up.

Firstly, when exactly did former Deputy Prime Minister Barnaby Joyce separate from Mrs Natalie Joyce? I have not heard one mainstream media journalist ask that question.

Secondly, what did Prime Minister Malcolm Turnbull know about the affair and when?

Though many have grown weary of this political reality show, these questions remain unanswered and have serious implications for the strength of the Liberal National Party Coalition and the voting public.

So, when did Barnaby Joyce separate from his wife? The removal of one’s wedding ring is usually a reliable indication that separation has occurred.

Barnaby Joyce wore his wedding ring for his entire political career — that is, until sometime between 11 and 18 October 2017, according to Joyce's Facebook posts below:

Cross-checking this timeframe with Joyce’s official expenses confirms that during that period he travelled from Canberra to Sydney to Tamworth on Friday, 13 October 2017, then returned to Tamworth via Sydney and Canberra on Sunday, 15 October 2017. 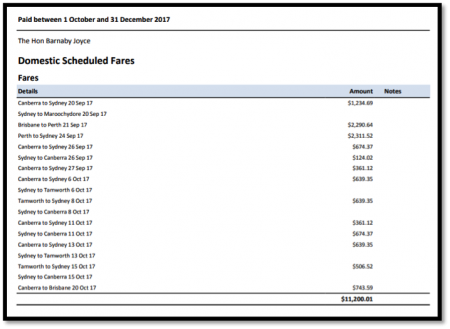 It is likely that it was that particular weekend when Barnaby Joyce told his wife of 24 years that Vikki Campion was pregnant with his child and their marriage was over. Natalie Joyce, by all reports, did not react to the news well, as one would expect.

These revelations caused a bitter estrangement between Barnaby Joyce and his wife and daughters. Natalie Joyce had been aware of the affair and had even publicly confronted Vikki Campion on a Tamworth street in April 2017, accusing her of being a "homewrecker".

Natalie Joyce and her daughters’ conspicuous absence on Barnaby Joyce’s New England by-election pub-crawl campaign, was later widely noted, yet not one word was uttered in the mainstream media at the time.

On 2 December 2017 – polling day in the New England by-election – it was Barnaby Joyce’s elderly parents who were the sacrificial lambs to the media, not the previously supportive Natalie Joyce and their daughters.

Further examination of Joyce’s expenses revealed that he had claimed for a "family member" who also flew from Canberra to Sydney to Tamworth on Friday, 13 October 2017, returning on Sunday, 15 October.

Barnaby had already moved out of the Joyce home.

So, who was the "family member" travelling that weekend with Barnaby Joyce?

It is around this time Vikki Campion took paid leave due to stress from Member for Murray Damian Drum’s office. Once an employee, her travel expenses were previously categorised as "employee" expenses. No longer falling into that category, did Joyce take her along on his "break-up weekend" and later claim her travel expenses under "family" entitlements? Was it that particular weekend she was elevated from "lover" to "partner"?

Barnaby Joyce admitted in his marriage equality speech to the House of Representatives, on 7 December, that he believed in traditional marriage even though he was "no saint".  He went on to publicly admit for the first time that he was separated from his wife, so that’s on the record.

That admission came five days after polling booths closed for the New England by-election on 2 December 2017.

Despite separating more than six weeks before the by-election, Barnaby Joyce failed to mention a word to the electorate; nor did the mainstream media, despite the affair trending on Twitter.

The Prime Minister claims not to have known anything more than rumours. This indicates two possibilities.

The first is that Malcolm Turnbull is lying about what he knew about the Joyce separation and when he knew it, in addition to feigning concern in February 2018 for Natalie Joyce and her girls while he had knowingly been approving the affair to be funded by the taxpayer — including approval for domestic and overseas travel.

Or, the Coalition is in such a state of disarray that, despite the fact that these two men kept up the façade of working together closely enough to run the country and campaign together, Joyce failed to inform his Prime Minister of the affair. Not once in six weeks did Joyce mention his separation (if the Prime Minister is to be believed). A political sex scandal that destroyed the marriage of one of our staunchest Catholic, conservative politicians, who had an illegitimate child on the way and that just didn’t happen to come up in conversation? Not once in six weeks?

Was the Prime Minister aware his Deputy was having the taxpayer foot the bill for travel expenses of Joyce’s pregnant lover under the category of "family"? If he claims not to have been aware then how can he also claim a "close working relationship" with his Coalition partners? He simply cannot have it both ways.

And, yet the Prime Minister claims to have known nothing more than rumours. Inconceivable.

This just hit the mainstream media - they're on the ball! Why Barnaby Joyce’s private life is a matter of public interest https://t.co/LejT0yGmc1 @IndependentAus @noplaceforsheep

"Getting anyone to talk about this allegation is like pulling teeth"

18 October 2019, 7:00am Belinda Jones reveals the economic mismanagement behind the Coalition's promised $7 ...

Pork-barrelling drought funding: A new low for the Morrison Government

4 October 2019, 8:00am The Morrison Government is promising funds for drought relief, but a closer look ...
Join the conversation
comments powered by Disqus
News updates