The Government’s new immigration legislation is political dressing that is not going to “stop the boats”, says community consultant and former SBS reporter Graham Hardy. 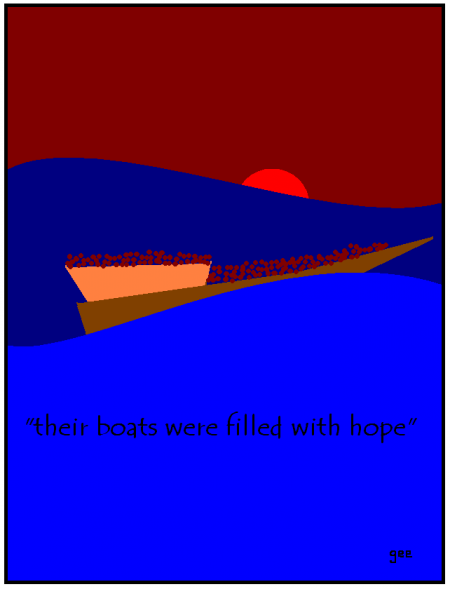 WILL the boats stop coming? No.

Will the number of boats decrease? Probably. The numbers will probably decrease in the short term, but in the long term, they will probably increase. And more people will drown.

The answers to these fundamental questions are to be found by close scrutiny of the report by the Expert Panel on Asylum Seekers and to the Government’s comments on it.

The most important element in the Panel’s report is not the off-shore processing at Nauru or Manus Island, but the system of incentives and disincentives.

Now stop there. Let’s do a reality check. To a former Chief of the Defence Force Air Chief Marshal Angus Houston and to former diplomat and head of the Department of Foreign Affairs and Trade, Michael L'Estrange, a system of incentives and disincentives would be sure to work for anyone who was rational (assuming full knowledge of consequences and availability of options).

But would it make sense to a refugee? It is important to remember that refugees do not voluntarily leave their country of origin. Rather, they are forced to flee because of persecution. How many refugees have the ability to choose and the knowledge of options? Some would; a high proportion wouldn’t.

One disincentive to pay money to a people smuggler will be the “no advantage” provision which means that asylum seekers who arrive by boat will not be given a visa any sooner than if they had applied overseas. Even if the processing of their application is completed, they will be kept in detention.

How long will the wait be? Astonishingly, Prime Minister Julia Gillard, and the Panel were unable to say. Ms Gillard explained that the Department of Immigration would estimate how long it took for an asylum seeker who applied overseas to get a visa, and then apply that term to the “irregular maritime arrivals” held on Nauru or Manus Islands.

So let’s do a rational choice check. If you were an asylum seeker, would you wait as an illegal in Indonesia or Malaysia, or would you prefer to take your chances in an Australian detention centre, albeit on Nauru or Manus Island?

The Greens spokesperson Senator Sarah Hanson-Young pointed out that in Malaysia the waiting list is “currently 76 years”. While that presumably is a theoretical estimate, her point is that

“…people will always be looking for a safer option, if where they are is untenable — and currently, in Malaysia and Indonesia, it is untenable for people. They arrive and try and get their claims assessed by UNHCR. This doesn’t happen.”


Let’s look at another disincentive:

“The panel recommends that in future those who arrive in Australia through irregular maritime means should not be eligible to sponsor family under the SHP but should seek to do so within the family stream of the Migration program.”


Well, that would, of course, discourage anyone fleeing persecution, wouldn’t it? And people smugglers would be sure to explain the consequences of being one of their customers, wouldn’t they? And they would explain the difference in waiting time between the Special Humanitarian Program and the family stream of the Migration program, wouldn’t they? Or would this “disincentive” be an incentive for refugees to also bring their family in by the same boat or subsequent boats?

Well, if that all makes sense to the former department heads Houston and L’Estrange, and to a Government who wanted the issue out of the way before the next election, and to an Opposition who wanted to crow about being right all along, would it make sense to Paris Aristotle ?

Paris Aristotle is justly renowned for his pioneering work as the Director of the Victorian Foundation for Survivors of Torture.

What was in the Panel’s report for Aristotle? Well, the Panel has recommended an increase in the intake in the Humanitarian Program to 20,000 per year with a minimum of 12,000 refugees (double the current allocation).

But the Panel has also recommended “support of the further development of a regional co-operation framework” and “expand its relevant capacity-building initiatives”. In plain English, the panel hopes that countries like Indonesia and Malaysia would co-operate with providing application facilities and protection for asylum seekers and, in return, Australia (and hopefully other countries) would take a greater number of asylum seekers.

“We’ve recommended that there be monitoring by high level groups comprising cross-party membership, experts from non-government sector or academia, senior officials who would monitor or oversight the adherence to the conditions of any transfer arrangement or international obligations.

“We’ve recommended there be legal advice, a review process and a full suite of services, and in addition to that, we’ve recommended a substantial increase in humanitarian program that would create more places that would be available across a regional processing network.”


But, astonishingly, he also could not guess at how long an asylum seeker would stay in a “transfer centre”. He told an interviewer he could only say he didn’t anticipate that they would not have to stay up to four or five years as had occurred in the past, resulting in severe cases of mental illness which his Foundation had reported on.

So, would more asylum seekers be treated more humanely? Certainly the increase in number of places for asylum seekers would benefit those who gained them.

But there are 15 million refugees in the world. For each person we give asylum, there will be another just as worthy, just as needy, who also needs asylum.

Will they be tempted to pay people smugglers money they don’t have, to risk the lives of themselves and their loved ones, even if they end up in “transfer centres” on Manus or Nauru?

The Panel Report recommends that Australia as a matter of urgency seeks greater cooperation with Indonesia on “enhanced cooperation on joint surveillance and response patrols, law enforcement and search and rescue coordination.”

Logically, this wouldn’t be so urgent if the proposed incentives and disincentives would actually stop the boats.


I offer, for consideration, this proposal to defeat the business model of people smugglers and provide more humane treatment of refugees. Its premise is that there are more refugees than Australia can accept.

I request acknowledgement of receipt and some initial reaction.


Regional solution to defeat the business of people smugglers

Australia offer incentives and assistance to apply for refugee status at overseas offices. These include a ballot for fast-track processing (similar to the ballot for an U.S. Greencard).

Australia make it easy to apply for asylum at off-shore offices, located as close as possible, on known refugee migration routes.

These offices be either Australian or UN offices, funded and staffed by Australia.

Arrivals by boat, who are refused asylum but unable to be relocated, offered humane long-term accommodation and the chance to prove their acceptability in Australia (probation conditions).


Regional solution to defeat the business of people smugglers

a) where ever appropriate e.g. Malaysia, Indonesia

b) Australian staffed and funded, UN linked or UN auspiced

a) priority for children & women

b) subsidised in part, paid for in part, by applicants

3. Ballots each month to determine AAO applications to be fast-track processed (either in Australia or in application country):

5. Removal of Applicants from Accommodation Centres, before outcome of decision announced, to either successful applicant refuge centres or non-successful outcome centres.

a) Skills assessment, recognition and adaption program for resettlement e.g. in isolated Australian mines, or to teach in Timor, PNG, Africa etc.

a) Arrivals, who did not pass through close proximity to off-shore Asylum Application Offices, are assessed as soon as possible.

b) Arrivals who are reasonably believed to have passed through close proximity to off-shore AAO’s, do not have their assessment begin for a penalty period (e.g. one-year).

c) All detention centres are improved to include work, language & skills training.

8. Long-term accommodation, for those whose assessment does not start immediately or are unable to be re-located after unfavourable assessment. Incentives and disincentives not to abscond.

b) Skills training (e.g. language, computers, trades, heavy machinery ) which is provided on a deferred payment basis similar to HECs.

d) A maximum period of detention (e.g two years) then allowed residency in the community subject to good behaviour and repayment of deferred payments.

For further information and/or development of this proposal: contact Graham Hardy

Why I dreamed I would see Joe Hill one night