The new coronavirus threat to the world is the USA

The epicentre of the coronavirus pandemic has shifted from Wuhan, China, to Italy and now to the USA. Alan Austin reports.

IN HIS White House press briefing on Friday (10 April), President Donald Trump made many bizarre assertions about the coronavirus pandemic. Several were dangerously wrong.

The falsehoods most obvious to informed observers were Trump’s assurances that everything possible was being done and the crisis was virtually over. This was conveyed via terms like “incredible” used 14 times: “It’s been really incredible what’s been happening”. Plus the word “tremendous” used 23 times: “We have tremendous plans” and “We are doing tremendous testing”. The word “great” was used 81 times: “We are in great shape in every way” and “We’re doing great. Number one in the world".

And the never-ending self-congratulation:

"I watched a certain network, and it wasn’t Fox, and you had doctors saying that we’ve done an incredible job.”

The reality is that America’s response to the pandemic has been disastrous.

The latest data shows that the USA:

These grim realities are masked by the fact that many European countries were hit hard very early and still have higher deaths per million people.

Among all 51 very highly developed major countries (above one million population), the USA currently ranks 42nd – or tenth from the worst – on deaths per million. That seems not too bad until we note that the 14 worst-hit countries are all close to France and Italy — except the USA. (Comparisons here are with highly developed countries for which we have reliable data.)

Now here’s the thing. Mass infection in Northern Italy first appeared in late January. But by then countless visitors to that region had returned home infected. Anyone can drive or hitch-hike or take a bus or a train from Italy to France or Switzerland or Austria in a matter of hours. No borders. No passport checks. And certainly no health checks.

Hence it was inevitable that all Italy's neighbours would soon be devastated. That happened — and swiftly.

But distant countries which receive travellers from Italy only by plane or ship were able to put restrictions and quarantines in place. Many did. This is why 19 of the very high development major countries outside Europe have death rates averaging 3.1 per million.

But the one which did not heed the warnings now has a death rate near 62 per million, 20 times higher as shown by this graph: 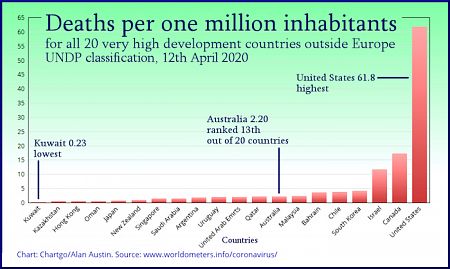 Most Americans are unaware of these facts, however, because the Trump Government is loudly proclaiming the opposite. Thus there is little pressure for policy changes.

The quotes detailed below are from Trump’s Friday press briefing.

Lives are not being saved

“We’re seeing clear signs that our aggressive strategy is saving countless lives. Tremendous progress is being made.”

“I spoke with the governor of Louisiana. And, as you know, we’re building them additional beds right now ... I don’t think they’re going to be using very many of them, and that’s a good thing.”

Trump has no idea how many beds Louisiana will need. On Friday, Louisiana recorded 970 new cases and 53 more deaths. Louisiana now has the third-highest infection rate and death rate, behind only New York and New Jersey.

Numbers are not flattening

“In New York, we’re seeing hospital admissions declining very substantially, as I said.  And nationwide, the number of new cases per day is flattening substantially, suggesting that we are near the peak and our comprehensive strategy is working.”

“We’re leading the world now in testing, by far, and we’re going to keep it that way.”

After an extraordinarily slow start, the raw number of tests performed is now the highest, at 2.6 million. This is to be expected in the world’s largest developed country by far. But it is nowhere near the best relative to population. The 35 countries with the highest testing rate per million are shown in the yellow chart, below. The USA ranks 34th — down from 32nd last week, having been overtaken by Russia and Finland. 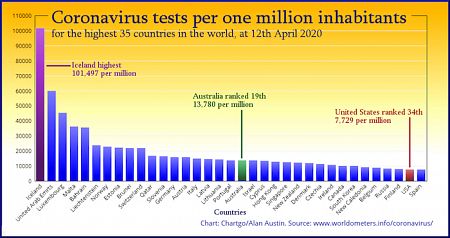 Industry not deployed in time

“We have harnessed the full power of American industry to produce ventilators and other essential supplies. Right now, we’re making thousands of ventilators, many of which we won’t need, but we’ll use them in our stockpile.”

Trump refused to engage industry until far too late. When New York was unable to get sufficient supplies from American manufacturers last month, the Governor appealed to other countries for help. Through local business connections, the Government of China donated 1,000 ventilators.

Gov. Cuomo Says Chinese Government Delivering 1,000 Ventilators to New York.
This is humanity. In times of crises, we stand together.https://t.co/wGsrz4olCG

The myth of collaboration

“Last night, they had a group of 14 governors ... and they said, ‘It’s been unbelievable what’s happened’ ... People are — people can’t even believe the job we’ve done.”

Several governors are on the record openly criticising the White House for its manifest failures.

Trump proves why he shouldn’t be conducting the daily press briefing, as he equates the Coronavirus to a germ (it’s a virus) and claims its become to smart for antibiotics to work against it (antibiotics fight bacteria). pic.twitter.com/61vQIHBeDP

Alan Austin’s defamation matter is nearly over. Read the latest update here and help out by contributing to the crowd-funding campaign HERE. You can follow Alan Austin on Twitter @AlanAustin001.

Since Trump lied during the press briefing today, let’s roll the video where he calls the #CoronaVirus a hoax. Why lie when you said it in front of thousands of people - ON CAMERA!?#Trumpvirus 😷#Pencedemic😷