The myth of Australian parliamentary democracy

​Writing in 'The Lucky Country', Donald Horne diagnoses the sickness at the heart of Australian democracy — the dictatorial power of a tiny, yet powerful, elite, who wield power through anti-democratic major political parties. Sadly, nothing has changed for the better in Australia's system since he wrote these words, almost 50 years ago. 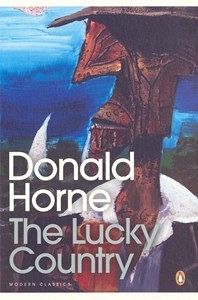 It is hard to escape the conclusion that in Australia Parliaments are now mainly of ritualistic significance and that the significance of the peculiarly parliamentary part of Australian democracy is quite slight. A political leader achieves leadership through his party and normally he then uses his position and power of patronage to dominate, or attempt to dominate his party machine, and rebels work through the party machine to try to affect the policies of the leaders. ln this power situation Parliaments are subsidiary, it is through the parties that political changes are effected— if they are effected at all.


Power within the parties is not gained by any significant appeal to mass membership. There isn't a mass membership. Party branches are small and, with exceptions, moribund. Power within a party is usually gained by secret contrivance and manipulation. Except in the sense that the rival party machines have to submit themselves to regular parliamentary elections, the idea that Parliament represents the people is simply one of the fictions of Australian public life — as is the idea that Parliaments have any particular relation beyond a ceremonial one to the administration of the Commonwealth and the States. All that happens is that the people have a veto, they can keep one of the party machines out of office — at the cost of putting the other party machine into power. And when a party gains power it uses its Parliament as its legislative and propaganda instrument.

(Read about IA managing editor David Donovan's idea to break the stranglehold of political parties over our system through the use of an "anti-party" by clicking here.)
DEMOCRACY David Donovan Democracy Donald Horne party membership
Recent articles by David Donovan

3 June 2021, 8:00am The mainstream media have picked up yet another IA investigation — proving yet ...
Join the conversation
comments powered by Disqus
News updates