Towards a true democracy with the Australian Independents

How to cure the disease at the heart of Australia’s democracy? Managing editor David Donovan advocates the injection of an “anti-party” into the body politic.

Let’s talk about how we can break the stranglehold political parties have over our political system and establish, or maybe re-establish, true representative democracy in Australia. It won’t be an easy, or a quick, job — but with effort, commitment and maybe a little luck, it should be possible.

In case you are wondering what I am talking about, Australia’s journal of democracy, Independent Australia, has published several articles recently explaining why political parties are a worm that has burrowed into the core of our body politic, and is rotting it from within. But in case you have come into this debate late, let’s summarise the problem.

Our system is set up so that we elect politicians to represent the interests of our community or state. Unfortunately, almost all our politicians come from one of two major political parties — one claiming to represent “workers” and the other tending towards “business” interests.

Because of conditioning – and other factors – people almost always automatically vote for one of these two parties so that one of them becomes the government. And because MPs almost always vote as a bloc, along party lines, the governing party is essentially the only one that can ever get any legislation passed through Parliament, and has only its members in the executive, thus establishing a “partiocracy” that exists until it can be broken at the next election.

Furthermore, because of mass disillusionment from the public in the political system due to the adversarial and sleazy reputation of politics and politicians, very few people join political parties thereby making these organisations unrepresentative of the wider community. Consequently, the quality of our elected representatives is relatively poor. Rather than attracting high quality candidates with real world-experience and accumulated wisdom, political parties usually attract people driven simply to develop a career in politics and who see loyalty to a party as a shortcut to success — as indeed it is.

Political parties are also a shortcut to power and influence for vested interests and lobby groups, since political parties also put the needs of major campaign donors, typically the unions and big business, before the needs of the general public, so as to ensure the continuing flow of significant donations. And, as a final insult, to ensure that there are no threats to their domination of the political process and power, both major parties collude to pass laws and regulations that ensure it is difficult, if not impossible, for minor parties or Independents to get elected — or at least in any significant numbers.

That is a quick overview, but you can read more about the rotten heart of Australian politics in the following articles:

In that last article listed above, on reforming Australia’s democracy, some ways in which we could change our system to give political power back to the people were listed, which included allowing Citizen Initiated Referenda in our system, like that which very successfully operates in Switzerland. Of course, as things stand now, political parties will never allow CIR to be implemented because it devolves power to the Australian people and would be a threat to their power — political parties are, of course, fundamentally anti-democratic in nature. 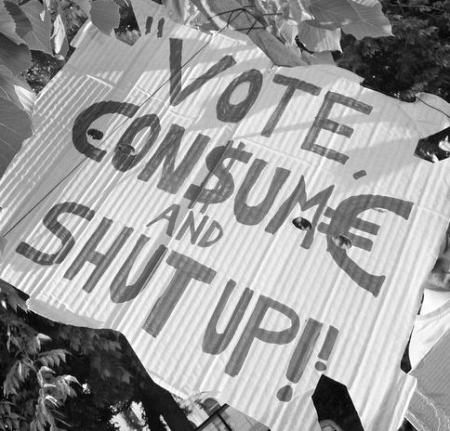 To overcome this, a way must be found to work within the parameters of the system as it stands — rigged though it is. To do this, the political system must be used against itself. Isolated Independent candidates, as we have seen, stand almost no chance of competing against well-funded, well-resourced, highly organised and institutionally entrenched party machines. To have any chance of beating candidates from these parties, the only option, therefore, is to create something that can challenge their organisational advantage. Therefore, I advocate the creation of an “anti-party” — a grouping of individuals allied solely for the purpose of challenging the existing party political power structures.

This political party – because it would need to be registered with the AEC as such to gain the advantages political parties have – must have only one policy,  democracy — or, more specifically, the election of quality candidates into Australian parliaments whose sole aim is to represent their constituents’ interests. A party made up entirely of Independents, who would have no ideology in common other than a commitment to true representative democracy — of looking after the interests of the people who actually elected them.

Of course, all this shouldn’t need to be done — representing constituents’ interests should, of course, be part and parcel of being an elected representative. Unfortunately, our system has veered so far off course there appears to be no alternative.

The party organisation would need no leader and would, I hope, have no leader — merely a steering committee aimed at publicising the goals of the organisation, raising funds and membership, and coordinating all the activities necessary to battle the interests of those who are dedicated to maintaining the status quo — and there will be no shortage of these.

These activities would, just for a start, involve finding the best candidates in each Australian electorate – experienced and capable people who would be passed over under the existing system — perhaps ones who find party politics and adversarial politics undemocratic and even distasteful. I envisage a selection process which would involve as many voters as possible – not just AI members – in each electorate participating to select the best candidate, perhaps in a way similar to the US primaries system. This process, of course, would also stimulate public interest, awareness and, hopefully, ownership of the successful candidate. And once the most popular candidate was selected, the organisation would work to implement a well-funded and organised campaign that would enable the electorate to get to know the candidate so they can compete on a level playing field with candidates from Labor and Liberal.

As a party, AI would be eligible to have candidates above the line in upper house elections — which is a massive advantage, as you will know if you have ever tried to number the telephone books you find if you want to vote Independent in the Senate.

And with a fair and non-partisan pre-selection process for Independents, many of the Independents not successful in the primary process will probably choose not to stand, thereby not fracturing the Independent vote and, moreover, saving themselves the $500 or $1,000 it costs to stand for election. Of course, nothing would stop them standing as a non-AI Independent if they so wished, though they wouldn’t be eligible for the campaign resources of the organisation.

Just to re-iterate, the party would have no policies apart from trying to get a candidate elected that would democratically and fairly represent the people of that electorate — and who actually will be pre-selected by them. Through the primary process, perhaps conducted online, a significant sample of each electorate would find the best person to represent them and their interests, whatever they may be –– thereby removing the organisation from the selection process.

And the AI would have no leader, as it would have no need of a leader — since the Party would be simply a loose venture of independently minded people allied for one simple purpose — democracy. The AI would not need and would not, one would hope, allow itself to have a leader — merely spokespersons willing to help get the message out to the community about what the organisation stands for (i.e. democracy), along with any other necessary information. And, in fact, virtually any AI member would be able to be a good spokesperson for this purpose, since the principles the AI would stand for – true representative democracy – are easy to explain and understand. Democracy is a simple concept.

If you are interested in helping create a quiet revolution in Australian democracy, just send an email to editor@independentaustralia.net and let me know your thoughts, or leave your comments after this article.

To form a political party in Australia, you need the signatures of 500 eligible voters. Not that many, really. But to gain success in Australia’s rotten political system, a new non-party would need a lot more support than that — a daunting task indeed, but one well worth the attempt.